Is Rising Dollar Good or Bad?

The relationship between the U.S. dollar and the stock market is one of the most complicated and confusing subjects.   Historically, stocks have done well during periods of dollar weakness and dollar strength.  The dollar’s impact on stocks needed to be filtered through the lens of the commodity markets.  A falling dollar, for example, can be bearish for stocks if it produces sharply higher commodity prices (as it did in the 1970s).  A falling dollar can coexist with rising stock price as long as rising commodity prices don’t create an inflation problem.  At the same time, a rising dollar can coexist with rising stocks as long as commodity prices don’t fall into a deflationary trap (as happened during 1998 and 2008).

This chart below shows that currently the stock market is rising with the dollar.  Since the 6-year dollar down trend line broke in September 2014, the co-efficient between SPY and UUP crossed from negative to above 0.  During the dollar correction phase, from the beginning of 2015 to the end of 2016, the SPY & Dollar relationship co-efficient weakened.  The co-efficient turned positive again on 12/16/2016. 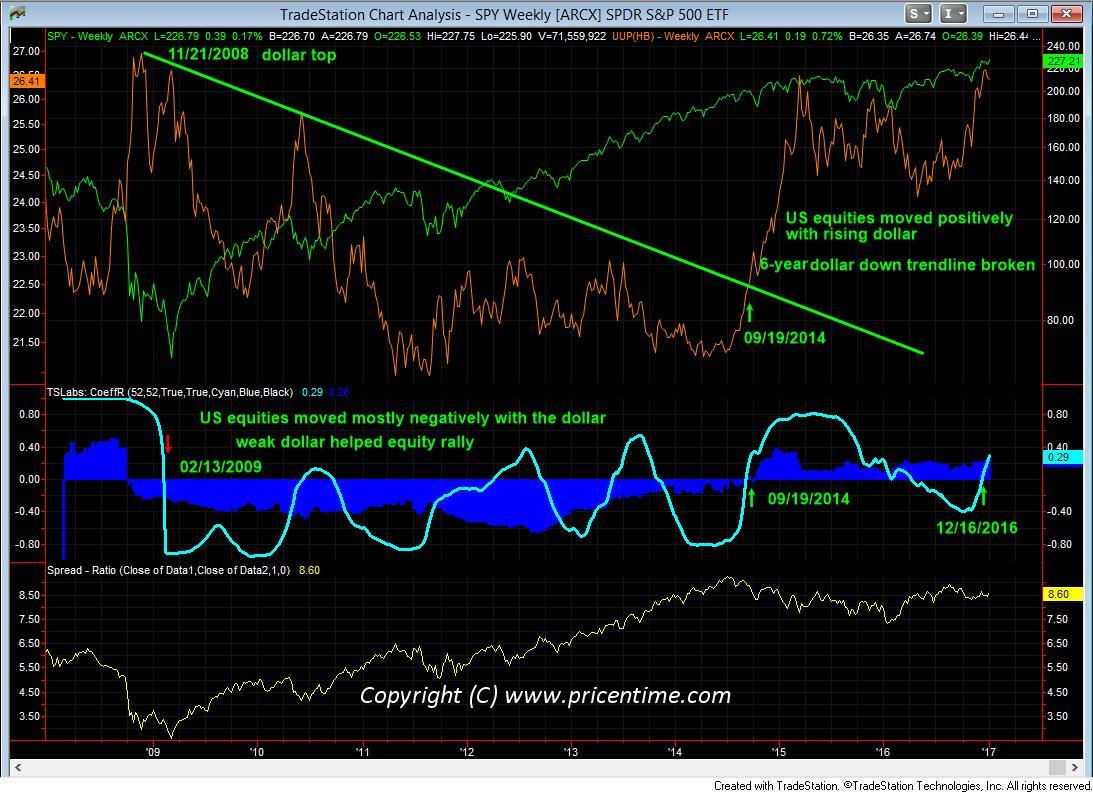 Let’s see what commodities are doing at the same time period.

Stocks and commodities are moving in the same direction since October 2015.  The relationship co-efficient is at 0.82, highly co-related.  Rising dollar is not causing deflationary pressure for the stock market yet. 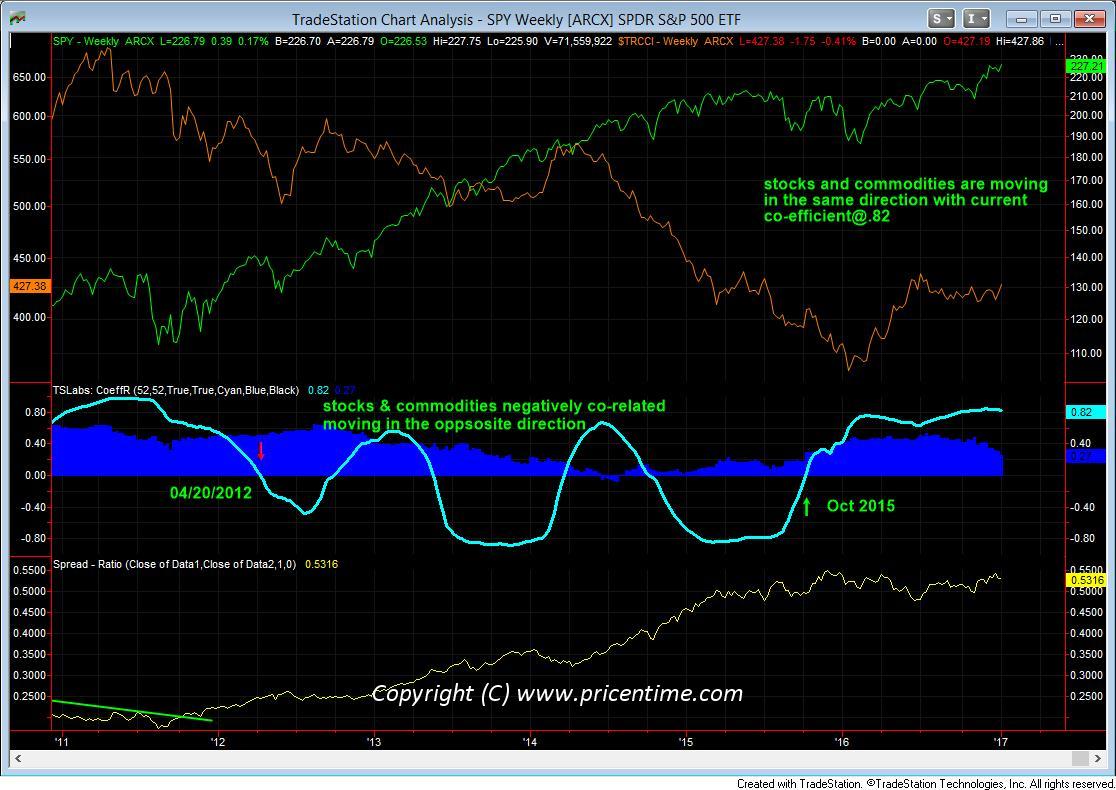 What about 10-year bonds?

Stocks and bonds relationship co-efficient became negative on 12/16/2016.  It is negative related.  Stocks and 10-year bonds are moving in the opposite direction. 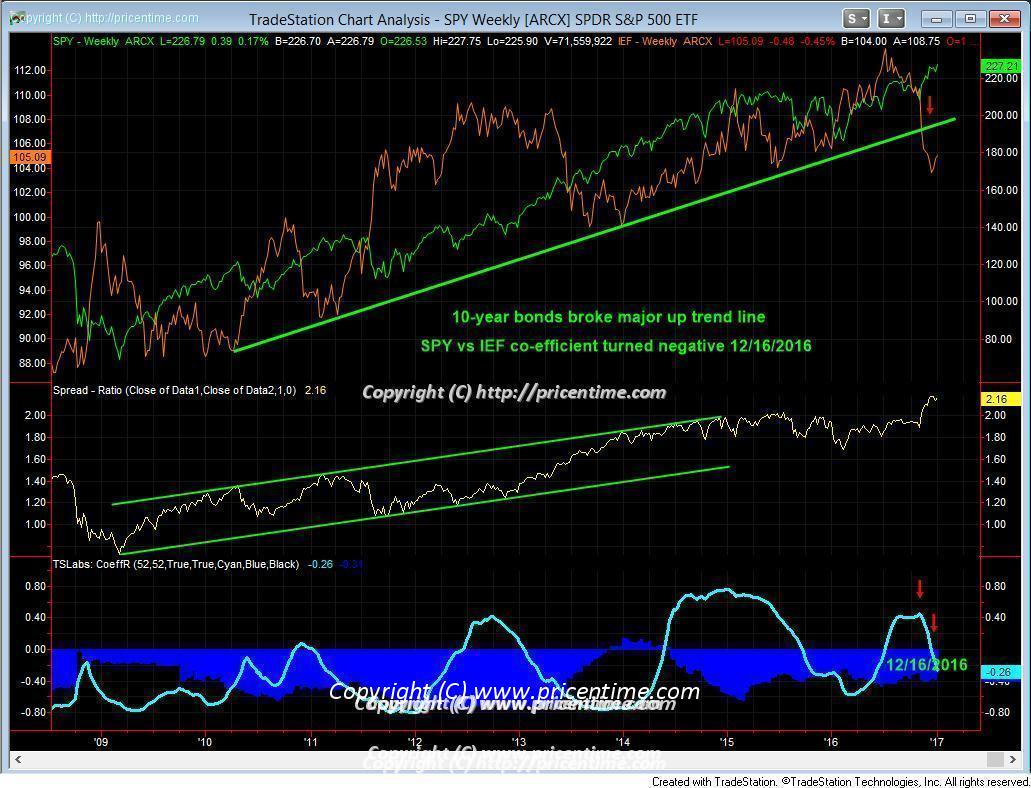 Gold is not an industrial commodity.  It is a perceived safe haven currency.  SPY and GLD co-efficient crossed above 0 on 10/9/2015.  They rose together for three quarters in 2016.  The co-efficient has not crossed below 0 yet, but it is on its way to be negatively co-related. 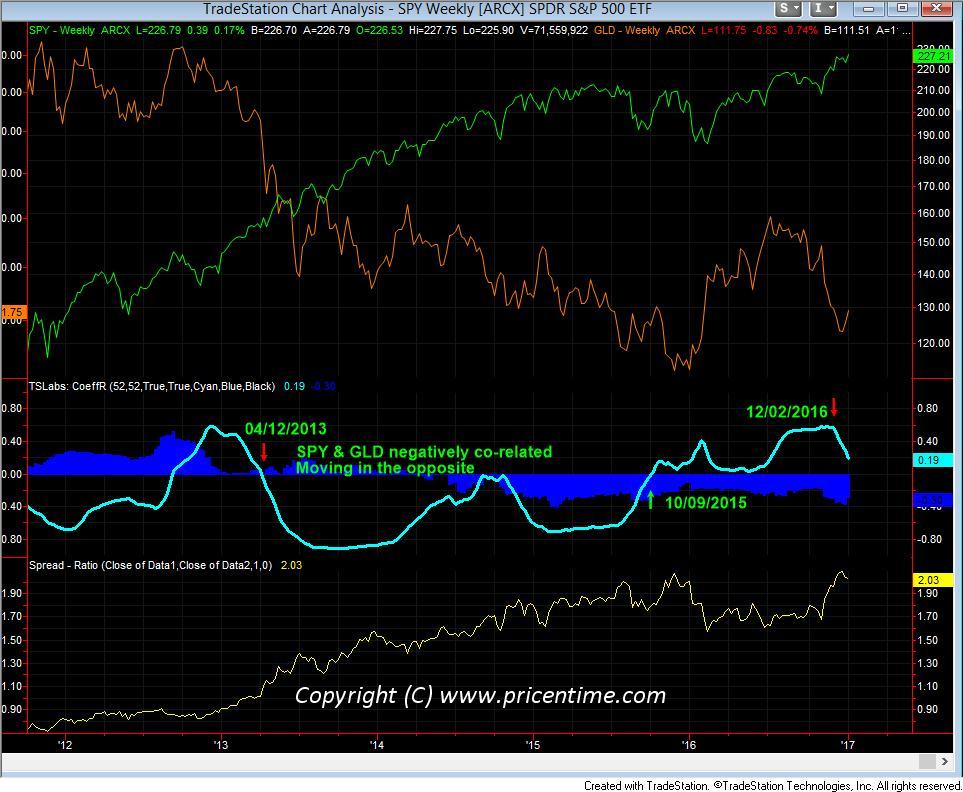 The relationships between stocks, commodities, dollar, bonds and gold indicate an early phase of economic expansion.  It’s risk on.

bonds commodity dollar gold stocks
This entry was posted on Saturday, January 7th, 2017 at 7:24 pm and is filed under Dollar. You can follow any responses to this entry through the RSS 2.0 feed. Responses are currently closed, but you can trackback from your own site.