We are currently 13 weeks into the 3rd weekly cycle of the new four-year cycle that started in February 2016.  The current weekly cycle has been unable to produce a sell signal despite that it has been trading sideways in the top timing band.  The market is climbing a wall of worry.  This condition has caused us to examine the seasonal cycle within the four-year cycle. We believe the seasonal cycle is distorting the current weekly cycle.  The current weekly cycle will be finished without the normal visible cycle shape.  It will be only detectable via de-trend tools because the strong up trend is distorting the cycle.  Out of the February 2016 seasonal and four-cycle low, it rallied for 7 months to reach the August 2016 seasonal high.  From the August 2016 high, it corrected for about 2.5 months to reach the seasonal low in November 2016.  From this November 2016 seasonal low, it is not uncommon for the market to rally minimum 7 months.  That will lead us to May 2017.  If we don’t see credible corrections in May 2017, the rally can last to August-October 2017 time frame.  That will set up a big sell signal, which will be more than likely the two -year cycle high. 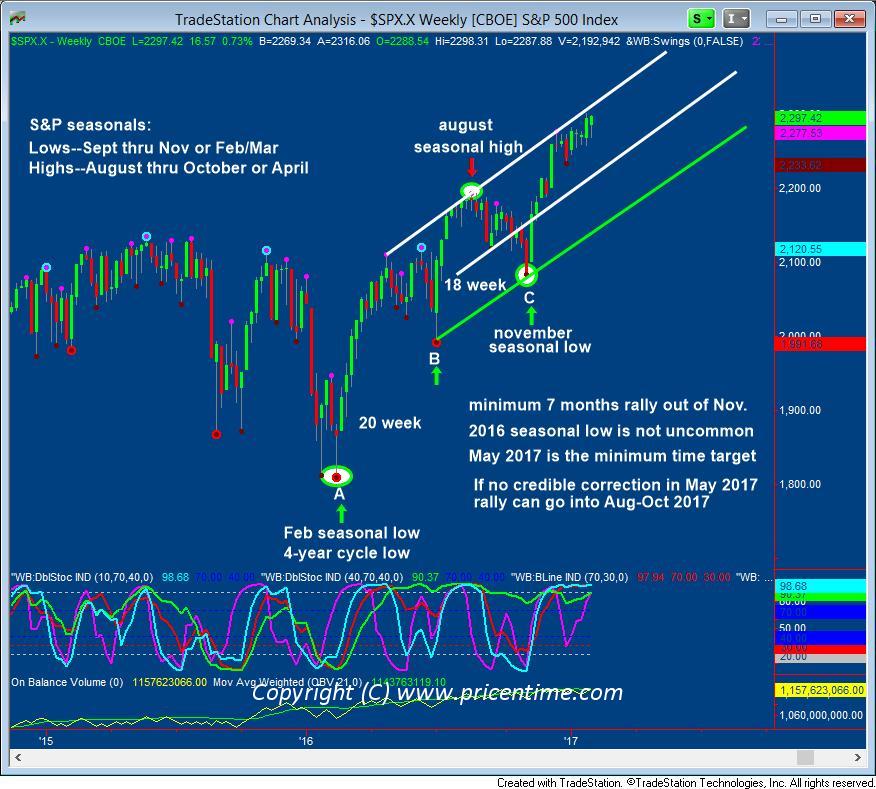 seasonal cycle SP 500
This entry was posted on Sunday, February 5th, 2017 at 3:38 pm and is filed under Forecasts, Stock Indices. You can follow any responses to this entry through the RSS 2.0 feed. Both comments and pings are currently closed.