Today the market blew the gasket that had held down the Value Line Geometric Index for 17 years.  The 17-year old triple top is essentially busted today.  What does this mean?  Are we returning to the crazy boom time like the 90’s from here?  Value line Geometric Index is reflective of the US domestic economy and may well be an indicator of the broad market advancement.

The sentiment is bearish, as the majority remain bearish and most big funds remain under invested in equities. But the market doesn’t even care about the seemingly very unstable President.  Eventually, we will be looking at an amazing amount of money sitting on the sidelines to join the market.  The bull market run from 1921 to 1929 was 97 months. April 2017 will be 97 months for the current bull market run.  If April 2017 doesn’t form a major high, it would indicate a cycle inversion at a grand level, which means the bull market run will continue beyond 2018.  Perhaps the value line geometric index is a better indicator than the Dow Industrial Average for the current market conditions. 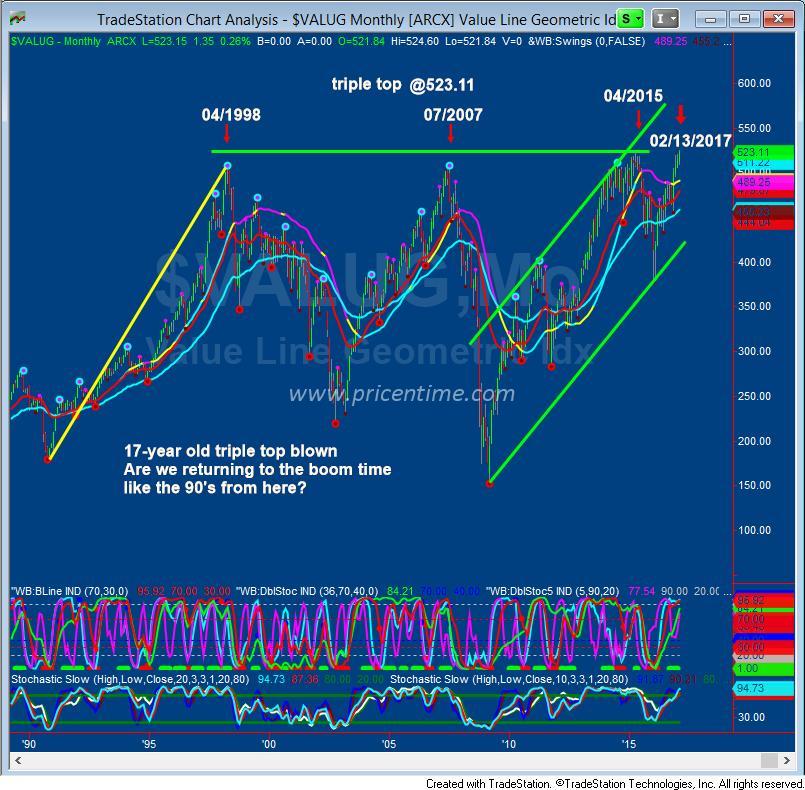 17-year breakout value line geometric index
This entry was posted on Monday, February 13th, 2017 at 7:41 pm and is filed under Forecasts, Stock Indices. You can follow any responses to this entry through the RSS 2.0 feed. Both comments and pings are currently closed.