The S&P 500 cash index continues to press higher despite the negative news coverage about the new white house administration.  The value line geometric index broke out a 17-year old triple top on February 13, 2017.  The value line geometric index doesn’t get the headlines like the Dow Jones Industrial average, but it is the true representation of the real US economy.  It is 15 weeks into the current weekly cycle since the cycle low was made on November 4, 2016.  Back in November 2012 after Obama won the election, the market rallied 21 weeks to finish an invisible cycle (very up trending cycle).  After the long cycle, it rallied five more weeks to create a seasonal high in May 2013.  This is a very similar rally in terms of seasonality and fundamental reasons.  This time the fundamental reasons are even stronger than 2012 because of the value line geometric index breaking out a 17-year triple top.

We recommend our readers to stay long at least until May 2017.

The rally since March 2009 has been the most doubted and unloved rally.  Plenty of shorts have been burned badly betting against this rally.  When you think a market should go down, and it doesn’t, it is time to agree with the market.  Don’t fight the tape. 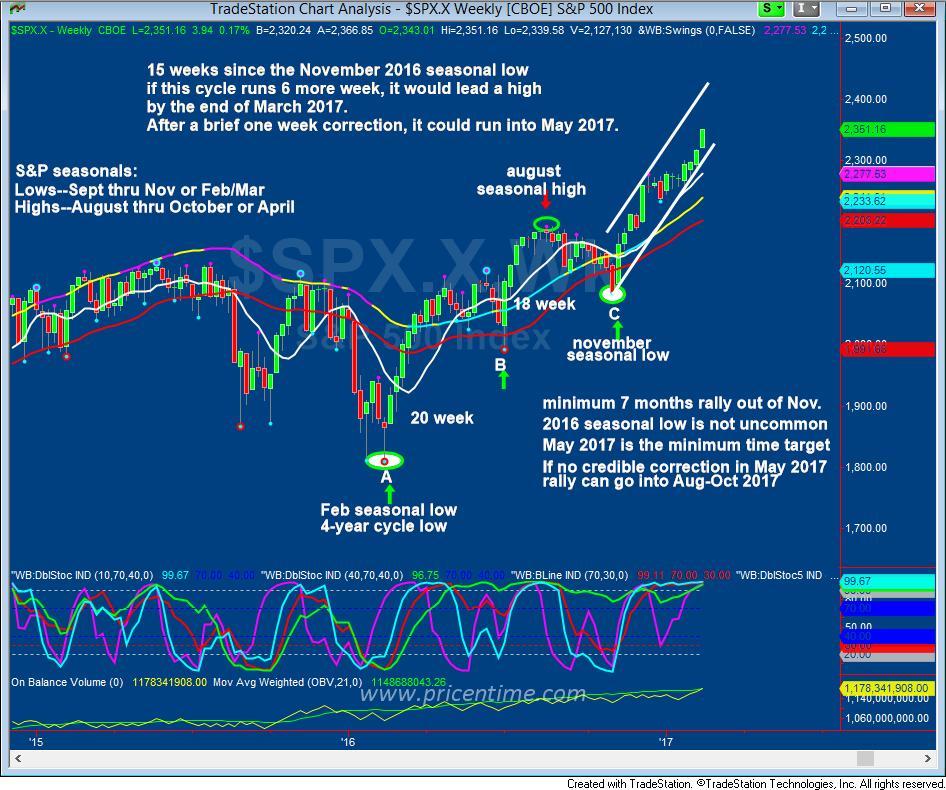 seasoal cycle SP 500
This entry was posted on Sunday, February 19th, 2017 at 10:08 pm and is filed under Forecasts, Stock Indices. You can follow any responses to this entry through the RSS 2.0 feed. Both comments and pings are currently closed.