AMD shorts seized the opportunity and kicked off a selloff two days before the official Ryzen 7 high end chip launch!  Ryzen 7 high end chip had great reviews  but also had bad reviews in gaming performance.  In the face of abundant confusion, we at PricenTime.com carefully examined the fundamental and technical aspects of AMD long position.  We are more convinced about AMD’s long term growth prospects.

The main complaint about Ryzen 7 performance is in gaming performance against Intel chips.  AMD has publicly stated that the issues with gaming are more software related than hardware.  The gaming industry has been developing software around Intel chips which only uses 4 cores for the last ten years.  Ryzen 7 is a brand new architecture which provides 8 cores.  The current gaming software doesn’t know how to take advantage of the new 8-core architecture yet.  Given time, Ryzen 7 will have better performance when the gaming software developers are up to speed.  We believe the market is using this opportunity to correct the overbought condition.  It is healthy to have a correction before advance resumes.

AMD has Ryzen server chips, Ryzen 5 & 3 release planned in the 2nd quarter.  At the same time AMD will also release GPU chips against Nvidia chips.  We believe this time AMD is for real a new company that is taking a fight with Intel and Nvidia at the same time.  Will AMD ever be the same player as Intel or Nvidia?  We don’t know. We do know AMD will take market shares away from Intel and Nvidia.  The Intel and Nvidia’s monopoly days are over.

Technically, this correction is a total sum correction of the advancement from 1.75 to 15.55.  This correction might be lasting from here all the way to the Q1 earnings release, which probably will be around early May 2017.  We will be watching a few technical price levels.  50-day MA is around 12.  And 23.6% retracement is also at 12.26.  This is a confluence price level that we will be watching carefully.  At extreme it could also possibly go to 10.22 that is 38.2% retracement of the total 14-month advancement. 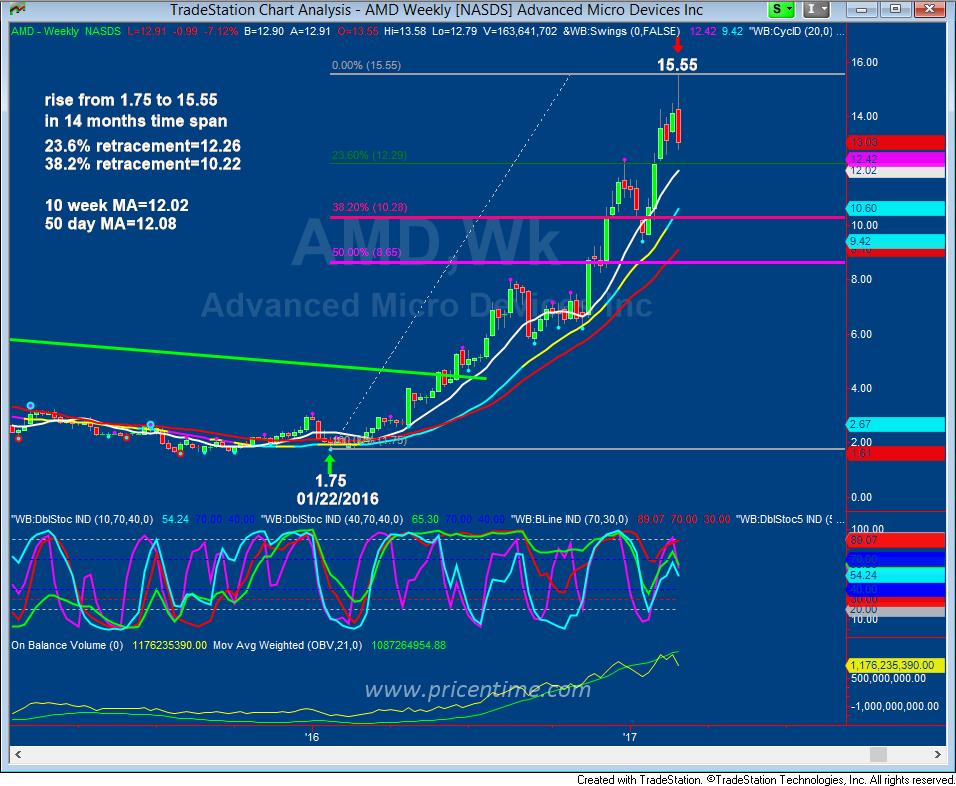 amd
This entry was posted on Sunday, March 5th, 2017 at 9:35 pm and is filed under Hot Stocks, Trade Recommendation. You can follow any responses to this entry through the RSS 2.0 feed. Both comments and pings are currently closed.