We are finished with the slow and painful sideways correction!  A new weekly cycle has started since April 17, 2017.  Where is this new cycle going to lead us to?  Before we forecast the new cycle, let’s examine what has happened.  The cycle does what it always does, it pays no attention to the noises.  The hidden cycle is always there for us to find the clues.

The weekly cycle started on 11/04/2016.  It took 23 weeks to go through low to low.  The low to high process took 17 weeks.  The high to low process took additional 6 weeks.  The price low was made 3/27/2017 while the cycle low was finally made on 4/13/2017.  The 6 weeks correction only produced 23% retracement of the weekly cycle gain.  The correction on the S&P 500 index was very shallow.  The Nasdaq index correction was even shallower.  The general market has a very strong bullish undercurrent, which is reflected through the very shallow corrections on all three major indices.  But the individual sectors and stocks have gone through much deeper correction.  For example, Bank of America stock corrected 14%.  It went from 25.80 to 22.16 during the correction phase.

We are now 7 days into the first daily cycle of the brand new weekly cycle.  If this weekly cycle were to produce a seasonal high which could start a much longer correction process, we have to give this new weekly cycle at least 5-7 weeks time to develop.  So at this time, we can safely say that the bullish trend will last another 3-5 weeks, which will lead us to later part of May 2017.  The overhead resistance is 2480-2500.  If this resistance clears, the next resistance is 2570.

The market gain and lost leaders are consistent with the early bull market characteristics.  We are only 14 months into the bull market, which can last as long as 56 months.  Stay tuned! 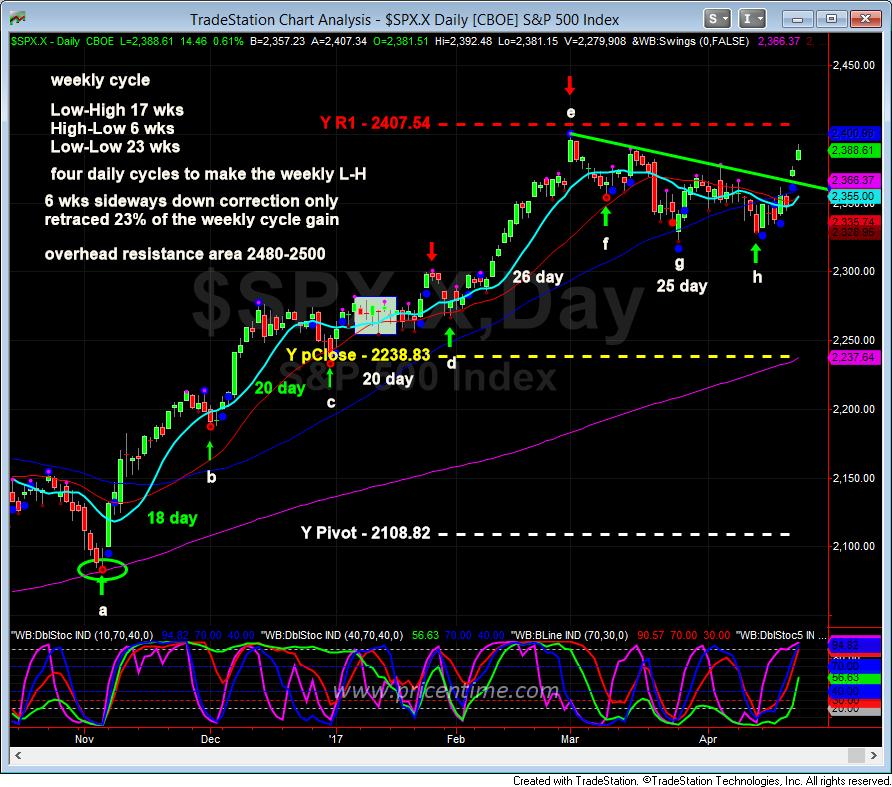 seasonal cycle SP 500 weekly cycle
This entry was posted on Tuesday, April 25th, 2017 at 9:02 pm and is filed under Forecasts, Stock Indices. You can follow any responses to this entry through the RSS 2.0 feed. Both comments and pings are currently closed.