The indices had a selloff today.  Nasdaq was the weakest among all three major indices.  The only sector winning was XLF, the banking & financials sector.  The selloff was not as severe to start to initiate short positions as the markets have been so strong that the shorts have lost a lot of money.  But a correction has been long over due and the seasonal factors might kick in to give us a soft and boring summer.

The S&P is in the 11th week of the 4th weekly cycle since the 4-year cycle bottom in February 2016.  We had previously projected the S&P 500 to reach 2478.  2478 is a very important target that is the confluence of multiple long term and short term swing projections.   Last week it reach 2453, that was about the 70.7% of the journey from 2400 to 2478.  It is very cruel for the market to breakout 2450 by 3 points, then fail to advance to trap the bulls.  2450 was an important psychological level for many market participants.  Again, the market is perverse and it doesn’t have to do anything at any given time.

If indeed 2453 is the top for the currently weekly cycle, we shall see the market to be sideways to down for the summer.  The Nasdaq definitely will be in a weaker position.  Money has already been flowing out of tech to biotech, healthcare and finance.  At the current time, we suggest our readers to take profits in the tech sector and trade lightly in XLF and XLV sectors. 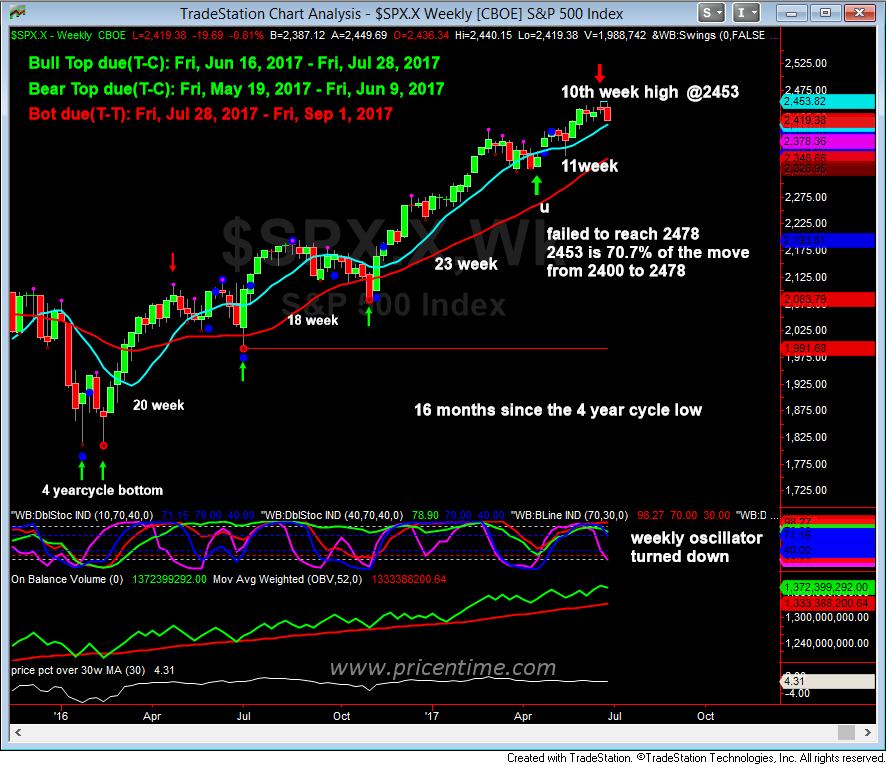 weekly cycle weekly cycle bottom
This entry was posted on Wednesday, June 28th, 2017 at 12:08 am and is filed under Forecasts, Stock Indices. You can follow any responses to this entry through the RSS 2.0 feed. Both comments and pings are currently closed.