Third time is the charm.  The market flashed outside reversal days three time, once on June 9th, once on July 27th, and finally on August 8th.  On those outside reversal days, the market made a fresh new high, then promptly sold off to close below the previous day’s low.  Outside reversal day by definition is about panic and change of momentum.  In the two previous times, the market didn’t have follow thru.  The next day it continued, business as usual.  But on the third occasion, business was not as usual.  It lost 52 points, about 2% from the high in two days.

It is the 17th week in the weekly cycle that started on April 13th.  It is definitely in the top timing band so a selloff from here is a normal cyclical behavior.  Today it violated 50-day moving average, so the next target is a prior swing low at 2405, after 2405, it’s 2382, the 150-day moving average.

It’s about 5% correction to get from 2490 to 2382.  This is a very normal and healthy correction for a bull market.  Based on the seasonality patterns, we suspect this high at 2490 would be the high for the year.  It probably will sell into sometime in September.  Then it will try its best to make a double top in October/November time frame.  From the double top, it will sell off until Q1 2018.  This selloff probably will shake off a lot of people, thinking the bull market is over.

For the time being, we see the crowded tech trade is in more danger than any other sector.  Previously, people have thought no price is too high for the FANG stocks, there would never be anything wrong with the FANG stocks.  The index ETF funds were compelled to buy FANG stocks.  Well, the market will do its best to humiliate anyone. There is no such thing as nothing is wrong.  So we suggest our readers to take profits in the tech sector.  Buy puts if you have a large portfolio. 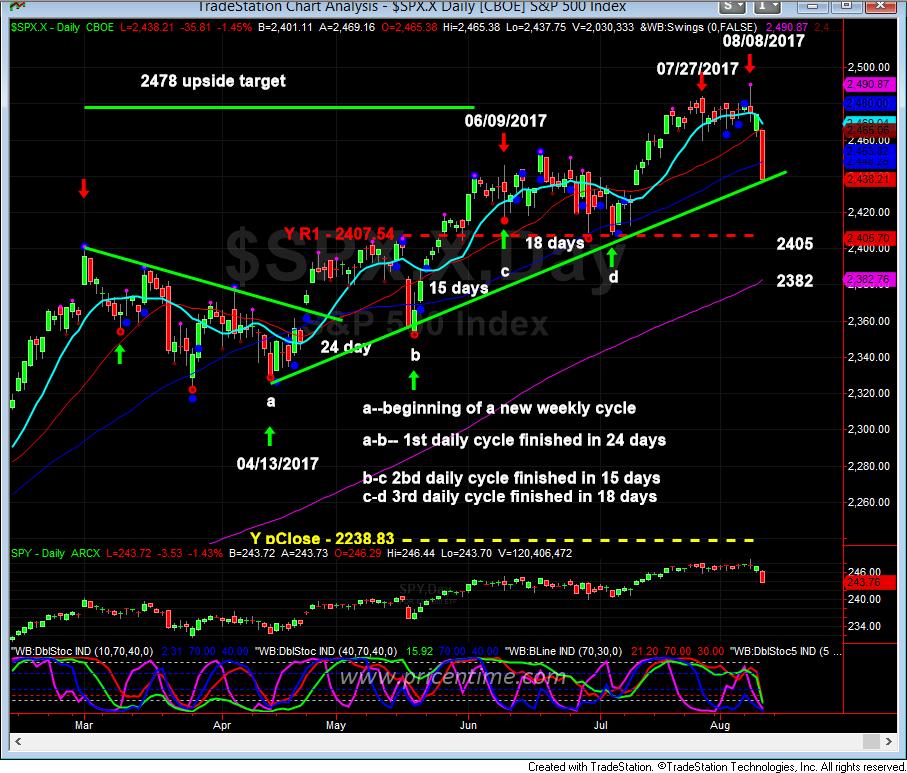 seasonal cycle
This entry was posted on Thursday, August 10th, 2017 at 8:06 pm and is filed under Forecasts, Stock Indices. You can follow any responses to this entry through the RSS 2.0 feed. Both comments and pings are currently closed.