Despite the non-stop geopolitical jittery and the traditionally weak summer seasonality for stocks, the bull market charged ahead and is showing no signs of abating at the moment.  After the brief two-week (8/11/2017-8/25/2017) and less than 3% correction, S&P 500 cash index bottomed on August 21st.  It made a fresh new high in three weeks after the bottom.  It has finished the 4th bar of the weekly cycle,  it is on pace to achieve our upside target @2576 in the next few weeks.

Under the general bullish market, what are the performing sectors?  The most notable facts are:

Is inflation on the horizon with XLE leading the indices?  Is the animal spirit being energized by small cap leading SPY?  It looks to us that the real economy is doing well by having the XLB and XLI outperforming tech.   This is a sign of sector rotation.  The big money is rotating out of tech and moving into the sectors that are sensitive to the real economy.

We suggest our readers lighten up the allocations to big tech and start to enter positions that are reflective of the real economy. 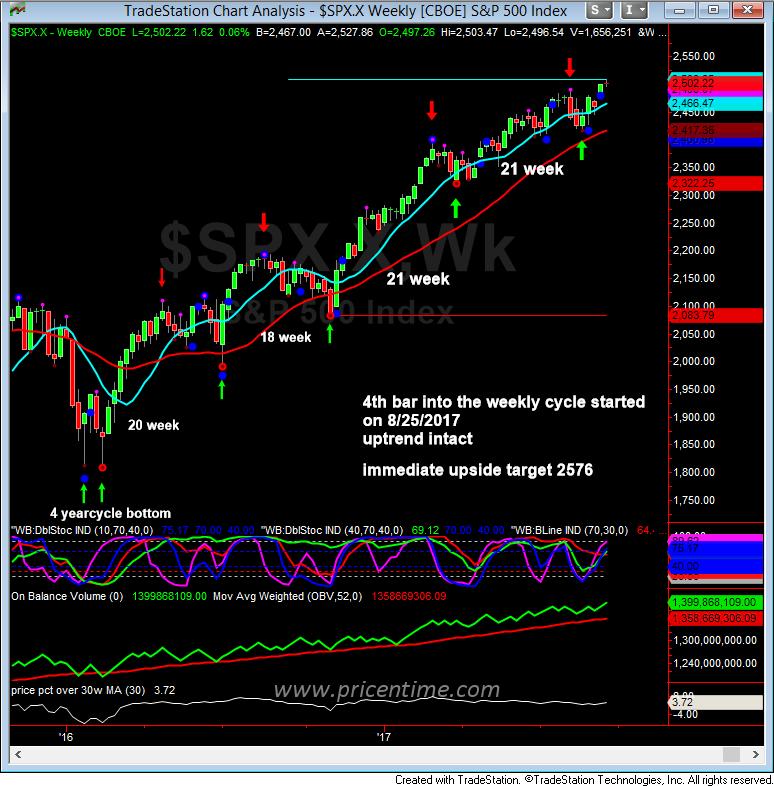 sector rotations
This entry was posted on Saturday, September 23rd, 2017 at 2:05 pm and is filed under Forecasts, Stock Indices. You can follow any responses to this entry through the RSS 2.0 feed. Both comments and pings are currently closed.