The Market Has Gone Up in a Straight Line

We can’t predict future with 100% certainty.  But we can use our past experience as a source to gauge our future expectations.

All in all considered, nothing is normal about today’s market condition.  We are in the mist of the greatest bull market ever, that was a product of the super low interest rates over a decade.  There are very little alternative places to put your money; the stock market is cheap relative to the bond market.  Imagine if you can achieve annual 8% return with your principal guaranteed, how much would you then allocate in stocks? 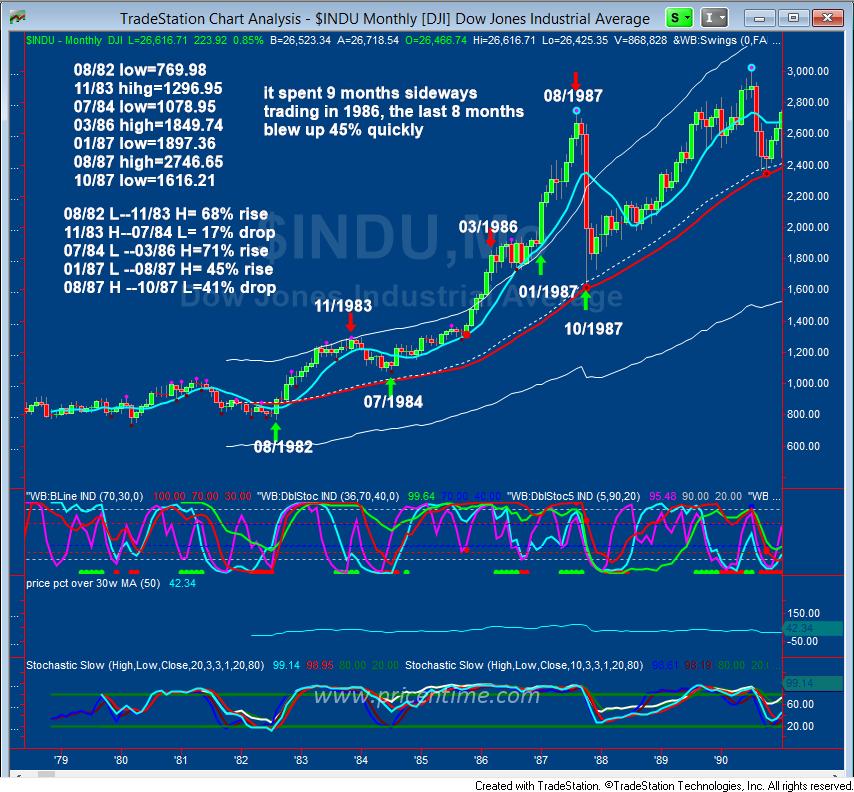 The stock market never topped or bottomed with the same interest rates twice.  The synchronized global growth (worldwide equities rally) is masking the next debt crisis for the time being.

The Bank for International Settlements (BIS) has reported exactly what we have been warning about – the explosion in dollar-denominated debt outside the USA which means a rise in the dollar will see a massive debt crisis. The total volume of US dollar-denominated debt outside the US increased significantly. The BIS reported that the volume of dollar debt of sovereigns and non-financial corporations has risen by 5.2% between September 2016 and September 2017, to around $9 trillion. Euro debt increased even more by 10.5% rising to €2.9 trillion euros. Liabilities denominated in Japanese yen rose 3.3% to ¥48.3 trillion yen.

Dollar will bottom in 2018 and start the rise to 2021.  A strong dollar will break the world’s back.  When the debt crisis outside of the US is full on, the international capital will flow into the US for safe haven.  The capital inflow will be parked in blue chip stocks as the US bonds are not attractive.  The Fed will raise interest rates trying to stop the inflow and the equities bubble.  But the stronger dollar and higher interest rates will attract even more foreign capital, in contrast to the Fed’s wish.

The artificially super low interest rates over a decade are directly responsible for the pending worldwide debt crisis.   Before the debt crisis is reported in the media, the worldwide equities will rally hard.  It will make everybody think nothing is wrong and nothing will ever go wrong.

One of our conservative models is projecting S&P 500 cash index to achieve 3700 by summer 2019. Another is projecting the stock market to top in 2021.

For the time being, we expect the market to rally to April 2018 non-stop.

Rising 30% in the next 18 months is not unimaginable.  In January 1987 alone, it rose 17%.  In the last blow off from Jan – Aug 1987, it rose 45%.  There was never that kind of growth in the economy to justify that kind of rise in the stock market.  That kind of rise was due to the dynamics between the currency and interest rates at the time.

If you read about the G5 Plaza Accord, https://en.wikipedia.org/wiki/Plaza_Accord, you will get some background of the 80’s.  The G5 central bank coordinated intervention caused above normal international capital flow.

This time the Fed’s easy money policy has been exported to the rest of the world.  Debt is like an addiction.  The emerging markets inhaled the easy money like cocaine.  A few thought about the currency risk when borrowing in dollar.  If a developer in China borrowed in dollar, when the dollar goes up 30%, that debt becomes 30% more expensive  to serve since the developer’s earnings is in Chinese Yuan.

The Fed was forced to deploy easy money policy to save the US from the previous financial crisis.  It created an unintended consequence (worldwide debt crisis) as a result of fight crisis.  They think they can manage the economy to avoid boom bust cycle, but the boom bust cycle never failed to appear from time to time.

SP 500 weekly cycle
This entry was posted on Sunday, January 28th, 2018 at 8:44 pm and is filed under Forecasts, Stock Indices. You can follow any responses to this entry through the RSS 2.0 feed. Both comments and pings are currently closed.