The major indices finished the first half of 2018 as a mixed bag.  S&P 500 and NASDAQ both finished with gains, while DOW finished in loss in the first half year.  This truly reflects the worries of a trade war because the DOW is mostly comprised of the multinationals, which are more sensitive to trade issues.

As we have blogged numerous times before, we expected the first half of 2018 to be choppy despite a great earnings season.  We also blogged that the choppiness will not complete until the end of summer.  The economy was in a fine shape until our President declared trade war against the entire world.  Does the President intend to engage in a prolonged trade war to cause a global recession, or is he trying his  hardball negotiation skills on the world stage?  He might be stubborn enough to continue the trade war to the nth degree, just to win the war.  But, he is facing re-election in 2020.  If the economy is in full blown recession in 2019/2020 election season, the chance of him getting re-elected is slim.   So for this reason alone, we suspect he will tone down or back down from the hard line position by the end of the summer.  That way, it will allow the market enough time to create a rosy picture by the mid-term election.  So for the reasons we know, we are reasonably sure that the possibility of having a recession is less than having a rally and great closing at the year end.

Technically, the current weekly cycle has finished 12 bars and clearly it produced a weekly high on the 10th bar when it met 2800 resistance.  The oscillators are all turning down, meaning the market is really weak, therefore the likelihood of having a higher high than the first weekly high is slim.  Next week is a holiday week and the trading volume is light.  It might have a small rally against the 2750 level in the next few days, if you have some profitable positions, that will be your opportunity to get out and wait for your next entry at the end of the summer. 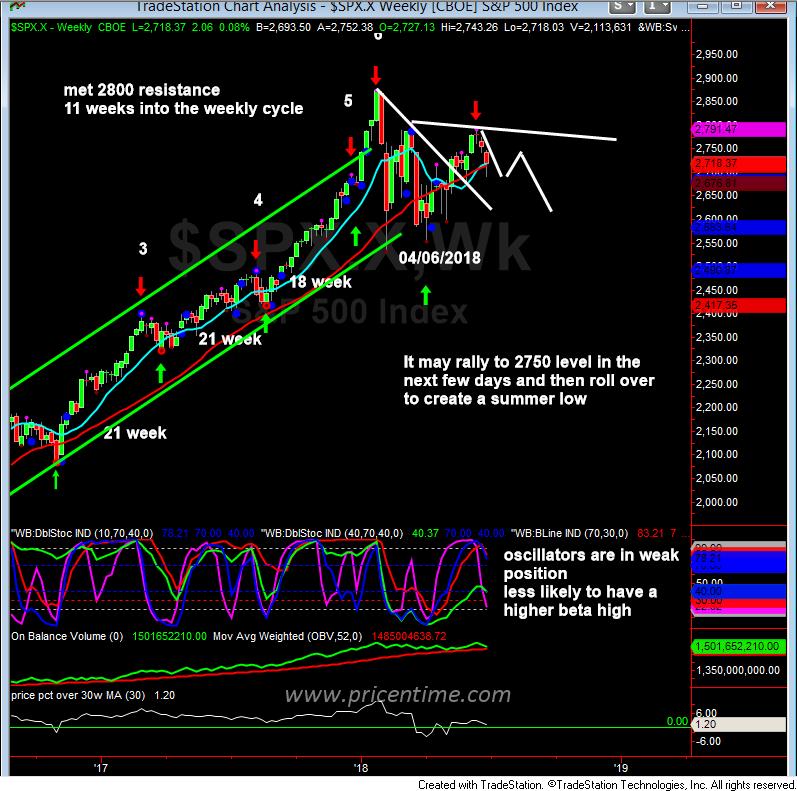 seasoal cycle SP 500 weekly cycle
This entry was posted on Sunday, July 1st, 2018 at 8:18 pm and is filed under Forecasts, Stock Indices. You can follow any responses to this entry through the RSS 2.0 feed. Both comments and pings are currently closed.