Well, finally the S&P 500 cash index broke out the 2800 level last week.  But it has been standing still around the 2800 level without attracting urgent sellers or buyers.  Normally the stalemate will be resolved on the downside by its own gravity–for lack of buyers to push up the market.

The small cap index has been considered safe in the threat of a real or imagined trade war.  The investors have been willing to pay an absurd and ridiculous price for it.  It has been rallying for the last five months straight.  We believe the trade war will dissipate by September/October as the mid-term election nears.  The political forces at work will simply not allow the trade war to hurt their election.  When the time comes, the market will undergo a massive rotation.  Money will flow out from the small caps and into mega caps again.  So it you have holdings in small caps, it is prudent to take profit before the rotation in September/October time frame.  It is not sustainable to have the small cap as the market leader.  Small cap is not blue chip, it is of speculative nature.

The DOW is in the 15th weekly bar in this current weekly cycle.  It will probably stay up till the end of July and then starts a slow selloff again to make a weekly cycle low around the September/October time frame.  The fundamentals are sound and the money is still there for the market to run.  The yield curve is flattening, but has not inverted yet.  Even when the yield curve inverts, the market can still rise about 21% over 18.5 months from the date of inversion.   So for us the primary fundamental indicator is the yield curve and it is still positive for the market.

Based on our studies on the presidential cycle, the third year of the first term is the best year for the stock market.  The administration will do whatever to make the voters feel good about the economy for the sole purpose of re-election.  2019 will be a great year followed by a good year 2020 as well.  So if you have long term holdings, please don’t be affected by the constant noises.  The longest bull market is far from over. 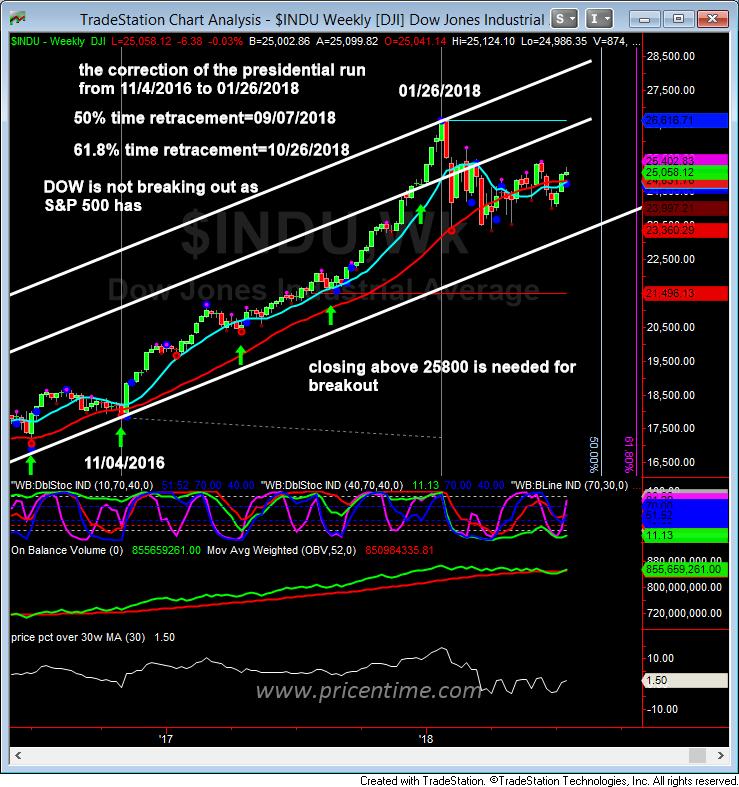 sector rotations SP 500 weekly cycle
This entry was posted on Sunday, July 22nd, 2018 at 8:42 pm and is filed under Forecasts, Stock Indices. You can follow any responses to this entry through the RSS 2.0 feed. Both comments and pings are currently closed.