The DOW and S&P 500 both closed at all time high last Friday, yet the NASDAQ is lagging behind.  At the end of August, NASDAQ was in overbought condition with 8.81% over 30-week moving average.  The current three weeks correction has been supported by the 10-week moving average.

Will this NASDAQ correction lead the market to a new down turn?  We have looked high and low trying to find negative divergence in the DOW and S&P 500 indices.  We couldn’t find any weakening momentum anywhere at the present time, although there are some areas of concerns.  The banking and the semi-conductor sectors both are not performing.   Thor Industries is a leader in manufacturing of recreational vehicles.  Thor is very sensitive to the state of economy.  When the economy is doing well, people spend money to buy those recreational vehicles.  Thor has entered bear market since March 2018 and continues to move down.  The indices are telling us that the market has entered the 2nd phase of the 4-year cycle, but some of the important sectors underneath the indices are not following the cycle direction.  Are we approaching the end of the 2nd phase of the 4-year cycle?  It’s too soon to tell, but we need to be concerned with those warning signs.

Presently, the DOW is 7.22% over 30-week MA.  It is entering overbought territory and is also pressing against the established channel line.  It is 12 weeks ( top timing band) into the weekly cycle that started in the week of 06/29/2018.  It would not be a surprise that the DOW and S&P 500 start to follow the NASDAQ to enter a sideways correction during the last week of September.

Volatility will increase starting in October as we approach the mid-term elections.  At the present time, we still remain the bullish outlook as we have had since February 2016.  Any scary headline caused selloff is still a good buying opportunity. 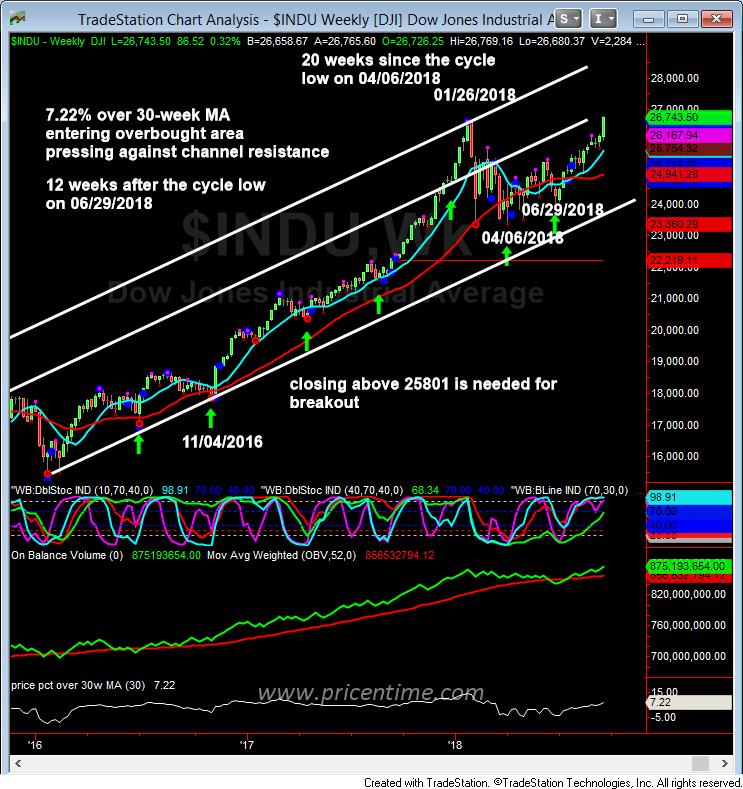 SP 500 Two-Year Cycle
This entry was posted on Sunday, September 23rd, 2018 at 11:40 pm and is filed under Forecasts, Stock Indices. You can follow any responses to this entry through the RSS 2.0 feed. Both comments and pings are currently closed.