Year End Rally Or No Rally

The stock market has suffered major technical damages across the board last week.  Historically midterm election years Octobers are downright stellar. These Octobers have been a time of turnaround, with 12 post World War II bear markets ending in October, including the most recent, 1987, 1998, 2001, 2002 and 2011.  Is the 2018 midterm election October an exception or will it follow the statistic to endow us a year end rally?

We are going to look at the last two 4-year cycles since 2009 to compare with the current 4-year cycle to find out where we are.  Through the cyclical lenses, we can filter out the emotional noises and make a sound decision without regret.  It is our belief that the semi-conductor sector is the bellwether of the broad economy, and it is also a leading indicator for the general stock market.  Applied Materials (AMAT) is in the semiconductor equipment & materials sector that supplies every other semi-conductor company.  Therefore we believe AMAT is the leading indicator in the leading semi-conductor sector.  We compiled a data sheet showing how each and every time AMAT topped and bottomed before the general market. 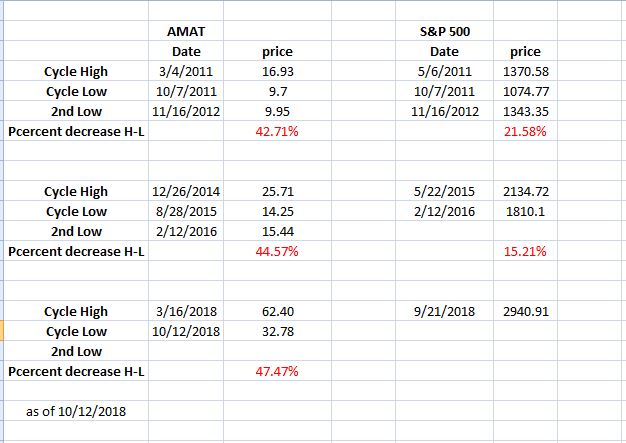 Another weight of evidence is the divergence from the emerging markets.  Since June 2018, the US stock market has been rallying at the backdrop of crushing bear attacks on the rest of the world markets.  Historically the divergence can only last about five months.  This October selloff finally brought it on the same page with the rest of the world.

Technically, the DOW is only in the first bar of the high-low weekly cycle timing band and it has already violated the 30-week MA even though closed above it.  Nasdaq and small caps are firmly closed under 30-week MA while S&P 500 closed barely at the 200-day MA on Friday.

Based on the above mentioned aspects of the market conditions, we are going to err on the side of caution to say that this correction has the potential to be like the previous cycles to reach 10-15% correction off the all time high.  But reaching the eventual 4-year cycle low in price and time will take a few twists and turns.

The market closed at a very weak position last Friday, further selloff is expected in the next few weeks.

As the market approaching the end of the current weekly cycle low in the next few weeks, it will probably have a rally around the early November time frame to attempt the October high again.  This might be the year end rally everyone is looking for. We are going to watch it very closely. It’s too soon to say one way or the other.  It all depends on how deep the current correction will go.

We view this correction as a cyclical behavior and not a devastation like the 2008 meltdown.  The market is supported by the following factors:

We are going to observe the markets closely and if we find anything that contradicts our analysis, we will change our opinion and will let you know immediately.

seasonal cycle SP 500 weekly cycle
This entry was posted on Sunday, October 14th, 2018 at 6:41 pm and is filed under Forecasts, Stock Indices. You can follow any responses to this entry through the RSS 2.0 feed. Both comments and pings are currently closed.