The DOW had an inside day on last Friday and it was also an inside week.  But the DOW was able to close firmly above the 30-week MA while all the other indices closed below it.  The market is appearing to be temporarily stabilizing by having an inside week.

It has been 16 weeks since the weekly cycle low that occurred in the week of 06/29/2018.  The midterm elections are only two weeks away.  During these two weeks, the market will be very choppy and directionless.  The first low occurred in the week of 10/12/2018 will probably the price low, meaning the market will bounce around this price level while waiting to finish the cycle in time.  Potentially the market can turn around immediately before or after the midterm elections.  Historically the market rallies regardless which side wins the midterm.  If the Republicans win the House and Senate, the rally will be bigger and longer.

From our last week’s blog, we have cautiously determined that the market is in a similar position like summer 2015.  The market will go through a 4-year cycle high to low correction phase.  As long as the October 2018 high is not violated, it will remain in the correction phase.  During the correction phase, the market can still produce impressive rallies.  So if indeed it has a year end rally from this weekly cycle low, it doesn’t change anything, it’s a bear market rally.  We should use these rallies to raise cash.  Stay in cash until the next 4-year cycle starts again.

The largest correction since the March 2009 low has been 9 months (May 2015-Feb. 2016) and 15.2%.  If the Bull market has topped, we should expect a decline greater in degree or time and price than any of the corrections within the Bull trend. The point to know if and when we will have a larger correction than the previous one is to see how the market behaves around the April 2018 low.  If it violates the April low but quickly bounces off, then we know the bull market structure is sound.  If it violated the April low with velocity and stays below it for a week, then we are in real trouble.  The market can potentially retrace 38-50% from the March 2009 low to October 2018 high, which could put DOW under 20,000.

It’s too soon to say the October 2018 high is the final high for this bull market.  Stay tuned and be calm. 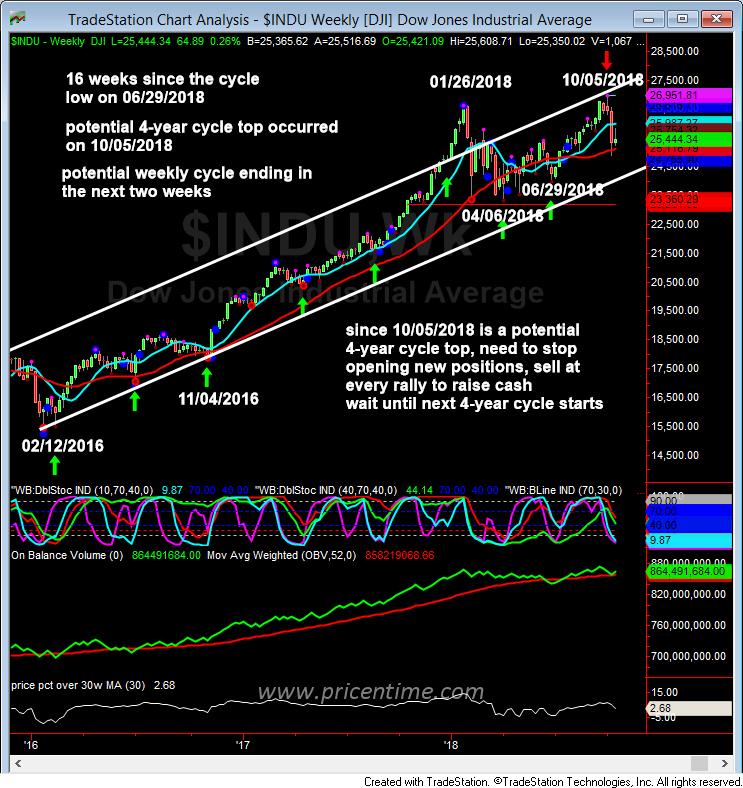 Two-Year Cycle weekly cycle
This entry was posted on Sunday, October 21st, 2018 at 7:15 pm and is filed under Forecasts, Stock Indices. You can follow any responses to this entry through the RSS 2.0 feed. Both comments and pings are currently closed.