The sentiment is relentlessly bearish, the negative news and bearish forecasts are overflowing everywhere.  It feels no end is in sight.  Yes, the end is not near yet, but please keep it in perspective.  When this is all done and over with, you will be presented excellent opportunities that you wish you had in the last cycle.

It’s been 12 weeks since the September S&P 500 index top, the index declined from 2940.91 to 2583.23, a 12.16% decline from high to low.  This decline has outdone the selloff from the January top, which was only 11.84% decline.  It is very oversold short term.  On December 19th, the FED will make an interest rate decision and a forecast of future policies.  A dovish FED statement could ignite a relief rally, which is much needed for the funds to do year end window dressing.  All 3 indexes are now -6% for December, the worst start to the supposedly ‘best month’ of the year (70% of the time it moves higher, therefore the ‘best’).  2018 proves to be a challenging year.

During the market corrections, it is wise to observe companies that produce good earnings despite weaker economical conditions.  Market leaders normally correct 1.5-2.5 times of the general market averages. The growth stocks that decline the least (percentage wise) are usually your best selections.  Those that drop the most are normally the weakest.

Clearly the FANG leadership has been broken.  Facebook is destroyed in this cycle.  We have doubts that Facebook would ever come back as powerful as before.  We think Amazon has the best potential to come back as a leader again in the next cycle.  Amazon was so extended that it could decline 50% when this is all done and over with.  Amazon’s 200 week moving average is 960 right now, it would be a great bargain to be able buy Amazon at such discount.  So this is the opportunity that we are looking forward to. 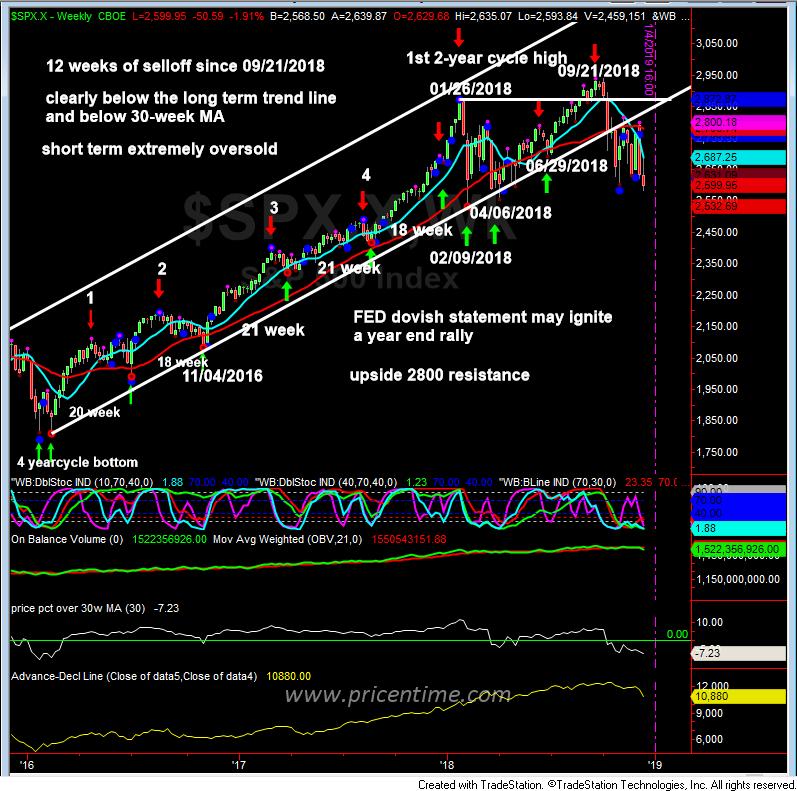 SP 500 Two-Year Cycle weekly cycle
This entry was posted on Sunday, December 16th, 2018 at 7:05 pm and is filed under Forecasts, Stock Indices. You can follow any responses to this entry through the RSS 2.0 feed. Both comments and pings are currently closed.