The market staged an impressive 10.71% rally in the last 10 trading days.  It took 65 trading days to decline 20.21% from the September top to the December low.  The S&P 500 December price low was right at the 200-week moving average, meaning the price was at the maximum pain level for the long term bulls.

Before we answer the question, let’s take a deeper look of the sectors performance during the 4-year cycle that started in February 2016.

XLF (Financials) topped in February 2018, SMH (Semi-conductor) topped in March 2018.  These two sectors are most sensitive to the economy, which have been telling the market that the economy was slowing down.  The tax cut effect has been priced in already.  The general market which were led by the few big caps such as  Apple, Amazon and Microsoft made a second high in October 2018.  This index was masking the underneath problems of a weaker economy and therefore weaker earnings.  The December price low is 50% retracement of the 4-year cycle low to high, in another word, the market has given up half of the gains it achieved during the 4-year cycle low to high phase.  Is that enough correction and sentiment change to make the December low the 4-year cycle low?

Yes, in our opinion the December low may indeed be the 4-year cycle low because we believe we are in a 17-year secular bull market.  We are a little surprised how fast the market achieved the price low.  So the answer is that we believe the recession is not in our forecast.  The 200-week moving average is the ultimate support for the market.  But the 200-day moving average is in a down slope, which means in order for the market to be truly out of woods, it has to overcome the 200-day moving average.  It may take a few quarter to accomplish that.  That’s why we think we may have a price low, but not a time low yet.

In short term, the market is meeting a strong resistance zone.  2600 level is highly watched.  From the breadth of the past ten trading days, it may surprise everyone and rally to 2630-50 level before retreat.  It all depends how it reacts to the bad earnings in Q1.  Citibank is reporting earnings before open on Monday.  It will set the tone for the rest of the financials.

Originally we expected the market to re-test the December low in mid February the latest, but from the breadth of the rally, it may not happen.  We have to keep an open mind and listen to the market’s price action.  If it fails to produce a second low in February,  it is a real good news that the chances of the December low being the 4-year cycle low is much higher.  We will be buyers for the March re-test low. 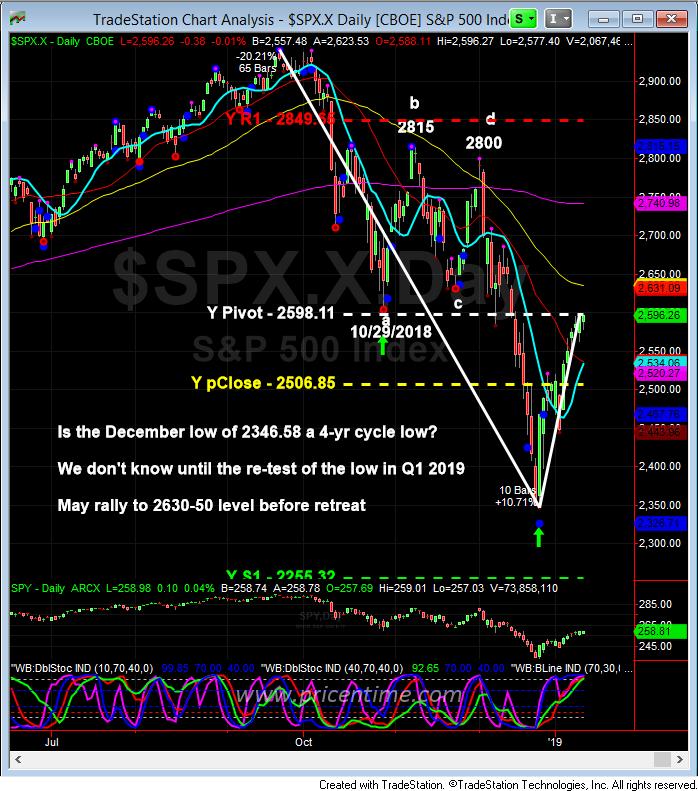 Both semi and financials are leading the market coming out of the December low.  Does it mean the market has made its low and is on its way back up? Maybe, we are watching them closely.

During the raging bull market from 2016 to 2018, IBB and XBI both didn’t participate and failed to exceed the previous 4-year cycle high which was made in 2015.  Is the outstanding performance coming out of the December low a signal for bio tech to be the new leadership in the new cycle?  Maybe, certainly biotech is not affected by the trade war and slow economy.  People are still going to buy medicine even if there is a recession.  So we will watch IBB and XBI closely.

biotech SP 500
This entry was posted on Sunday, January 13th, 2019 at 9:20 pm and is filed under Forecasts. You can follow any responses to this entry through the RSS 2.0 feed. Both comments and pings are currently closed.