Finally the index went points close to the 200-day moving average, but it had a very mild reaction, there is no forceful selling, period.  The mood of the streets is “under invested”, meaning the majority missed the bulk of the rally, either the longs got out too soon, or the bears shorted too soon.

It has rallied over 16% since the weekly cycle low in December.  Because of the strength of the rally, it has changed the nature of the December low.  The December low will later on be proved to be a major low.  Since we have to treat the December low as a major low, the current rally will run at least another 6-8 weeks, if not longer.

The bonds are rallying with the stock market.  The bond market is believing that the economy is slowing and risk is abound, but the stock market is defying the point of view of the bonds, persistently marching up.  The only reasonable explanation is liquidity.  The investors are flush with money, there is no shortage of money that will chase the market even though the slower earnings growth is reported abundantly.

Again, we reaffirm our long term bullish view.  This is a base building phase, the market will kick in gear in the 2nd half of the year. 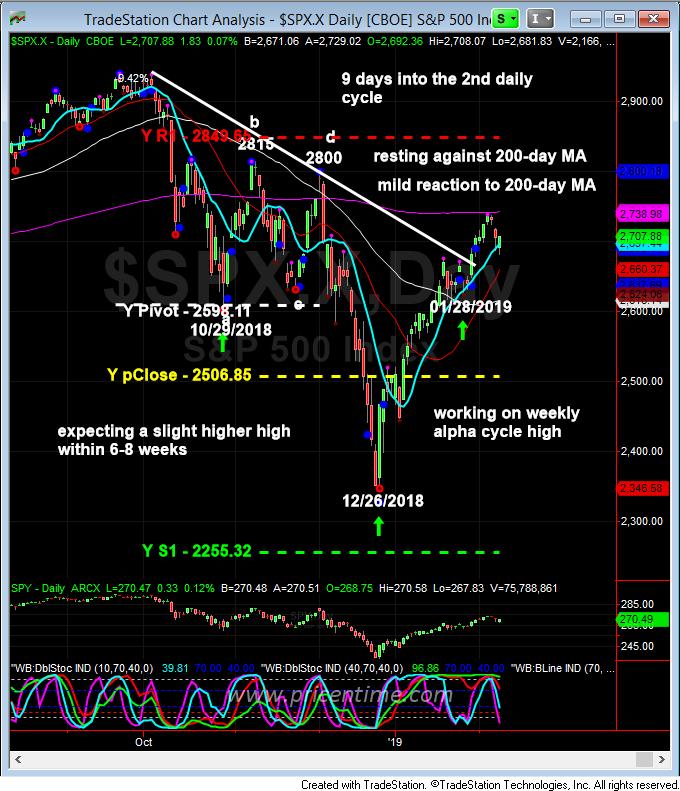 daily cycle SP 500 weekly cycle weekly cycle bottom
This entry was posted on Sunday, February 10th, 2019 at 6:30 pm and is filed under Forecasts, Stock Indices. You can follow any responses to this entry through the RSS 2.0 feed. Both comments and pings are currently closed.