It has been 86 trading days since the December 2018 low.  The S&P 500 index rallied a total of 25.89% from low to high.  The high occurred on Wednesday May 1st after the Fed meeting conference.  After the initial 1.8% drop on Thursday, it rallied back on Friday based on good employment numbers.

Last Friday’s rally sure made it look like the bull market has no end in sight even though it’s extremely overbought.  Everything was so good, what could mess it up?  Unbeknownst to anyone, our Twitter happy President tweeted out that the trade war is back on on Sunday afternoon.  The trade talks were too slow.  The tariffs on $200 billion of Chinese goods will increase to 25% this Friday, with 25% tariffs on additional $325 billion of Chinese goods shortly.  This is very different than what the market has been expecting.  The market was expecting the 10% tariffs on the $200 billion of the Chinese goods to go away, never mind an increase from 10% to 25%!  The entire rally from the December low was based on the sentiment changes surrounding Fed policy pivot and trade war resolution.  We knew it’s about time that the market will turn down based on past patterns, but we couldn’t forecast the fundamental reasons as to why the market will start a correction at a precise time and price, but we knew it will happen and it’s never good to chase the market at high!

Now the questions are:

If it’s 10% correction, the S&P 500 downside target would be around 2650 level, that is also a 50% retracement from high to low.  If it’s going to re-test the December low, making it a double bottom for the 4-year cycle, the correction process will drag it out to the end of the 2019.  The breakdown of the trade war talk will put the stress of the global economy and confidence. Our other model points to the global economic confidence bottoming in January 2020.  Clearly the re-test of the December 2018 low is a possibility.  We will send out alert when that happens.

The semi-conductor sector is highly connected to the global economy/trade war resolution.  We will be watching this sector in addition to our cycle technical analysis tools to nail down the coming bottom.  Again, we are bullish in the long term.  There will a tech bubble that’s going to be bigger than the dotcom bubble.  Fasten your seat belt. 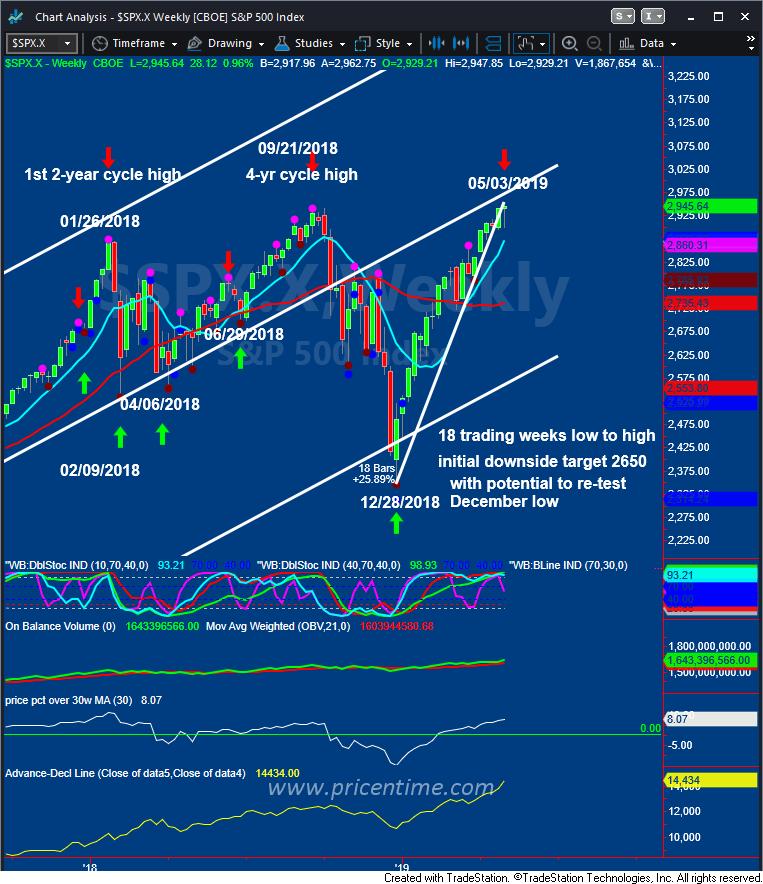 SP 500 weekly cycle weekly cycle bottom
This entry was posted on Sunday, May 5th, 2019 at 5:51 pm and is filed under Forecasts, Stock Indices. You can follow any responses to this entry through the RSS 2.0 feed. Both comments and pings are currently closed.