The Power of Price Reversal Action

With the recent development of blacklisting the Chinese tech giant Huawei, the scope of the trade war has expanded much larger than originally thought.  The semi-conductor sector has been hit really hard as China is the largest buyer of the U.S. made semi-conductor products.  This action against Huawei sure does look like an existential risk for Huawei.

According to the major wall street firms’ estimate, if the trade war is not resolved by the end of June, the US and world economy will slip into recession.  The Trump administration definitely can’t afford a recession into the re-election season.  But Trump has pushed so hard in the trade war with the addition of Huawei in the mix, the Chinese may not come to the table to negotiate.  If both sides can’t even come to the table to negotiate, are we doomed to have a bearish stock market as a direct result of the prolonged trade war?

It’s difficult to forecast the outcome of the trade war.  Probably it’s equally hard for Trump to forecast the outcome as well.  While we are all in the dark concerning the trade war, but we do have the stock market price data to help us understand where the market is at in cycle point of view.  The pure price data provides more clarity than the news/tweets because all (unknown and or known) is reflected in the price.

We have gone back to the March 2009 and February 2016 bottoms to see how the previous two bottoms were reversed.  We know now both bottoms were the beginnings of significant gains in the years ahead. 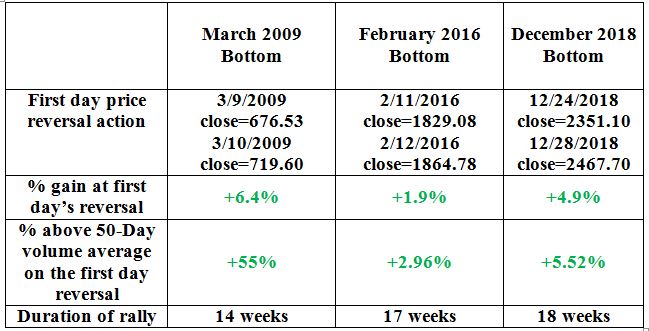 As you can see, the December 2018 bottom was reversed by a one-day gain of 4.9% with 5.52% over 50-day volume average.  This reversal action is comparable to the price action that took place in March 2009 to reverse the bear market which was induced by a financial crisis.  Because of the strength and duration of the December to May rally, the current bull market will have a longer life than just a little over four months.  In other words, despite the very negative fundamental development in the trade war negotiation, the price action is forecasting a bull market ahead.  We need to be patient to allow the third leg selloff to finish before we step in to take long positions.  The first leg was sold to S&P 500 2800 when the news broke out, right now we are in the second leg of a holding pattern.  The third leg will occur when the support of 2800 is violated.

Surprisingly bitcoin entered secular bull market territory by rising above 200-week moving average in April.  Is bitcoin being used as a way to move money across border under the geopolitical stress?  Maybe.  It is a lot easier to move Chinese Yuan out of China by buying bitcoin in China than converting it into US dollars!  Originally we thought bitcoin is solely a speculative asset that is a bubble indicator for the stock market.  Now bitcoin is rising against the backdrop of a stock market correction.

We were not a big fan of Facebook in the past due to the privacy concerns.  Since the Facebook data/privacy scandal broke out, we were surprised to find out that the users didn’t really care about their privacy.  They never left Facebook while being fully informed of the privacy risk.  Facebook will continue to exist as a digital advertising giant.

Facebook’s highly anticipated cryptocurrency is set to launch in the first quarter of 2020. Named ‘Globalcoin’, the cryptocurrency will be a stable coin pegged to a basket of fiat currencies. With plans to launch in a dozen countries by the first quarter of 2020 and spending significant time with officials from both the US Treasury and the Bank of England, Facebook appears to be taking a regulatory-friendly approach.

Facebook also is in talks with money transfer firms including Western Union as it aims to provide more efficient ways for people to transfer and store value without a bank account. Clearly, it intends to compete with Paypal’s Venmo and Square’s CashApp to become one of the world’s digital wallets.

Will Facebook’s adoption of cryptocurrency be the growth driver for the next few years?  Facebook does have a size advantage by having a 2+ billion global user-base.

Facebook is expected to outline details about the launch this summer. We will be watching closely.  We are adding Facebook in our watch list during the market correction phase.

The G20 will take place in late June which is the likely time frame for the current weekly cycle to bottom.  The selloff in the stock market sure will give pressure to Trump to reconsider his trade war cowboy approach!

SP 500 weekly cycle
This entry was posted on Sunday, May 26th, 2019 at 10:07 pm and is filed under Forecasts, Stock Indices. You can follow any responses to this entry through the RSS 2.0 feed. Both comments and pings are currently closed.