What trade war?  Trump and Xi made a truce at the G-20 meeting on Saturday.  It didn’t matter what Trump did, whether it’s real tariffs, Twitter threats of ever increasing tariffs, blacklisting Huawei and five more other tech companies, Trump couldn’t pressure China to make concessions!

China will never change its domestic laws to appease Trump just to make a trade deal.  China can wait it out, Trump can’t.  Under Trump’s trade war tactics, China didn’t make any concessions while demanding “respect”.  Trump made a big concession by throwing Huawei a lifeline just to resume the trade talks.

Trump will not be able to implement the 2nd batch of the tariffs on $300 billion Chinese exports as leverage as it’s getting closer to the re-election season.  The 2nd batch of the tariffs will hurt the US consumers more than China. Trump prefers business deals over cold war because he was able to go against the Washington anti-China hawks by letting Huawei off the hook this time.  In our opinion, there will not be a deal with the enforcement the Trump administration demanded.  Trump’s hands are tied to raise the additional tariffs.  The most likely outcome is that we are stuck with the existing tariffs for a while with no clear path to a permanent deal.

The truce will continue to help the market grind higher until early August when it has to deal with the 2nd quarter earnings recession.  Seasonally we already had a top in May, which is about sell in May and go away tendency.  July to October period is seasonally volatile and has a tendency to make a season low before the holiday season.

Now we are pretty sure the December 2018 low is a 4-year cycle low.  The first year in the 4-year cycle is pretty muddy because the fundamental problems exist while the market is trying hard to rise.  If the market plays out as historical patterns of the first year in a 4-year cycle this year, we will see a September/October low that will be the last chance to get on the bullish train.  The entry area is around the index 200-day moving average, which will be around S&P 500 2800-2850 in September/October seasonal low time frame.  The June low of  2728 should not be violated.

In the last two trading days of June, the small caps made surprising strong rallies two days in a row.  Many small cap stocks are breaking out while the mega caps remain pretty lame.  The smart money are pressing their bets on American domestic companies over the multinationals.  Small caps outperformed the S&P 500 index from Jan 2018 to July 2018 which was the beginning of the intense trade war.  The investors will prefer the small caps with the trade war threats lingering around.  It is a healthy sign to see small caps doing well in the beginning of the 4-year cycle. 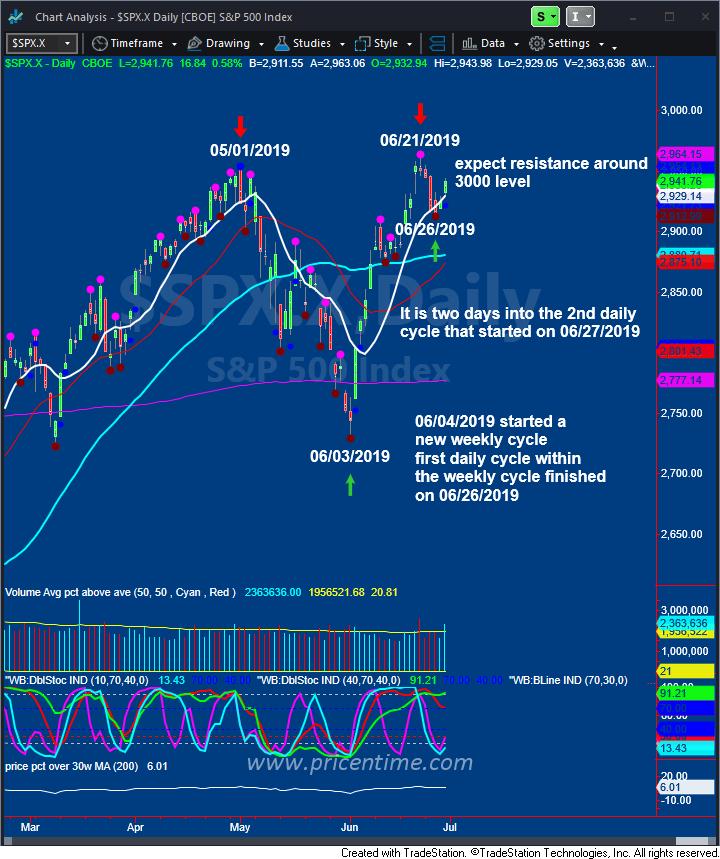 The four stocks are:

STNE– a growth stock in fintech from Brazil.  Warren Buffet is the largest holder of this stock.  It was IPOed in October 2018.  It was out of character for Warren Buffet to own a newly IPO stock in high tech area.  But the growth of this company is amazing.  The chart is very healthy, only about 10% above 150-day moving average.

Again, you can get hurt when you buy a growth stock too far above the 200-day moving average.  80% of the stock market daily trading is controlled by the machines, they will short the growth stocks mercilessly as if they are going to bankrupt.

Member Only SP 500 weekly cycle
This entry was posted on Sunday, June 30th, 2019 at 7:05 pm and is filed under Forecasts, Member Only. You can follow any responses to this entry through the RSS 2.0 feed. Both comments and pings are currently closed.