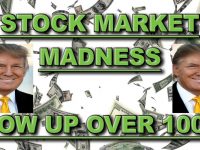 The stock market usually is chaotic and full of madness.  This time with a Twitter happy President, we have had unusual amount of madness that can make anyone dizzy.  The President’s economic policies are totally geared toward manipulating the stock market with the end goal of re-election in 2020.

This is evident with the passage of the Tax Cuts and Jobs Act of 2017 in December 2017.  Normally a fiscal stimulus is not deployed after an extended period of easy money policy, it is reserved for bad economic times to save the day.  The market was anticipating the good news in 2017, therefore it didn’t even have a 5% dip throughout 2017, which is quite unusual.  The equities surge in January 2018 promptly produced a two-year cycle top.  The market was sucker punched between the trade war and rate hike in 2018. Therefore the 2nd half of the four-year cycle was cut short, it couldn’t surpass the first two-year cycle high and only lasted seven months from February to September 2018.  The four-cycle that started in February 2016 ended in December 2018 with a total of 34 months.  The presidential economic policies definitely shaped how the four-year cycle played out.  It produced a rare four-year cycle bottom in December which is totally against seasonal tendencies.