We blogged last week that the market was in a confirmed bullish trend despite the trade war and Fed rate cut noises.  Last week was a holiday week so the trading volume was low.  As of now, the market is still in a confirmed uptrend.  Since the last quarter of 2018, the market has been entirely news driven regardless of the underlining fundamentals, but the cycles have been functioning as they were supposed to.  So it’s best for us to listen to the tape and ignore the noises.

Presently, the S&P 500 cash index has finished 4 weekly bars in the weekly cycle, which is still in the weekly alpha cycle phase.  It has finished the 1st daily cycle and it is 6 days into the 2nd daily cycle within the weekly cycle, which is still in the daily alpha cycle phase.  The time location of the daily and weekly cycles indicate that the market will continue to grind higher.  Immediately it will meet 3000 psychological whole number resistance.  It will probably chop around the whole number for a few days and then it will press higher to attack 3077 level.

If the market can stay above 3077, then it will enter a breakout phase.  With the slow down of pending Q2 earnings release and unresolved trade war, the market may have trouble to break the 3077 from here.  From cycle perspective, we expect the 3077 will be the weekly cycle high sometime in August, then the market will experience a 5-10% selloff which probably will last into September-October seasonal low time frame.

The yield curve has been inverted for the last month. An inverted yield curve occurs when long-term government debt yields fall below rates on short-term notes and bills. For stock market investors, an inverted yield curve is typically a sign that equities could peak before an economic recession will follow. It also can be a precursor to a bear market in stocks, where equities fall 20% or more from highs which is the typical forecast. Some have pointed to the escalating China trade war. Investors, they claim, are worried that the China trade war and U.S. tariffs will slow global economic growth.

Is this time going to be different that the yield curve inversion may not be a recession leading indicator?

We believe this time is different because of the ample liquidity.  The Fed hasn’t made one single interest rate cut, the market easily rallied 25% from the December low based on the Fed’s promise of potential easy policy.  There is no problem with liquidity, investors have plenty of cash on the sideline.  The entire rally since the March 2009 low has been the most hated and worried, yet it has been the most resilient bull market in history.  Investors are still scarred by the 2007-2008 market crash, the memories are still fresh.  The market has been fairly or sometimes over valued but has never been in a bubble territory at all since March 2009.  The corporate buybacks have been the biggest buyers in the market!

With the unprecedented easy money policy over a decade, the bull market will not die off simply because of old age.  It will ONLY die when there are more no buyers.  When will there be no more buyers?  When the buyers have spent all their money to chase the market to new heights, that’s when there won’t be any buyers left in the market.  We are far away from that condition.

So the big picture is still very bullish despite the pending summer volatility.  Good times are ahead of us.  Do not pay attention to the trade war or Fed interest cut noises.  The bull market will press on regardless. 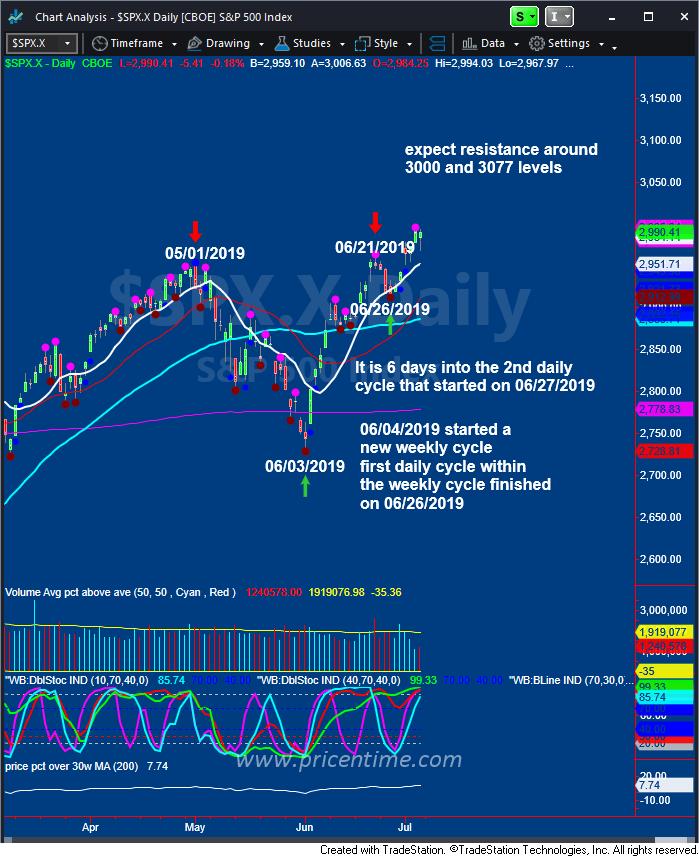 seasonal cycle SP 500
This entry was posted on Sunday, July 7th, 2019 at 8:40 pm and is filed under Forecasts, Stock Indices, Uncategorized. You can follow any responses to this entry through the RSS 2.0 feed. Both comments and pings are currently closed.