Clearly Trump wasn’t happy that the Fed didn’t go far enough by only cutting 25 basis points.  By escalating the trade war Trump just created the reasons for the Fed to cut interest rates further.  Can monetary policy alone save the economy?  Will the low interest rates embolden the White House to engage in a wild and reckless trade war?  The absolute dollar amount in this new round of tariffs is small relative to the GDP, but how is  the global business confidence going to hold up when the global supply chain is facing such uncertainty?

The above two scenarios are entirely possible because the current administration is reckless, to say the least.  It took over 30 years to build today’s global supply chain, a few Tweets have done a lot of damages.  If the 10% tariffs against the $300 billion Chinese imports implement on September 1st as announced, it will increase the likelihood of extending the selloff to Q1 2020.  It’s very possible that the White House changes the trade policy suddenly in order to reverse the market crash since the market rally is of paramount importance to the Trump re-election.

In short term, all three indices closed above 50-day moving average on Friday.  It may have found temporary support at this level.  It may start a relief rally from here. 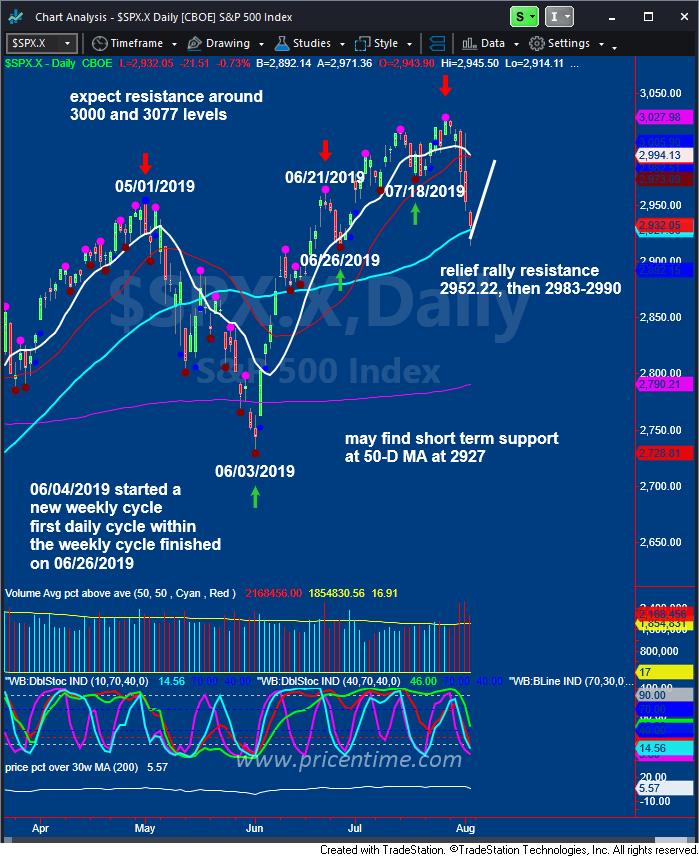 The earnings season is nearing the end, another round of the Fed policy announcement will have to wait until September.  So we are left with a huge vacuum in August to digest the major events of trade war development and Brexit.

2. Take some money off the table, especially if you have over 20% profit in open positions.

The market can only get scarier from here until October or Q1 2020.  But rest assure, better days are ahead of us.  A tech inspired grand bull market is waiting for us.

SP 500 Two-Year Cycle weekly cycle
This entry was posted on Sunday, August 4th, 2019 at 6:14 pm and is filed under Forecasts, Stock Indices. You can follow any responses to this entry through the RSS 2.0 feed. Both comments and pings are currently closed.