Federal Reserve chief Jerome Powell will deliver opening remarks at the Jackson Hole Economic Policy Symposium next Thursday.  The market could have violent reaction to the Fed Chairman’s statements, it doesn’t no matter what he says.  Whatever the Chairman’s statement will be, it will not be enough to reverse the existing trend.  The current trend is bearish with the trade war being the cause of all the uncertainties, at least during this August – September seasonally weak period.

If the White House implements tariffs on September 1st, in other words, if there is no blanket delay of tariffs on September 1st, all bets are off.  There will be no trade deal before the election and the market is heading to re-test the December 2018 low.  The White House is under the assumption that the US economy can sustain the collateral damage from the trade war.  It may be the case, but no one can put a price tag on the damage of business and consumer confidence.  Clearly the White House’s ultimate goal is to re-route the global supply chain and drive American manufacturers out of China.

The protest in Hong Kong has gotten worse by the day.  It’s pretty surprising that the Chinese government hasn’t stepped in with military gear yet.  Eventually there will be an end to the protest, how will the market react to the Hong Kong protest resolution?  We think Hong Kong could be a black swan event for the global market since the global economy is currently under recessionary pressure.

Currently, it is 9 days into the daily cycle that started on 08/05/2019.  It has made a daily cycle alpha low on 08/15/2019, the market could be sideways to up for the next three days while waiting for the Fed to speak on Thursday.  Also the White House came out on Sunday to defend the trade war and try to defuse the recession fear.  This shows that the White House is fully aware the situation which can get out of control since the Chinese government has not shown any signs of cooperation on the trade negotiation.

If you are an investors, please try your best to stay out of the market for the time being. 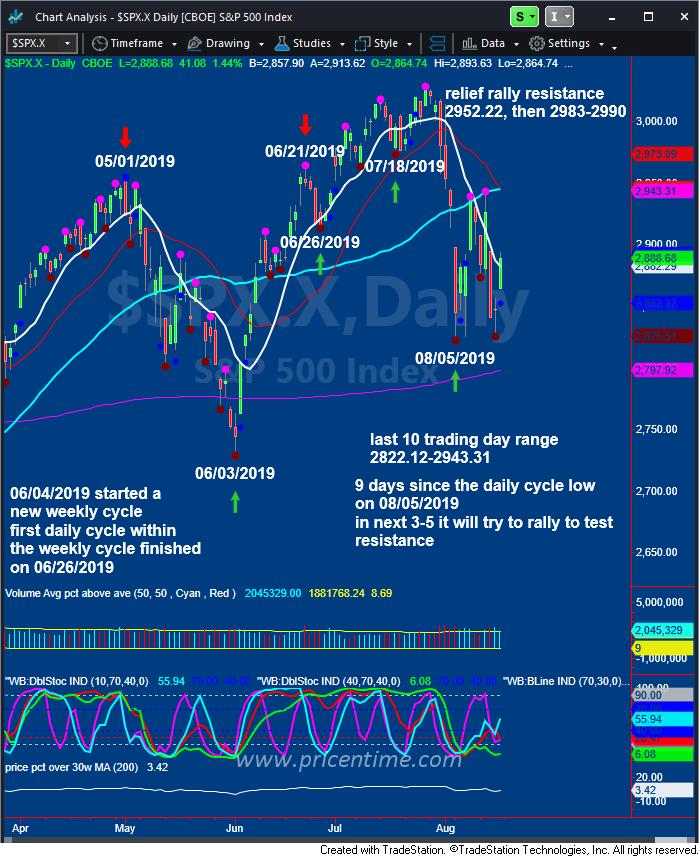 Member Only SP 500 weekly cycle
This entry was posted on Sunday, August 18th, 2019 at 7:10 pm and is filed under Forecasts, Member Only, Stock Indices. You can follow any responses to this entry through the RSS 2.0 feed. Both comments and pings are currently closed.