Even though the S&P 500 is currently only about 60 points below the resistance zone, it seems to be easy for the market to penetrate the resistance zone when the market receives good news on the trade war since the market rallied and crashed randomly in August based on the Presidential tweets.  The Fed rate cuts and trade war are the topics the mainstream investing community has been paying attention to, the business cycle is seldom mentioned.  The real truth is that the global economy was slowing down without the trade war stress.  With the trade war, the global economy is under tremendous recessionary stress.  The US economy is not immune to the global slowdown, it is the last man standing and eventually it will reach the correction low.

This is one of the main reasons that we should be open minded about the correction downside target.  It is actually healthy for the economy to go through recessions to clear out excesses. Recession is part of the natural phenomena.  A market correction can only make the next bull market rally stronger and last longer.

So we believe the second half of 2019 will be murky.  It will not fall out of the bottom, so the bears are stressed out.  It will not rally into the new highs, so the bulls are equally frustrated.

In cycle terms, it is 12 weeks into the current weekly cycle.  Most likely the market has made an alpha weekly cycle bottom, and the final weekly beta cycle bottom is yet to be seen.  We are expecting the S&P 500 to bottom around 2600 or 2485 depending on how the market reacts to the catalysts such as the Hong Kong protest resolution and or Brexit outcome.

While the S&P 500 cash index has corrected a little over 5% from high to low, the market leader Microsoft hardly corrected any.  The growth stock ROKU continues to make new highs on a daily basis since the earnings report.  Another AI software growth stock LPSN also showed tremendous resilience in the face of market correction, it advanced over 30% in the month of August.

These three stocks (MSFT, ROKU and LPSN) demonstrated strength when the general market is showing weakness.  When the market enters real correction later down the road, these strong stocks will go down with the general market for sure.  The inevitable correction will happen to all stocks.

When we see the turn of the market, i.e. when the correction is over, we will open sizable positions with the above mentioned three stocks. 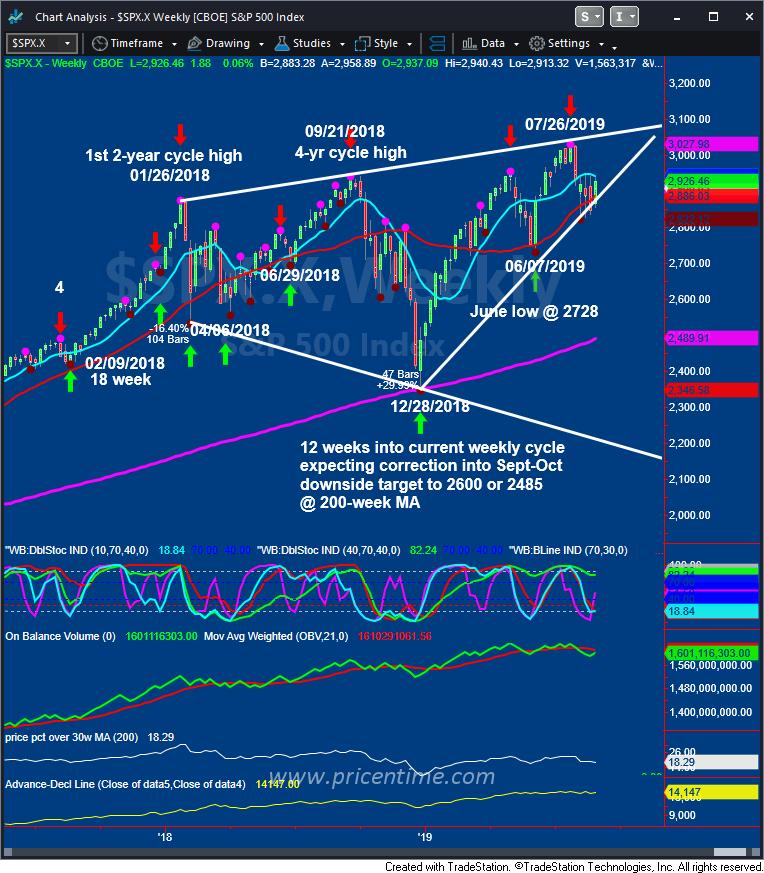 Member Only SP 500 weekly cycle
This entry was posted on Sunday, September 1st, 2019 at 10:49 pm and is filed under Forecasts, Member Only, Stock Indices. You can follow any responses to this entry through the RSS 2.0 feed. Both comments and pings are currently closed.