Since August, we have been bearish expecting the market correction to run its course until sometime in October.  But the market had shown abnormal strength in the first nine trading days in September.  Because of the abnormal price action, we sent out private email notes on September 11th, which outlined the possibility that the correction bottom (early August low) might be in already.

As we blogged before, the S&P 500 cash index resistance for the second half of 2019 is 2985-3004.  It was able to close above the resistance zone on a weekly basis last Friday.  We have to respect the price action.  The price action is speaking clearly that the correction bottom is in.  The bottom occurred on the first week of August. Now it is five weeks into the weekly cycle.

The benchmark 10-year Treasury note yield tested 1.5% in late August and early September, bouncing off that level and most recently trading around 1.8%.  That’s the third time the barrier has been broken since the economic recovery began in mid-2009, with the yield bouncing up strong each time. This signaled the renewal of the longest bull market run in Wall Street history that has coincided with the most durable expansion in U.S. history.

It is also rumored that the Trump administration is considering fiscal policies such as tax cut 2.0 to jump start the stock market.

However, the sudden drone attack on the Saudi crude production creates another dilemma for the market to contemplate, in addition to the trade war and Fed monetary policy concerns.

In the chart below, you can see clearly that the S&P 500 cash index is contained in the triangle even though it is above the resistance zone of 2985-3004.  If it breaks the top of the triangle, it’s bullish.  If it breaks below, it’s bearish.

In the face of uncertainty, we have to let the price action to guide us.  That’s why we have been very light on opening new positions.

The future is never crispy clear, but this time period is super unclear with so many extra external concerns.  When we have minimum clarity, it’s best to wait until we can have some visibility. 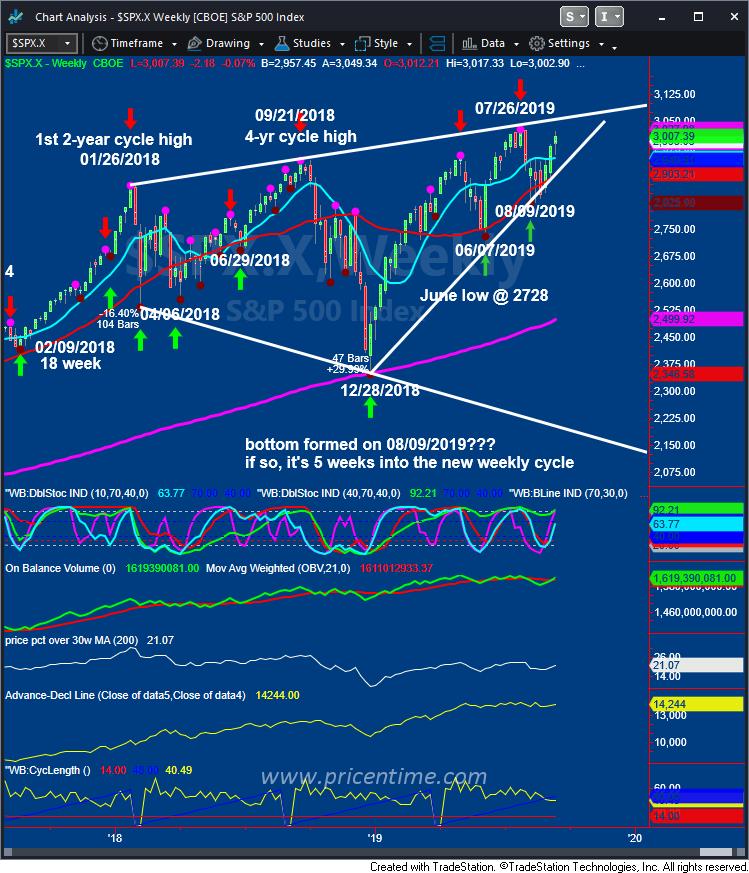 Member Only SP 500 weekly cycle
This entry was posted on Sunday, September 15th, 2019 at 10:16 pm and is filed under Forecasts, Member Only, Stock Indices. You can follow any responses to this entry through the RSS 2.0 feed. Both comments and pings are currently closed.