Calm Before the Storm

On Thursday October 3rd, the percentage of S&P 500 stocks fell below 10-day moving average reached 3.39%, which was an extreme oversold condition.  The market bounced immediately after the extreme condition was met briefly, but with weak volume on all indices.  The administration was leaking trade talk hope while the market was rallying on Friday morning.

The trade war has been going on over the last 18 months.  At every market low, the White House has always timely leaked positive news to protect the plunge.  Can they play the plunge protection game forever?  The answer will be tested shortly.  The pending implementation of additional tariffs is supposed to occur on October 15th, which is only 7 trading days away.  If the additional tariffs do go in effect, the stock market will turn down for real.  No amount of positive talk can spin this out of a market correction.  Yes, the Fed will respond in easy money policy, but normally the Fed is behind the curve.  The 10-year treasury yield has been going down steadily that has completely reversed the early September yield rally.  The current 10-year treasury yield behavior is very different than the last two times in 2012 and 2016 when the market faced recession threat.

All in all, at this point the market is extremely vulnerable for a sizable (10-20%) correction, which is needed to re-adjust the market valuation to reflect the fundamental challenges.

On the daily chart (not shown here), the S&P 500 cash index has made a bottom on Thursday Oct 3rd.  For the next 7 trading days before October 15th, the market daily cycle will be in low to high phase, meaning it will try to rally to test resistance zone 2956-3004.

In order for the market to breakout from here, the S&P 500 has to close above 3076.67.  As long as the S&P 500 stays below this breakout number, we want to error on the side of caution.  Let the market to finish the correction process.

So be super careful with your short trades, get out timely while you have some profits. 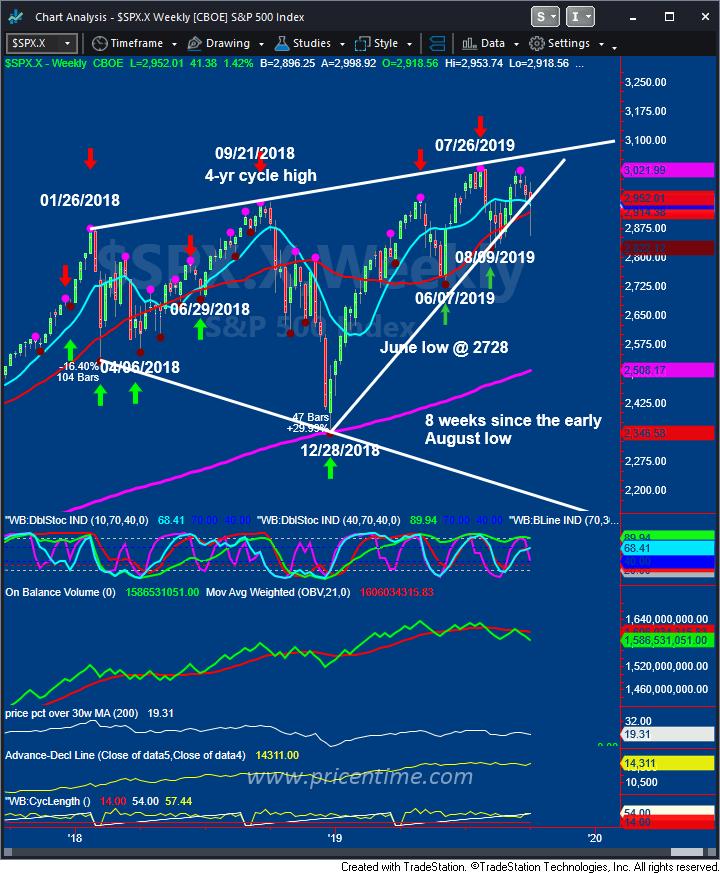 SP 500 weekly cycle
This entry was posted on Sunday, October 6th, 2019 at 6:21 pm and is filed under Forecasts, Stock Indices. You can follow any responses to this entry through the RSS 2.0 feed. Both comments and pings are currently closed.