Where is the Euphoria?

One of the world’s most successful mutual-fund managers, John Templeton once succinctly summed up the mass emotions in different stages of the stock market as: Bull markets are born on pessimism, grown on skepticism, mature on optimism, and die on euphoria.  The market is near all time high, yet the sentiment is very negative as the skepticism is bountiful about the many issues that have held the stock market hostage for the last 20 months.

Because of the track record of the past trade war negotiations, the investing community now refused to simply take the President’s words about the pending signage of the partial trade deal.  The sentiment has not changed because we don’t have a signed deal yet, but the S&P 500 cash index stubbornly produced a highest close of the previous 3 weeks on Friday, October 18th.  The price action is climbing the wall of worry and we need to take the message seriously.

The super software/cloud growth stocks and the consumer staples and utilities have been the stronger performers since the December 2018 low.  Now the software/cloud growth stocks have gone through more than 20% correction and the correction is not over yet.  The consumer staples and utilities have begun to show relative weaknesses due to its over valuation.

The cyclical stocks (materials XLB and industrials XLI) which have close ties to the state of economy have under performed since the December 2018 low.

Kemet products are projected to be used by the coming boomers of 5G and electrical vehicles.  The present P/E is 6.48 and it pays 20 cents annual dividend.  The attractive valuation had garnered institutional sponsorships. You can see from the chart below, KEM didn’t participate the rally from December 2018 to May 2019 at all due to the association with the trade war and being a small cap.  KEM has been beating the top and bottom lines in the last few quarters.  The price was kept in the base simply due to the sentiment. 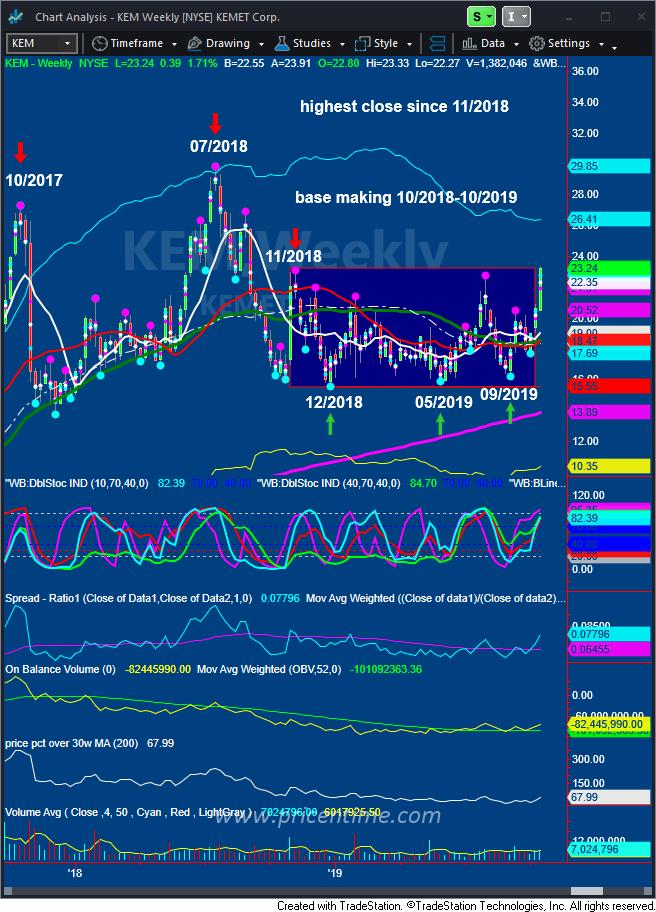 Around 24% of the S&P 500 companies are scheduled to release their quarterly results in the week ahead.  More than 14% of S&P 500 companies have reported through last Friday, FactSet data shows. Of those companies, 81% posted earnings that beat analyst expectations.  This quarter started with a very low bar, so it’s not surprising to see the earnings beat.  At the end of the day, it probably will be a case scenarios of “not as bad as feared” earnings season.

If corporate earnings show signs of resilience, especially by the U.S. consumer, then a run to new highs is by no means out of the question, because the trade noises are fading in the background.

Technically, the S&P 500 cash index climbed stubbornly against the wall of worry.  It has the potential to take out the top of the triangle very soon if the earnings are stronger than expected.

Cyclically, we may get a low in November, which could be the last scare right before the signing of the partial trade deal.

All considered, we haven’t found any euphoria in the stock market, in contrast, we have had a lot of worry.  A stock market top never was born out of worry.  So trust the sage’s words, there is an up leg right upon us. 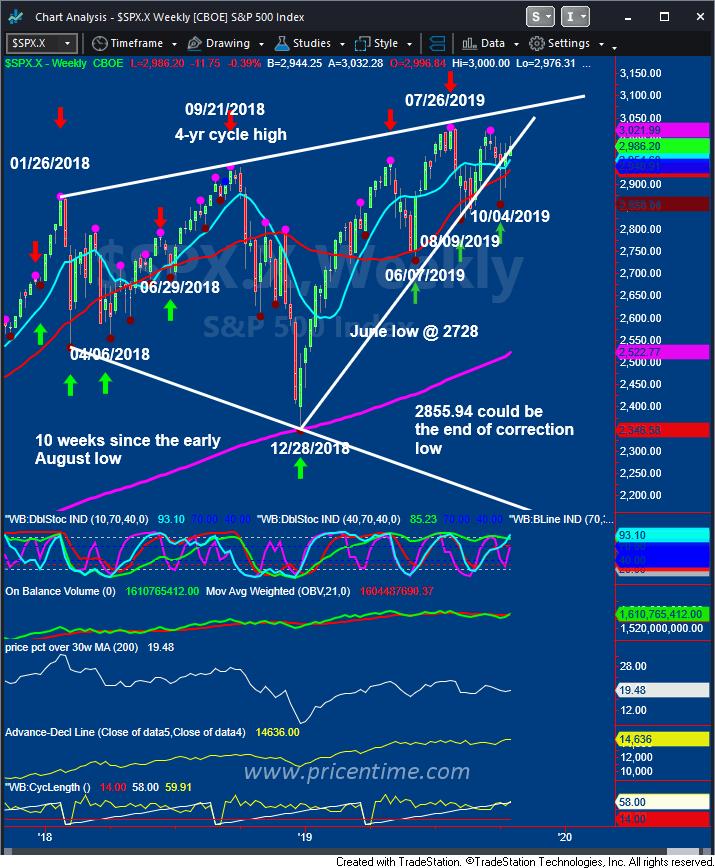 Member Only SP 500 weekly cycle
This entry was posted on Sunday, October 20th, 2019 at 7:29 pm and is filed under Forecasts, Member Only, Stock Indices. You can follow any responses to this entry through the RSS 2.0 feed. Both comments and pings are currently closed.