More Signs of the Resumption of the Bull Market

Last week the S&P 500 cash index closed a hair below the all the time of 3025.86.  No one can argue the strength of the price action.  It is climbing a huge wall of worry and repeatedly dispelled the worries of an imminent recession that have dominated the media.  We came to this conclusion by examining the internals of the market.

Even though the S&P 500 cash index is below the July all time high, the following sectors/stocks have broken out of the July high:

These four cyclical sectors are highly tied into the state of the economy.  The strengths in these sectors help us confirming the cycle counts in the general stock market.  In addition to the above mentioned sectors/stocks, WGO and THO showed up in our scanner for the top 1% performers relative to the S&P 500 in the last four weeks.  WGO (Winnebago  Industries, Inc.) is an American manufacturer of motor homes, a type of recreational vehicle.  WGO just closed above the June 2018 high, that is a sign of resumption of the bull market.  Not many people buy motor home vehicles if a recession is imminent.

Next Wednesday the Fed will make an announcement about the rate decision and forecast future rate cuts.  If the Fed keeps the rate unchanged next Wednesday, that’s good news.  It will mean that the economy is doing well and they know some good data the market doesn’t know.  If the Fed gives a rate cut as expected, then the economy is still soft and needs a little support.  Either way, the market will have some tantrum about the Fed decision, therefore some volatility.

Apple will also report earnings on Wednesday after the market close.  Apple has already made a new all time high, it is extended in price action.  If the earnings report produces a selloff, it is a buying opportunity.

All considered, the S&P 500 cash index cycle count became pretty clear to us.  The 08/09/2019 low at 2822.12 is the price low of the weekly cycle that started on 06/07/2019.  The 10/04/2019 low at 2855.94 is the cycle (time) low, or re-test of the August low.  So the summer correction ended at 2855.94 in early October.  From the early October low, three weekly bars have passed and it is closing in on the previous all time high.  The cycle energy turned around when the White House announced a phase one trade deal with China.  When such strong  turnaround energy produces a weekly cycle bottom, it normally will continue the weekly cycle until the time is due for change.

These two volatility inducing events are good buying opportunities.  The S&P 500 stoploss is 2855.94.  If the market trades below 2855.94, then we need to reconsider the direction of the market.

The impeachment may or may not be a factor for the market.  Any dip in the market is a buy as long as it stays above the early October low at 2855.94.

Alternatively, the S&P 500 cash index weekly cycle count can start from the early August low, which will put it 11 weeks since the early August low.  11th weekly bar is in the top timing band, which could cause a selloff event after the Fed decision.

All in all, we are very optimistic about the resumption of the bull market.  It is worthwhile to consider a position in Micron MU now.  The semi sector has already broken out, but MU has been kept under wraps due to the issues with the memory chip inventories.  While the fundamental issues remain right now, but the price action has come out of bottom.  The valuation is extremely attractive.  For semis, you have to get in early to benefit from the cyclical activities. 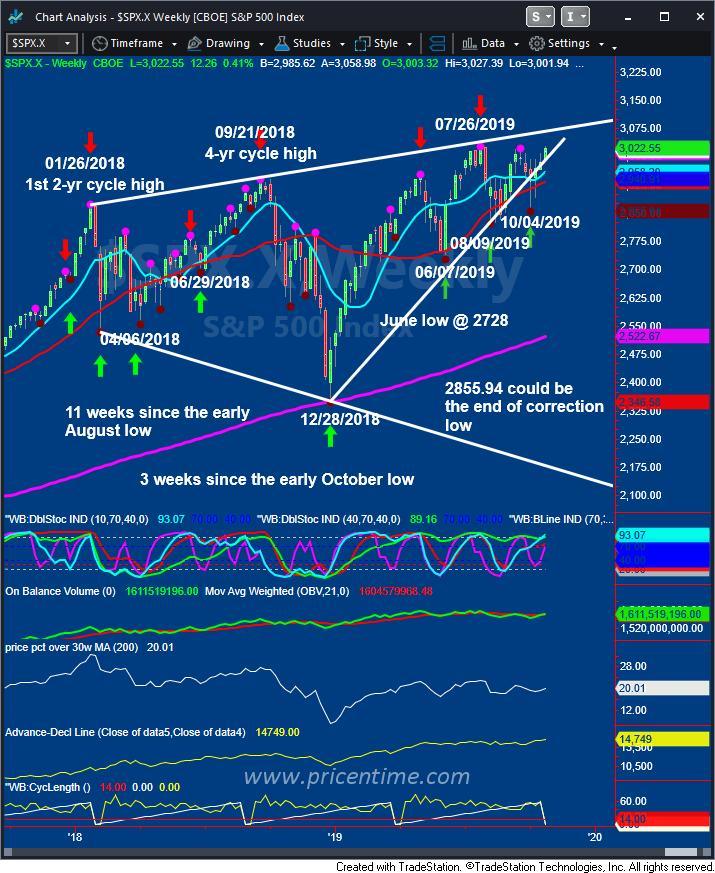 Member Only SP 500 weekly cycle
This entry was posted on Sunday, October 27th, 2019 at 6:41 pm and is filed under Hot Stocks, Member Only, Stock Indices. You can follow any responses to this entry through the RSS 2.0 feed. Both comments and pings are currently closed.