The S&P 500 cash index closed at 3066.91 at a record high last Friday.  Even though it is a hair below the breakout target at 3076.67, it could easily take down the target next week if the trade war news continues to be positive.  The Q3 earnings prove to be better or not as bad as feared.  It seems that all the stars are lined up to have a year-end rally.

However, the 10-year treasury yield is not showing the equally enthusiasm as the equities market.  It closed lower  on the weekly basis last Friday, plus it is trading below 1.903%, which is a swing high that must be overcome in order for the bond market to completely dismiss the risks facing the markets.  Based on our past experience, the bond market needs about 4 months from the early September 2019 low to work out the concerns.  That will lead us to January-February 2020 time frame.  By Q1 2020, the White House should have addressed all the self-inflicted risks such as impeachment hearings and trade war phase one agreement.  By then we will also find out the leading Democratic  presidential candidate and the possible outcome of Brexit.  These are the major concerns which must be addressed before a true bull market can take place.

The global slowdown concerns will be addressed by the global central banks’ monetary stimulus policies.  By Q1 2020 the global easy money policies will have real effects in the global economy.  So by Q1 2020 all the stars will really line up to have rallies in the global equities markets.

For the time being, the S&P 500 cash index is slightly overbought, but it doesn’t mean it can continue to be overbought.  Currently it closed 21.33% above 200-week moving average.

You can see the current 21.33% overage is approaching overbought level, not terribly overbought, nothing stands in its way to be even more overbought if and when it receives a phase one trade agreement.

In cycle timing terms, it is 4 weekly bars since the early October low.  If the seasonal pattern works this year, this weekly cycle will continue well into the year end.  It has the potential to rally another 4-5% to reach yearly resistance level 2 around 3192.  Energy is the most oversold sector in the last five years.  It starts to show sign of life with all the other cyclicals.  Instead of stressing about which sector or stock to buy for the year end rally, you could simply buy the triple QQQ.  We will send out private notes immediately if this rally is showing signs of breaking down before the year end. 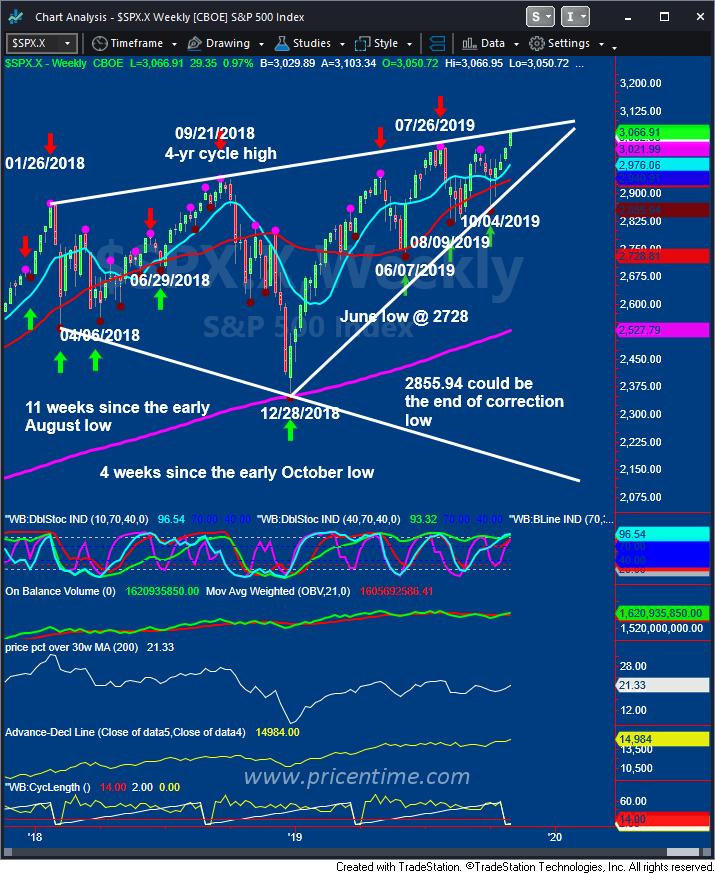 In our weekly scan, we found ticker SE (Sea Ltd) is outperforming the S&P 500 index by a very wide margin of 105.20%.  ROKU outperforms the S&P 500 index by 126.36%. SE is less known than ROKU so it caused us to study SE.  Normally this type of out-performance only happens to a few risky biotech stocks.  SE is an Internet company based in Singapore.  It has three divisions: digital entertainment, e-commerce and e-wallet operating in Southeast Asia.  Since its 2017 IPO, it has shown triple digits quarterly growth in 2018 and 2019.  It will report earnings on November 12th before the market open.  Q2 2019 has shown 65% EBITA  growth sequentially over Q1 2019, so it would not be surprised to see positive earnings in Q3 report.  The Southeast Asia region is less developed than China, probably it is 10-15 years behind China’s development.   So this is a brand new Internet opportunity and the potential growth is huge.  Alibaba is running an e-commerce platform in the region, but SE seems to operate with more local knowledge.  Tencent is a SE backer.  SE has a five-year agreement to publish Tencent games in the region.  SE also has published a self-made game Free Fire that is highly profitable.

SE broke out the IPO range at 17.19 in March 2019, it ran to 38 in early August.  Since the summer top, it corrected over 30% to reach a low at 26.41 in late October.  It closed at 29.90 last Friday.  It is slightly overbought and maybe it will be range bound before the earnings report.  Based on the past earnings history, it will probably have good news so it is worthwhile to buy some calls or own shares outright.  you can use 26.41 as the stoploss.  Try to buy as close to 26.41 as possible.

We mentioned NVTA recently.  Unfortunately the previous low of 16.05 was violated and it made a new low at 15.97 last week.  We are still optimistic about the DNA diagnostic testing sector and NVTA.  We will continue to monitor NVTA price bottom.  We will definitely get back in NVTA when the bottom works itself out.  Next Wednesday November 6th NVTA will report earnings.  The earning report could provide a catalyst for it to come out the price bottom.

EB will report earnings on Thursday November 7th after market close.  The price action has been positive.  It has traded above 150-day moving average.  Looks like it has real potential to break out the current range after the earnings report.

All in all, we are excited about the coming bull market after such a long time (20 months) of range bound activities.

Member Only SP 500 weekly cycle
This entry was posted on Sunday, November 3rd, 2019 at 7:57 pm and is filed under Forecasts, Member Only, Stock Indices. You can follow any responses to this entry through the RSS 2.0 feed. Both comments and pings are currently closed.