Last Thursday the 10-year treasury yield took out the September swing high of 1.903% and closed above it on a weekly basis.  So from the yield perspective, this is a risk on environment, money will be forced to flow out of the safe haven into equities.  The defensive sectors (XLU, XLP and XLRE) were promptly sold off to form a weekly cycle high.

The broad rally in financials and semi-conductors also confirmed that the market started a new leg of the really long bull market, even though there is no signed trade agreement.  The early October low at 2855.94 is the summer correction seasonal low.  Based on seasonality and weekly cycle timing band, the currently weekly cycle that started on 10/04/2019 will run into mid January 2020.  In the other words, the current risk on environment will last at least until mid January 2020.

There are many significant risks such as impeachment, trade war, brexit and most importantly the presidential election that the market will have to face in 2020.  The administration will try hard to jump the stock market, but the opposing forces are equally strong to try to defeat the current administration.  So 2020 will not be like 2017 that went up like a straight line.  2020 will have higher than average volatility therefore the market is not breaking out from the standpoint of a sustainably long-term rally. It is very possible that it makes a high in January 2020 then a correction follows.

In the weekly chart below, you can see the early October low at 2855.94 is confirmed as the summer correction low.  It has been 5 weeks since that low.  It’s overbought on the daily chart, so it might have a little down day here or there, but the weekly trend is strong and we anticipate this trend to last at least until year end. 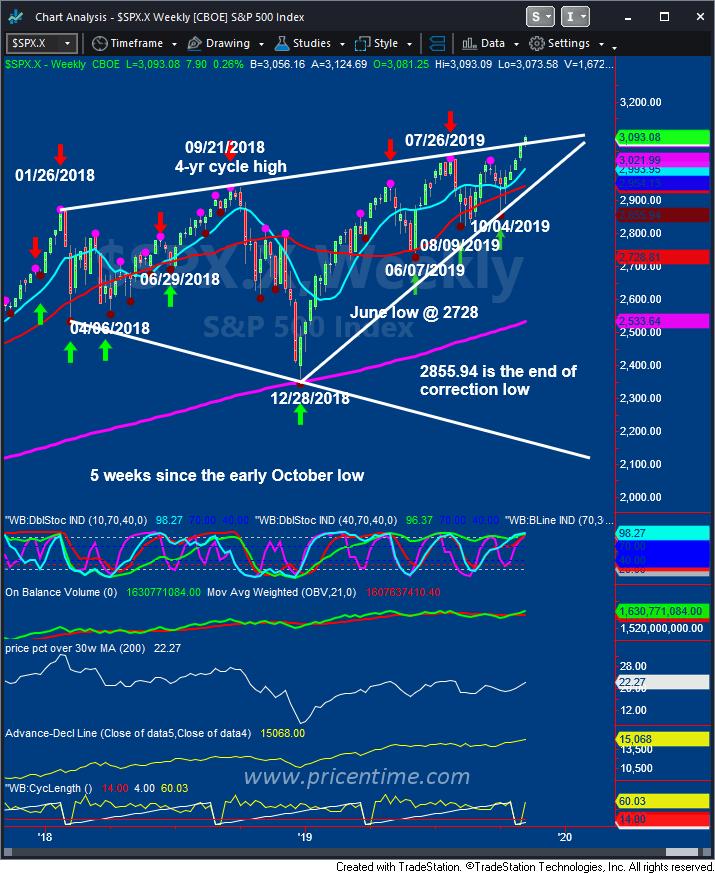 Eventbrite is almost done with the integration of TicketFly, a music ticketing platform it acquired last year, and now will be able to focus on product development and R&D. In our view, with the best digital tools and brands, Eventbrite is the platform leader in mid-market ticketing, well positioned to capture the long tail of ticketed events taking place globally.

The 23% rally took EB out of the penalty box that has been in since early May.  The bottom range of 15.30-19.99 was broken with volume.  EB should start to rally with the general market from here.  The long entry price is 20.00.  Next week it will probably try to reach 21.63 (monthly R4) to create another mini breakout just to trap the long side day traders, then it probably will be sideways to down to absorb the rally before the next leg up.   The investors’ entry price is 20, try to get in as close as possible to 20.

Member Only SP 500 weekly cycle
This entry was posted on Sunday, November 10th, 2019 at 7:20 pm and is filed under Hot Stocks, Member Only, Stock Indices. You can follow any responses to this entry through the RSS 2.0 feed. Both comments and pings are currently closed.