The trade war phase one deal was done, and the UK election was also done with precise victory for the Brexit party.  It seems like the coast is clear for the stocks market to march higher.  In our previous blog we have said that the present rally will last at least until mid January 2020. Based on the price action from last week, we affirm that indeed the S&P 500 cash index will march higher as long as it trades above the last month’s high of 3154.26.

However, despite such as a timely relief from the 20-month long volatile trade war, there is a dark cloud forming that could threaten the entire financial markets around the world.  On September 17, the Fed had to step in to rescue the repo market.  The repo rate spiked on September 17 to 10% from its 2% target, prompting worry around whether the Fed lost control of the nation’s money market. The central bank began repo operations soon after to ease pressures on the financial system, using the policy tools for the first time since the Great Recession.  Please click the link to read the details about the repo crisis.

Right now the mainstream media blames the repo crisis to post-crisis banking regulation and hedge funds.  But the real questions are:

The Fed is trying to project confidence by saying the economy and financial system are in good order. But in action the Fed has dramatically increased in the size and scope of its overnight repo operations.  The previous financial crisis started in the repo market with Bear Sterns and Lehman Brothers being refused of funding in the repo market.  The government bailed out Bear Sterns but refused to bail out Lehman Brothers, which lit the financial system on fire from that point on.

This time around, the US banks are in good shape due to the massive bail out from tax dollars and heavy regulation post 2008 financial crisis.  How could the US banks be in trouble?  No, the US banks are not in trouble by themselves.  But the US banks are interconnected with other major banks around the world.  The crisis epic center is in Eurozone.  There are 17 trillion negative interest rate Euro bonds worldwide.  Anyone holding Euro bonds outside the Eurozone had to pay money to the European central bank, this is never heard of in human history.  As a lender (bond buyer), you had to pay money to hold the debt instead of earning interest.  There are speculations about Deutsche Bank being in trouble.  The threat that Europe poses to the world is this clash in policies that they maintain only bail-ins, no bail out.  If Deutsche bank is indeed in trouble, the EU central bank will not bail out Deutsche bank because the other EU member countries will protest their money being used to help the Germans.  This explains why the US banks would not want to do business with the European banks in time of crisis, because if there is a bank goes down and there is no bail out, then that means any other banks around the world would simply lose 100% of any European holding.

The banks will report earnings in January 2020.  By law, the banks will have to disclose the liquidity issues when report earnings in January.  The EURO currency probably will foretell the trouble before the earnings report.  This development in repo crisis confirmed our re-thinking about the stock market 4-year cycle location.  Originally, we thought the December 2018 low was the start of a new 4-year cycle, and so far the three major indices have been acting like coming out of an early phase of a 4-year cycle, but the small cap index failed to be in sync with the majors.  The lag of the small cap relative to the blue chips is a strong telling of a late cycle behavior.

With the awareness of all the background information, we are going to listen to the market carefully.  When the selloff happens in January/February 2020, we know what is happening.  When the price action is confirming our forecast, we will put on trades with confidence.  Until then, we are going long with TQQQ with the November high of 78.82 as stoploss.

It’s been 8 days in the current daily cycle, which means it is in the timing band to make a daily alpha cycle high.  The market probably will be sideways for a few days to digest the trade war news while the repo crisis is happening in the background.

Because of the Fed’s repo operations, the Fed’s repo cash will find its way into the risky assets such as the stocks, therefore the indices will continue the rally until January 2020.  Again, we suggest only going long the blue chips, stay away from everything else.  This is the last puff of the 4-year cycle that started in February 2016 if our forecast is correct. 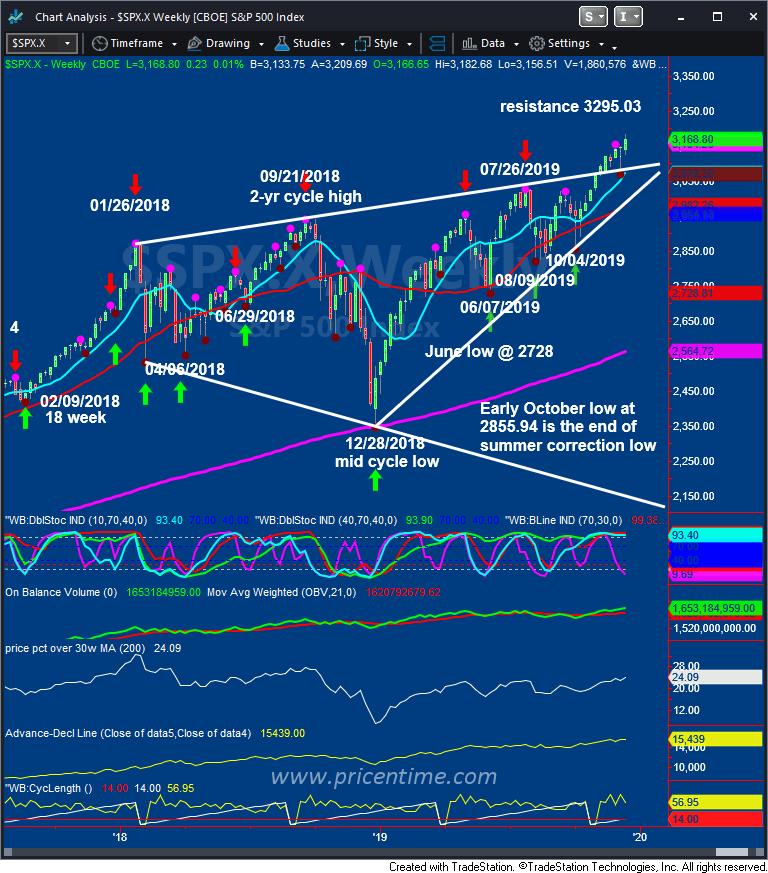 daily cycle SP 500 Two-Year Cycle weekly cycle
This entry was posted on Sunday, December 15th, 2019 at 6:19 pm and is filed under Forecasts, Member Only, Stock Indices. You can follow any responses to this entry through the RSS 2.0 feed. Both comments and pings are currently closed.