Finally the market is showing signs of a little weakening.  Last Friday all three indices made a new high at open, then it just didn’t have the energy to keep pushing higher to pass the open high in the morning.  It broke down in the afternoon session and closed near the low of the day.  The S&P 500 and the DOW made an outside reversal day on Friday, meaning they took out the previous day’s high and low in the same day session and closed below the previous day’s low.  This is a meaningful sign of top reversal because this happened at a fresh new high.  It is a little too soon to call this a top at the moment, but if it follows with more distributions in the next few days, then we have the confirmation of a top.

Coincidentally, the business confidence cycle turning point is January 18th, which is five trading days away from this potential top.  Is the market preparing for the turn?  We don’t know until that happens.  In the chart below,  you can see clearly the breakout against the trend line of the Jan 2018, Sept 2019 and Jul 2019 tops in early November 2019.  If this high at 3282.99 is a temporary high, then it has potential to correct 4-7% to test the validity of the breakout.  If it violates the breakout line and stays below it for a week, then the correction is not over and a larger correction will follow.  If it can barely touch the breakout line and stays above it for a week, then it is very bullish and the rally will resume.

The S&P 500 cash index is 26.75% over 200-week moving average, it is quite high in the early stage of the cycle if the cycle low started in December 2018.  The valuation is highly stretched in traditional measures, but because the interest rate is so low, which made the stocks less expensive, but certainly it is not cheap.  Many analysts are starting to call for an unstoppable bull market.  That sort of analysis normally precedes the high.  Remember this is the 11th year in the bull market which is often the time for a pause.

Interestingly, the 10-year bond yield (closed at 1.825% on Friday) hasn’t jumped over 200-week moving average at 2.318% at the moment.  If the economy is on the mend, the 10-year treasure yield should be higher than the 200-week moving average at 2.318% at this stage of the cycle location.  But it is not, this is another indication that the rally is the Fed engineered financial asset inflation.  Also the small cap Russell 2000 index hasn’t exceeded 2018 high.  As a matter of fact, the small cap didn’t participate in the 2019 rally.  It has shown a weekly cycle top which occurred in the last week of 2019.  There has never been a true bullish market that the small cap doesn’t participate.  Could be the few super mega caps such as Apple and Microsoft doing the bullish job for the rest of the stocks?

We will know more about the stock market outlook shortly after the turning point.  For the mean time, we highly suggest our subscribers to keep your power dry and don’t get sucked into the market at such lofty levels. 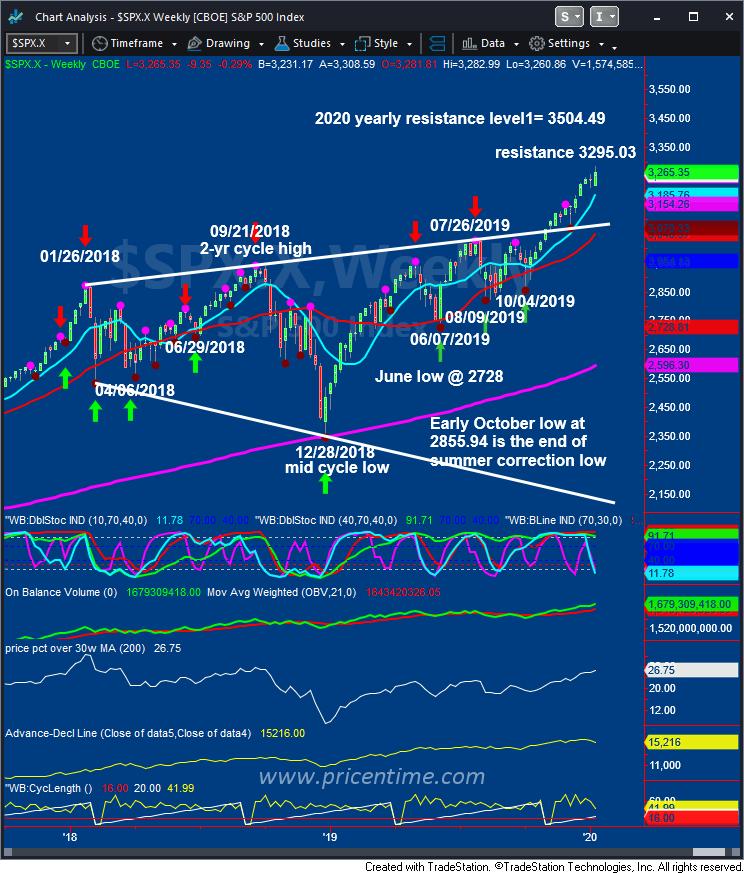 Member Only SP 500 weekly cycle
This entry was posted on Sunday, January 12th, 2020 at 7:49 pm and is filed under Forecasts, Member Only, Stock Indices. You can follow any responses to this entry through the RSS 2.0 feed. Both comments and pings are currently closed.