Distribution Is In Progress

Since the January low, the market rallied as if the coronavius is nothing to be concerned about even with the ever increasing number of deaths and infected patients in China.  Finally Apple came out warned the virus impacting the supply chain and sales in China.  The reaction to Apple’s warning was muted, only  the news about the virus spreading globally caused the market to have a hard selloff last Friday.

This is a great example of how difficult is to sell a bull market top.  The DOW responded to the turning point (01/18/2020) of the business confidence model, produced a high on 01/17/2020.  Then the DOW made another high on 02/12/2020 to take the shorts out.  There were people shorting the market based on the turning point because the coronavirus breakout confirmed the turning point’s validity.  Instead of making a retracement of the 01/17/2020 high to 01/31/2020 low, the DOW made a new high to force the shorts to cover the trade.  The market has been really bullish because of the Fed infused liquidity.  The hot money from all over the world has been piling in the stock market because the treasury yields are so low.

The market has gone thru three distribution days so far.  A distribution days is defined as significant decline (greater than 0.2% loss) in a major stock index in higher trading volume than was seen in the previous session.  A distribution day indicates unusually heavy selling by institutional investors, the heavyweights who largely set a market’s direction.  Four or five distribution days over several weeks nearly always signal that stocks have topped and are heading for a downturn. That’s similar to how persistent headaches, coughs and sneezes suggest that you ought to call in sick and break out the chicken soup.

The democratic socialist candidate Sanders won the Nevada race over the weekend, which will sure cause some panic in the market next week.  The market definitely doesn’t like Sander’s socialist agenda.  This correction could last until April, then rally to make a June high.  From the June high, the market could be sideways waiting for the presidential election. 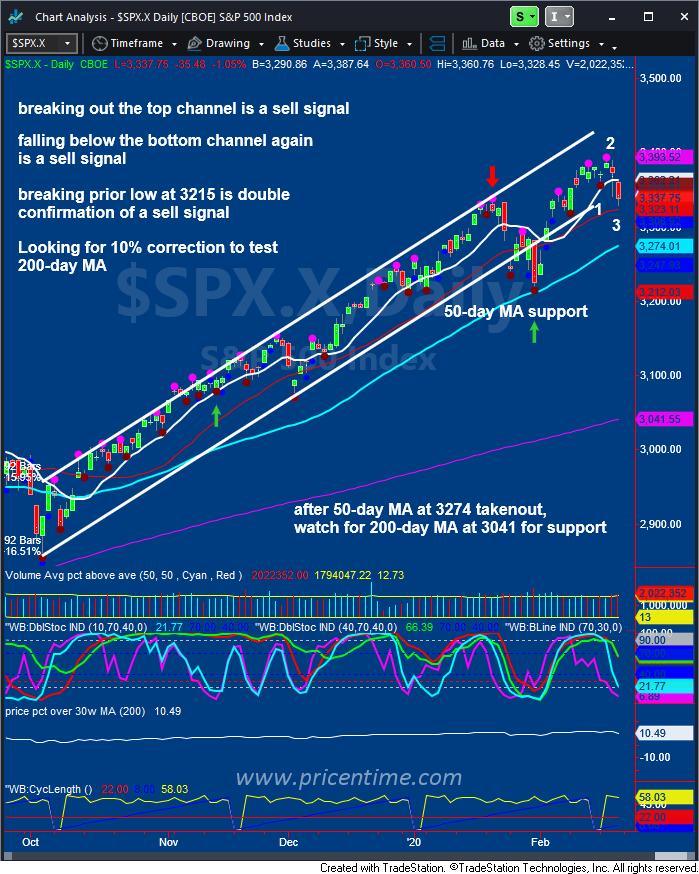 All in all, this is a secular bull market.  Buying the big dips will work until 2032.

Recently GILD has shown some sign of life due to the coronavirus outbreak.  The phase 3 trial of Remdesivir is on going in China.  The clinical trial result will be released in early April.  Normally it is not a good idea to buy a stock while the market is undergoing a correction.  75% of stocks move in the same direction with the general market.  But in the case of GILD, we should make an exception for the following reasons:

With the global breakout of the coronavirus, if the clinical trial proves Remdesivir is effective, it will sure be the catalyst that GILD really needs to get out of the secular bear market.  We have opened a trial position with GILD, but will add more when it can trade above the 200-week MA convincingly.

Member Only SP 500 weekly cycle
This entry was posted on Sunday, February 23rd, 2020 at 5:44 pm and is filed under Hot Stocks, Member Only, Stock Indices. You can follow any responses to this entry through the RSS 2.0 feed. Both comments and pings are currently closed.