Last Friday all the indices closed at a new low, but didn’t make a new intraday low.  The VIX also dropped from 85 at the peak of the panic on Wednesday to close at 66 on Friday.  All three indices violated its perspective 200-week moving average with the DOW penetrating the deepest below its 200-week moving average (19.92% below its 200-week MA).  The market is extremely oversold, but the forced liquidation could go on until next week or the week of April 6th.

As of Sunday evening 8:45 pm, the Senate failed to pass the Coronavirus stimulus bill and the futures market briefly hit “limit down”.  The uncertainty related to the stimulus package will be the driver of volatility for the next week.

According to Bloomberg, the “low volatility” strategy accounted for roughly $1.5 trillion in assets under management (AUM) before leverage, $500 billion of which were in risk parity funds and $350 billion in vol-targeting funds, their unwinding likely accommodated by massive trading volumes last week.  The shift toward “low volatility” strategies that accelerated after the global financial crisis in 2008-9 is reminiscent of the failed “portfolio insurance” strategies during October 1987 that caused the largest one day percentage decline in US equities in history. The markets seemed off kilter for roughly a quarter as they bounced along bottoms but then resumed the bull market eighties about which most investors who are still engaged in the business reminisce.

As we said in our private email to you last week, you will typically get 43%-53% correction which will be enough to cause everyone to puke out their long-term investments and then the rally begins.  You must swing in the opposite direction before the real move takes place.

We are facing a slingshot up.  The reason, the real crisis is in government.  Europe has destroyed its bond market as has Japan.  That means they have LOST the confidence of the people in the capital markets.  When this decline concludes, then people will notice the crisis in government.  The flight to quality will then reverse and head toward private assets.

So don’t panic and wait for the opportunity to catch the fire sale bargains of lifetime.

From the chart below, you can see the DOW has violated the 100-month moving average at 19325 and the long term trend line connecting the 2009 low and 2016 low.  The DOW at 18000-17200 level provides strong support because that’s the level where the 4-year cycle broke out from.  The 4-year cycle started in Feb 2016 broke out the 18000-17200 level to make the February 2020 high.  Now it has given up all the gains and hit the roughly 10 year (100-month is treated as 10-year time span) average.  This is the low risk area where you want to be bullish.  America is not going out of business.  Everything will be returned to normal after this horrible mess.  If you do go long at this low level, we suggest you pick blue chip stock such as Microsoft.  We recommend blue chip stocks with growth potential.  We will blog more in the future as to why we need to be in blue chip stocks instead of the smaller growth stocks. 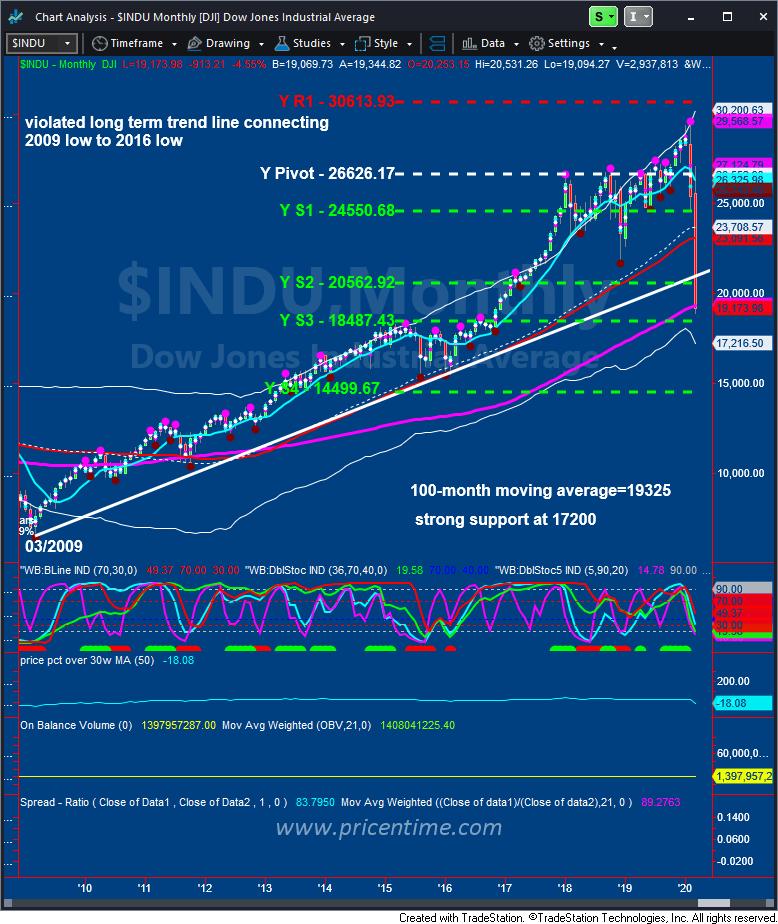 Member Only SP 500 weekly cycle
This entry was posted on Sunday, March 22nd, 2020 at 9:22 pm and is filed under Member Only, Stock Indices. You can follow any responses to this entry through the RSS 2.0 feed. Both comments and pings are currently closed.