Where is the Bottom?

In the last six weeks the S&P 500 cash index has dropped more than 35% measured from high to low.  This has been the fastest decline in the history of the stock market.  The furious decline only put a temporary bottom in last Monday when the Fed announced unlimited QE and the two trillion aid package was signed into law.  From the scope of the Fed actions and the fiscal policy response, you can tell that this coronavirus crisis is much bigger than the recent financial crisis in 2008.  The S&P 500 cash index dropped 57% in 17 months during the 2008 financial crisis.  What are the coronavirus crisis bear market’s duration and downside target?

Fundamentally, there has to be a medical solution to the coronavirus crisis or the virus spread has been contained before the bull market can start.  The monetary and fiscal policy will help the stock market to ease the pain while the medical community is desperately trying to find solutions.  So we are watching the developments in the hunt for medical solutions while having the technical price and time targets in place. 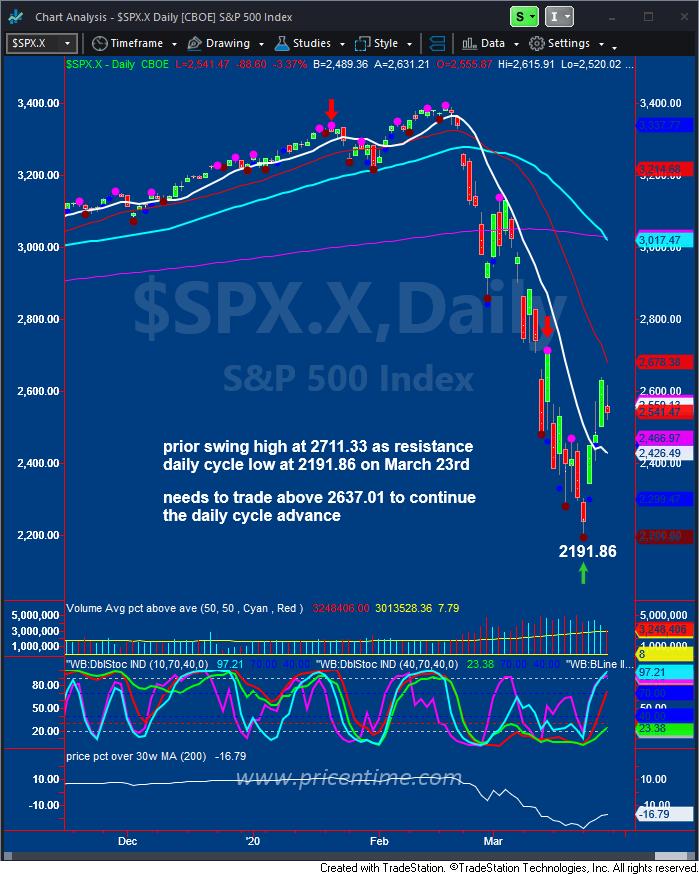 The 18% advance last week is a classic bear market rally.  If you want to trade those bear market rallies, you have to be very fast to take profits.  This is not an environment for long term investment yet.

Member Only SP 500 weekly cycle
This entry was posted on Sunday, March 29th, 2020 at 10:56 pm and is filed under Forecasts, Member Only, Stock Indices. You can follow any responses to this entry through the RSS 2.0 feed. Both comments and pings are currently closed.