Impressive Rally yet Still No Weekly Signal to Go long

On April 9th, the Fed announced that they will extend credit to banks that issue PPP loans, purchase up to $600 billion in loans issued through the Main Street program to medium-sized firms. The moves also involve secondary corporate credit facilities that will allow the Fed to buy corporate bonds from “fallen angels” that have slid into downgrades, and a $500 billion program to buy bonds from state and municipal governments.  The historic Fed actions have shaken the market participants, no one has ever expected that the Fed would go this far.  The daily cycle inverted immediately, meaning it was due to go down on April 9th if there were no Fed actions.  Instead it went up and down for 5 days indicating its internal debate about the effects of the Fed actions.  Then on last Friday, the market gaped up and closed in a strong position due to some positive development in the virus medical treatment front.

The stock market sure is telling a blue sky story while the reality/economy is far more gloomy.  Which one is telling the truth?  Can we trust the price data or our personal opinion about the economy?

We went back 30 years and examined major market bottom turning points to compare against the present rally.

Here are some of the findings:

1. Despite the 31% rally from the March 23 low, the weekly cycle oscillator still hasn’t registered a buy signal.  In a different model we track, it didn’t register a buy signal either.

2. The weekly cycle oscillator behaved much stronger in the previous major bottoms such as October 1987 low, March 2009 low, February 2016 low and December 2018 low than the March 23 low.

The cycle software could be wrong.  But at this point, even if the March 23 is the final low, we still shouldn’t chase the market after a 30% rally.

Patience is a virtue when dealing with the stock market.

On the daily chart, there is a cluster of resistance around 2950 level.  On the weekly chart, the half cycle oscillator is approaching 90, a very overbought location.

The tech earnings season starts next week.  Let’s see how the market reacts to the earnings report and guidance. 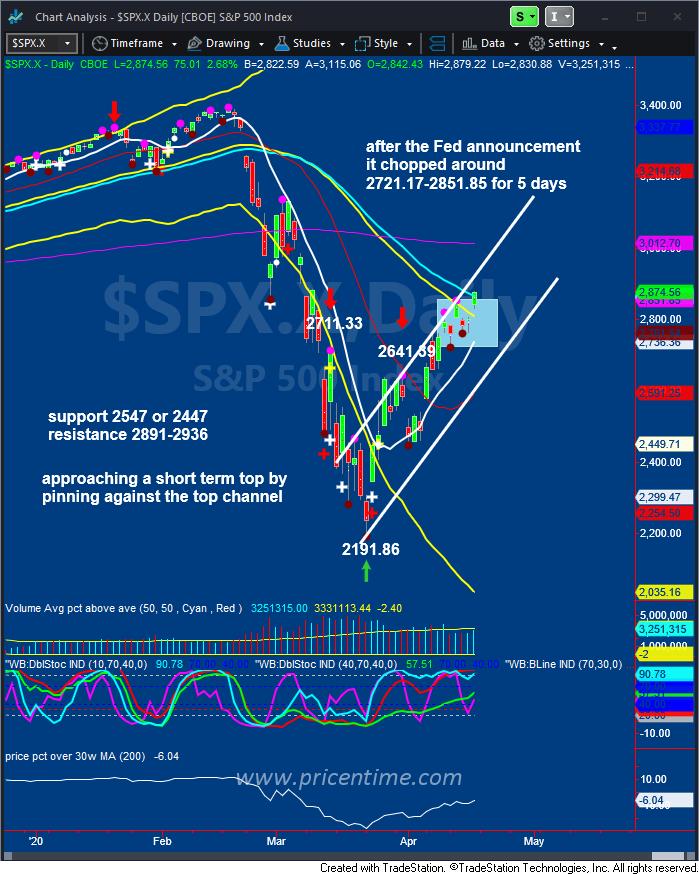 SP 500 weekly cycle
This entry was posted on Sunday, April 19th, 2020 at 10:12 pm and is filed under Forecasts, Stock Indices. You can follow any responses to this entry through the RSS 2.0 feed. Both comments and pings are currently closed.