The Unknowables of Covid-19

In the last two weeks, the S&P 500 essentially chopped around the range established after the Fed nuclear option (buying junk bonds) announcement.  Underneath the three indices, there are vastly different performing sectors reflecting the new Covid-19 driven economy and the related stock performance.

The S&P 500 is just 16% off its all-time high and up 29% off its low a month ago despite a pandemic that’s cost 26 million jobs.  From the S&P 500 perspective, you can’t trace the damaged done by the historic global health challenges unleashed by Covid-19.  Under the hood though, we can see plenty of carnage.  The stock market has been held up by the three steady secular-growth sectors such as tech, healthcare and consumer staples.  Any stocks/businesses that are in need of the crow to conduct normal operations have been damaged badly.  The damaged stocks are telling the story that the economy will take some time to heal and the bottom is with no end in sight.

The coming week is full of catalysts to move the market.  The major mega cap tech companies are reporting earnings that could move the market or set the tone for the reminder of the quarter.

There were only two times in the past that all five major mega cap companies report earnings in the same week.  These top 5 companies counts for 20.7% market cap of the entire S&P 500 market cap.  This really shows where the money is hiding in the relatively safe area.  The market is defensive, not exhibiting early cycle risk-on appetite.

In the week of January 26, 2015 all top 5 companies reported earnings and the next five sessions the market dropped 3.7%.

In the week of January 29, 2018 all top 5 companies reported earnings and the next five sessions the market dropped 3.9%.

Both in January 2015 and January 2018 the market was in toppy condition.  Could we see it happen again this time?  The odds are greater than 50% considering the market just had a great bear market rally.

Among the top 5 stocks, MSFT is the most defensive one.  AMZN stock is very expensive and cost is very high for Amazon’s business.  There might be disappointment in the earnings call. GOOGL, AAPL and FB are more affected by the slowing economy than MSFT and AMZN.

GILD is another market swing factor.  GILD’s Remdesivir has been rumored as a promising anti-viral medicine to fight Covid-19.  GILD will announce a company led trial (without control arm) results next week, it could be announced before or after the earnings report.  GILD also has a placebo controlled trial that’s due out in mid to end of May.  There is no treatment for Covid-19 presently.  So if Remdesivir is proven effective to combat Covid-19, the market will respond.

Technically, the oil crash low @ 2727.18 on Tuesday April 21 was protected by the early low @ 2721.17.  Since the oil crash low, the three indices were not able to take out the  April 17 high at the moment.  However, the second tier tech stocks like PIN and SNAP were out performing the first tier stocks in the last three days.  PIN and SNAP are being affected by the slowing economy because their main revenue come from digital advertising.

We sent out an email to buy PIN on Wednesday at 18.23 and then we canceled it on Friday.  Yes, PIN is presenting a breakout chart.  In a normal market condition, we should by it. But buying a breakout stock in a toppy market condition like what we are in now increases the chance of failure.  Cash is king.  We need to be disciplined with our cash.

We own GILD and PIN in our portfolio.  We are planning to liquidate both positions when the general market condition turns down.  Getting out of GILD is buy the rumor and sell the news type of trade.  We have had PIN for sometime.  We plan to add more PIN when the market goes down.  The 52-week low of PIN is at 10.10, we want to buy it at closer to the bottom as we can.

Why are we confident that we want to buy the bottom?  The answer lies in the Fed’s monetary policies.  The Fed is printing money and we want to be part of the game, just not right at this moment yet.

From the chart below, you can see there two support levels.  One is the lower of the box at 2721 and the other is the prior swing low at 2447. 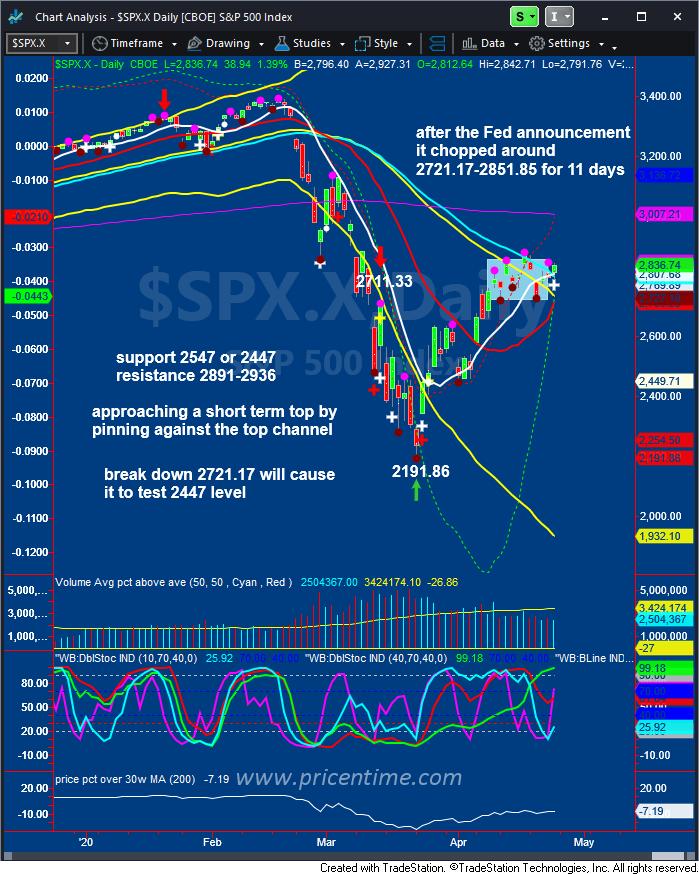 Member Only SP 500 weekly cycle bottom
This entry was posted on Sunday, April 26th, 2020 at 7:00 pm and is filed under Hot Stocks, Member Only, Stock Indices. You can follow any responses to this entry through the RSS 2.0 feed. Both comments and pings are currently closed.