It Is Still A Bear Market Rally

Last week Nasdaq had an outside reversal weekly bar, meaning it traded lower than the previous week’s low and then closed higher than the previous week’s high.  When this happens, it is indicative of further momentum on the upside.  The Dow and S&P 500 also closed on the strong side on the weekly bar.  The short term momentum is strong, meaning the S&P 500 probably will have the energy to test the 200-day moving average which is around 3000 in the next week or so.  It would be a bigger bull trap if it stays above 3000 for a few days.

Typically when the market can stay above its 200-day moving average on a closing basis, it means a start of a new bull market.  However, in the past, the market has shown that it can also vacillate around the 200-day moving average a few times before it is finally over.  The longer term momentum on the weekly chart, however, is the weakest when compared to the past rallies even though the percentage gain is larger.  Therefore we reaffirm that caution is highly recommended.  The market may or may not reach the March 23 low again, but definitely it is now approaching a very credible resistance.

It is very difficult to sit out a raging bear market rally, but financial safety should be a major concern when we are dealing with an unprecedented event.  Even the greatest investor Warren Buffett sold out all his airline stocks, very contradictory to his signature buy the fear mantra.  Warren Buffett doesn’t have the short term visibility, although he has always been very bullish on the US stock market on a very long term basis.

So please double check your risk tolerance.  What is your investing time horizon ? 5 or 10 years?  If it is 1-2 years, then you should watch the S&P 500 around 3000 level and get ready to get out, perhaps get back in again around 2500-2600 level when the proper signal presents itself.  Frequently the market doesn’t play out as we planned, that’s why it is recommended to hold a core long term position and trade around only with the short term positions.

We sent out an email last Tuesday about ticker EB.  EB will report earnings on Monday after the market close.  The short term momentum is very strong, the upside target could be around 15.  If it sells off before the earnings report on Monday, it should be bought to anticipate the rise after the earnings report.  There is always a risk to play the stock right before earnings, so please do check your risk tolerance.  EB has pivoted to online events, which presents a new life for the company.  Before the pivot, the company could be left for dead since no one knows when and how the Covid-19 will be completely ruled out.

Below is the S&P 500 daily chart.  Right now the April high at 2954.86 is the immediately resistance, after that the 200-day moving average will be the resistance.  Time wise, we should expect next week to be a strong week.  The following week is what we should be very careful.  The week of the 18th could be the start of the correction.  We shall see. 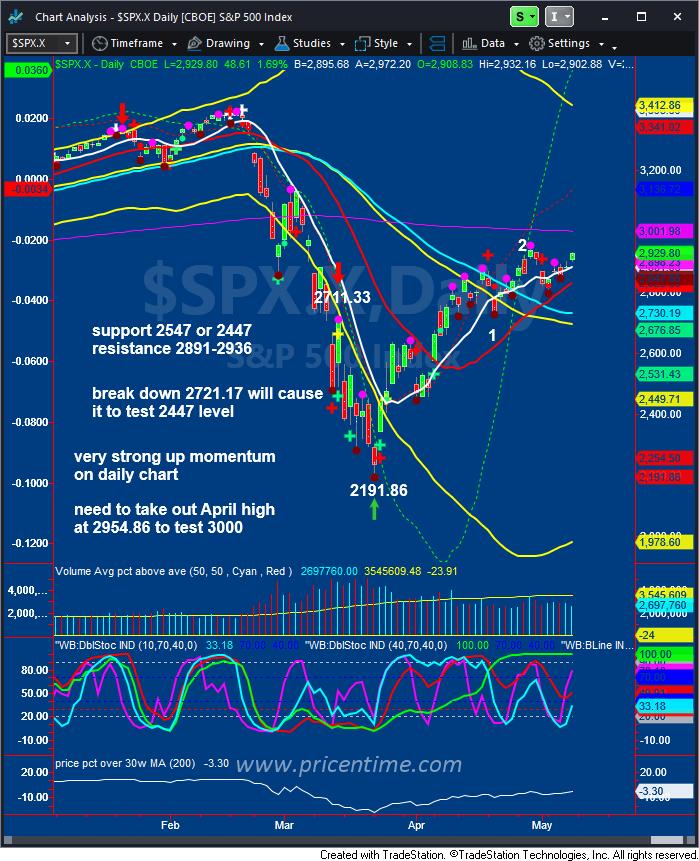 Member Only SP 500 weekly cycle
This entry was posted on Sunday, May 10th, 2020 at 6:33 pm and is filed under Hot Stocks, Member Only, Stock Indices, Trade Recommendation. You can follow any responses to this entry through the RSS 2.0 feed. Both comments and pings are currently closed.