The Sell Signal Is Busted

Last week we have been emailing to our member subscribers that a sell signal has been confirmed in all three indices.  However, after a 6% selloff, the market staged an impressive comeback on Thursday and Friday.  The strength of the comeback disarmed the sell signal, even though it didn’t reach the stoploss point yet.  A valid sell signal doesn’t behave this way.

As we blogged before, the market is toppy, yet there is no outright short signal.  It is in a distribution process that allows the institutions to get out while maintaining the market in a positive mood.  The market had the shortest time in distribution process during the February to March selloff because of the sudden realization of the global outbreak of Covid-19.  It’s very hard to have that situation repeat again in such a short time.  Therefore we have to be patiently waiting for the market to develop the crash signal.

During the bear market relief rally, tech and biotech sectors outperformed the S&P 500 index by a wide margin.  ETF IBB just broke out a five-year old top.  Biotech didn’t perform since the 2015 top.  Now the money is rotating to the sector due to the healthcare crisis and recessionary environment.  You should add QQQ and IBB investment positions during the next market selloff.

In addition to the large safety investment positions such as QQQ and IBB, today we would also like to introduce KPTI.

KPTI is a small cap biotech stock with less than $2 billion market cap.  The company had a breakthrough year in 2019 thanks to the launch and success of its novel drug Xpovio (Selinexor), which is the first and only approved treatment for the blood cancer known as relapsed or refractory multiple myeloma targeting at the Nuclear Pore.  There are other three different classes of drugs treating multiple myeloma.  Xpovio is the first in the fourth class to treat multiple myeloma.

Karyopharm saw tremendous sales growth after the Xpovio launch in July. Xpovio sales for the full year were $30.5 million, with $17.7 million coming from the fourth quarter. Prescription demand was up 65% in the fourth quarter alone. More than 550 physicians prescribed the drug in the first six months, for about 1,400 prescriptions filled through the end of the year. This trend is expected to continue with the success of Karyopharm’s pipeline and clinical data updates.

There are several notable catalysts coming up that should drive the stock higher:

An approval from the FDA for the use of Xpovio on DLBCL patients would represent a major commercial opportunity for Karyopharm. The market for DLBCL drugs is expected to grow to $4 billion by 2022 from less than $2 billion in 2016. Analysts are bullish on the stock, projecting an average price of $32.56, with a range of $25 to $43. Karyopharm has roughly $385 million in cash and investments, which should help it fund operations until mid-2022. Given that cash hoard and the potential positive catalysts on the horizon, Karyopharm’s stock could easily rise higher with a potential approval in June.

Technically, the stock has been range bound (13.71-29.61) in April and May due to the uncertainty surrounding with the pending FDA decision.  The stock has been in secular up trend since it jumped over 200-week moving average in October 2019 (not shown below in the monthly chart).   In our view, in the worst case scenario, if the June FDA decision is not favorable, the company will suffer a setback, not a total loss like many of the biotech binary situations because it already has a FDA approved drug that is generating revenue.

On May 29-31, 2020, the company will present clinical trial data at the American Society of Clinical Oncology 2020 Virtual Scientific Program.  The data has been submitted in the application for Selinexor to be used as the second line treatment for multiple myeloma.  There is a pending FDA decision on June 23rd.  Therefore the stock will not be dormant for much longer.

We will be taking a position in any weakness.  200-day moving average is an ideal entry. 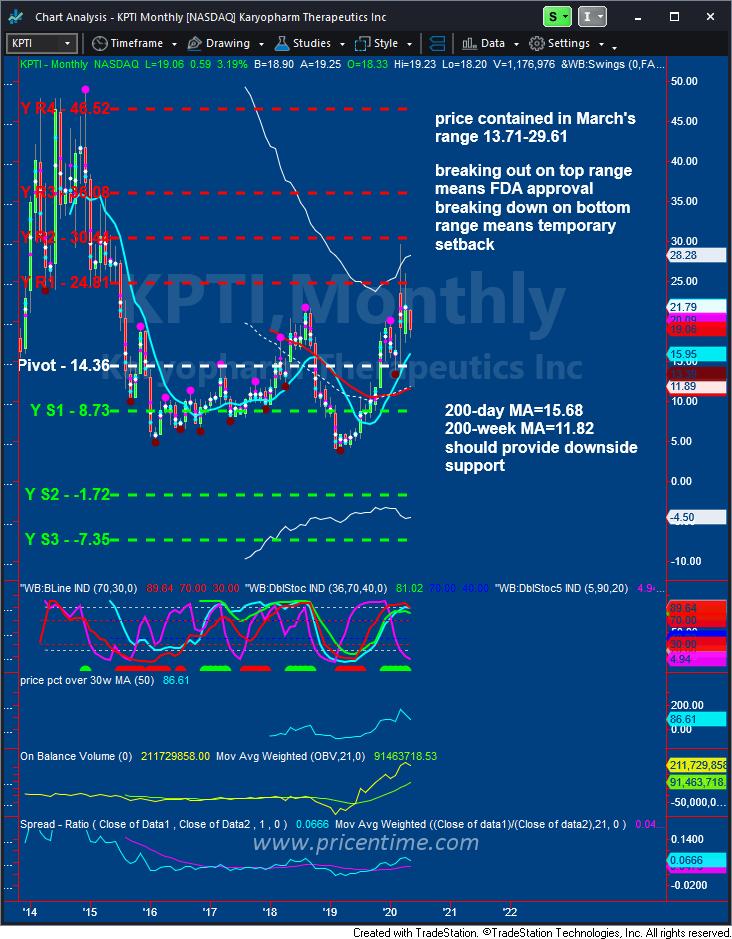 Member Only SP 500 weekly cycle
This entry was posted on Sunday, May 17th, 2020 at 7:48 pm and is filed under Hot Stocks, Member Only, Stock Indices. You can follow any responses to this entry through the RSS 2.0 feed. Both comments and pings are currently closed.