The market has spoken by producing an outstanding week on the 10th bar from the weekly cycle low which took place on March 23rd.  The magnitude of the bounce in price and time establishes that the March 23 low is a four-year cycle low.  Since the Nasdaq took the lead to make an all time high, which establishes the basis for an immediate bullish 4-year cycle, meaning the next two years will be bullish.  It could be more than two bullish years, but two years are the minimum that we can expect the market to overcome all barriers to march higher.  We believe a new bull market has been launched, but there could be pullbacks and some headwinds for the market coming up.

When GDP is minus 30%, other issues don’t matter. There’s just one issue. But as the economy reopens again, the trade battles will matter again, presidential politics will matter again.  The trade battles and presidential politics will dominate the market focus starting in mid August when we expect a seasonal high.  Therefore we believe the reopening trade could last until mid August.

We apologize for calling the new bull market late.  We underestimated the power of liquidity coming from monetary and fiscal sides simultaneously.  Due to stimulus package, people actually had more money during this recession which made this recession the shortest.  The 1o-year bond yield has turned around, which will provide enormous capital flow into the equities.  With the huge cash pile on the sideline, the stock market will have even more fuel to go higher.  Since we are not even three months away from the 4-year cycle low, there will be plenty of opportunities ahead of us.  Right now the focus is the reopening trade.  The stocks that were unduly sold down because of the forced shutdown of economy will work hard to make up the lost ground from now until mid August.  Specifically, the financials, energy, industrials, travel, airlines, casinos, as a matter of fact, any anti-social distancing stocks will perform well from now until mid August.

We recommend JETS and XLE ETF.  These two ETFs have been severely oversold and they have more room on the upside.  We had recommended EB which is an anti-social distancing stock.  EB has performed well last week and still has room on the upside with this reopening trade.

In the S&P 500 daily chart below, you can see that it is 15 days into the 3rd daily cycle and it getting close to the upper channel line, which could provide resistance around the psychological 3200 round level.  But that resistance will be digested by having a few days of sideways movement because the strong upside momentum will help to overcome that.

Again, we believe a new bull market has been launched with Nasdaq as the leader.  You should add XLK and IBB at any sizable pull back.  Tech and biotech will be the leaders in the new bull market.

KPTI is under pressure due to the uncertainty associated with the pending June 23rd FDA decision.  It could be further sold to around 16 level in the next two weeks.  So far we haven’t found anything that would indicate negative decision from FDA, therefore we are comfortably holding our position. 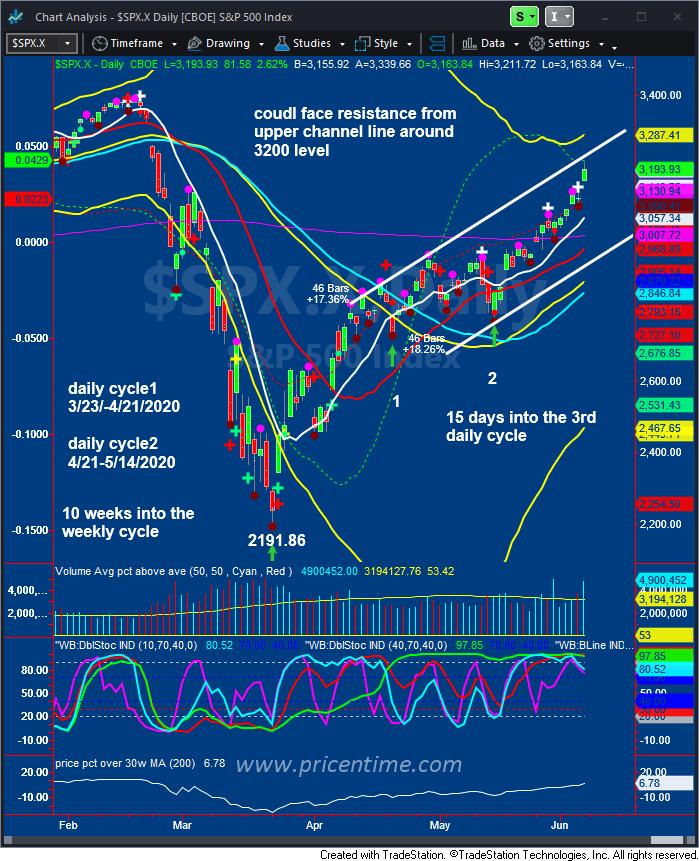 Member Only SP 500 weekly cycle weekly cycle bottom
This entry was posted on Sunday, June 7th, 2020 at 8:31 pm and is filed under Forecasts, Member Only, Stock Indices. You can follow any responses to this entry through the RSS 2.0 feed. Both comments and pings are currently closed.