Even though it is not an ideal weekly outside reversal bar, it is signaling that the weekly cycle is entering the high to low correction phase.  Because the outside reversal happened on the 11th weekly bar, sooner than the 15th bar, which means the weekly cycle is not a true bullish cycle.  The timing of this correction implies that the downside target could be greater than the typical 38% retracement of the rally.  It could be 50%, 62% retracement or even a re-test of the low.  The correction would last 7-8 week to finish the weekly cycle.  We have to let it to run through the course to determine the eventual downside target.  Time is more important than price.  The 50% retracement is 2709, 62% retracement is 2587 and the 200-week moving average is 2689.  These are all potential downside targets, but really the eventual price target is determined by the time target.

On the daily chart, it is 20 days (in possible bottom timing band) into the 3rd daily cycle and the price is being supported by the lower channel line and 200-day moving average last week.  If the price bounces from this low along the lower channel line, then we could have a bottom on the 3rd daily cycle.  It could start the fourth daily cycle from here to make another rally attempt before a real correction.  The reason we suspect this last rally is because the dip buying behavior in airline stocks on Friday and how the three indices closed on Friday by failing to produce a real outside weekly reversal bar.  Remember the Fed is buying everything to support the market.  There will be a lot of dip buying during this correction phase therefore the momentum on the downside will be less powerful than the last crash in March.

Right now as of 10 P.M. on Sunday night, the S&P 500 futures is down more than 1% implying a continued down day on Monday.  But this overnight futures may change on moment’s notice.  So we can’t rely on this overnight action to predict how Monday will trade.

We have to wait and see how this plays out on Monday. 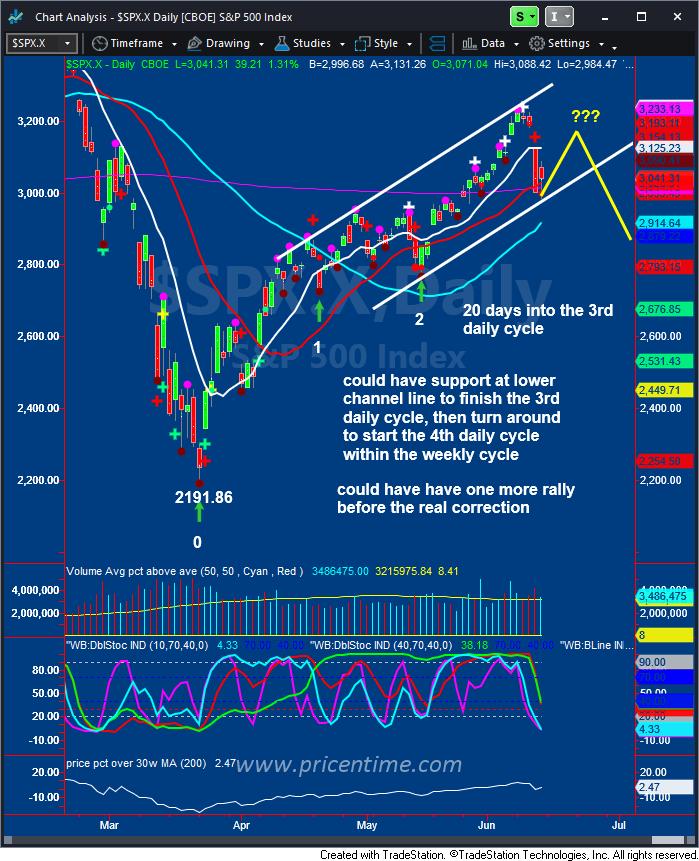 There were some dip buying in the airline stocks last Friday after the big selloff on Thursday.

Member Only SP 500 weekly cycle weekly cycle bottom
This entry was posted on Sunday, June 14th, 2020 at 10:20 pm and is filed under Forecasts, Member Only, Stock Indices. You can follow any responses to this entry through the RSS 2.0 feed. Both comments and pings are currently closed.