Finally the crazy NASDAQ momentum stocks took a break without any apparent catalysts last Thursday.  Apple lost almost 20% in two days measured from high to low, but it was able to close off Friday’s low.  The usual buying the dip crowd showed up again last Friday around 11 am when NASDAQ almost hit its 50-day moving average.  Is the correction over?

In order to answer the question, we need to know what kind of top we just had.  This September top was originally inspired by the easy money policy, but the August speculative fever pushed it over the top.  We just found that Softbank bought billions in individual stock options, betting on high prices for the biggest names in tech over the past month, driving up volumes and contributing to a trading frenzy.  A lot of the call buying was an upward lift to the market. The sellers of those calls, then had to buy stocks and hedge and it becomes a self-fulfilling prophecy on the upside.  Strength begets strength until it doesn’t.

Of course, as long as the NASDAQ is in correction, the rest of the stock market will not and cannot rally independently.

On the other hand, the investing community is completely sold on the idea that the Fed will backstop any stock market crash and bull market will continue for a long time after this speculative mini bubble has been settled.

We believe that the outcome of the presidential election will determine the fate of this bull market simply the NASDAQ has been so stretched in price and time.

Right now the NASDAQ is 23.04% over its 200-day moving average, it was 17.82% over its 200-day moving average in February 2020, which is the previous 4-year cycle high location.  It took 4 years (from February 2016 to February 2020) for the NASDAQ to achieve the four-cycle high, it only took five months for the NASDAQ to achieve a stronger position than the previous 4-year cycle high.  We are highly doubtful of the longevity of the bull market in the price and time perspective. 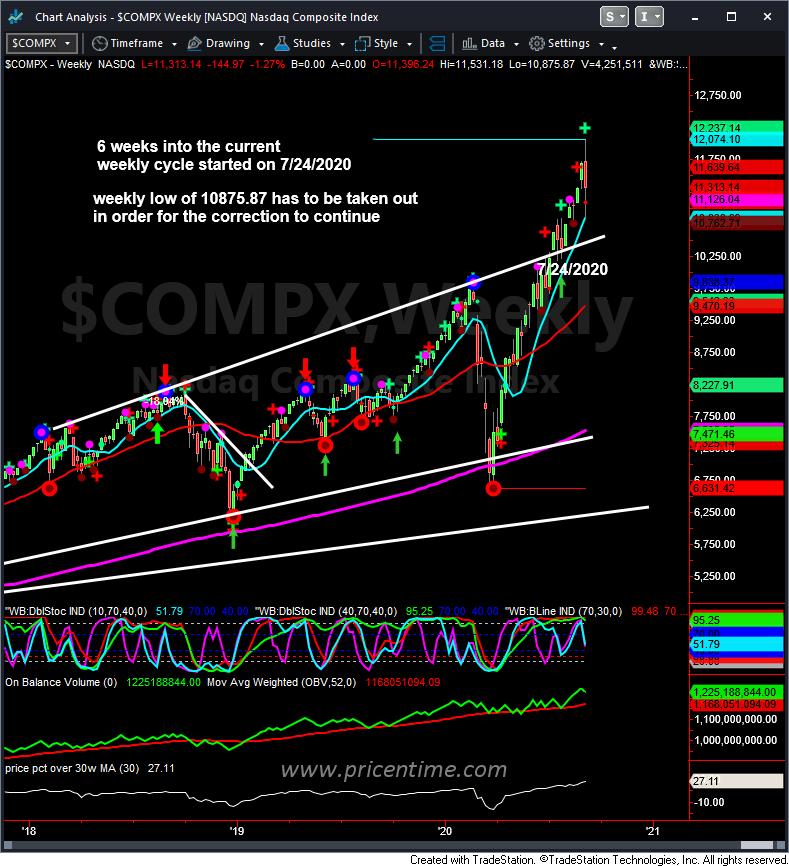 weekly cycle
This entry was posted on Sunday, September 6th, 2020 at 10:28 pm and is filed under Stock Indices. You can follow any responses to this entry through the RSS 2.0 feed. Both comments and pings are currently closed.