This is a very significant development in the stock market.  The smart money has mobilized and put money to work in the small caps instead of the old mega cap tech leaders.  This is the very signal that we have been looking for to confirm the resumption of the bull market that kick started in March 2020, in the depth of a pandemic fear gripped stock market.

This breakout in small caps also explained why the stock market has been going up while facing the uncertainties of the stimulus package and a presidential election. The market believes that the fiscal stimulus package will come either before or after the election.  The market also believes that if the blue wave (democrats win the White House and both chambers of Congress) takes over after the election, the fiscal stimulus would be bigger, which would offset the negative impact of higher taxes.

The central bank has done whatever it can be done in terms of monetary policy.  Fiscal stimulus packs a bigger punch than the monetary kind because it can channel cash directly to households or businesses, and it’s better suited for delivering targeted aid to those who need it most in a crisis, like the unemployed. Central bankers can only inject more spending power into the economy via an indirect channel: the price of borrowing from banks or financial markets.

The revamp of economic management that should have happened after the financial crisis a decade ago.  Back then, politicians balked at the size of deficits and debt.  Now the coronavirus has completed the regime-change. Fiscal policy, which fell out of fashion as an engine of economic growth during the inflationary 1970s, has been front-and-center in the fight against Covid-19. Governments have subsidized wages, mailed checks to households and guaranteed loans for business. They’ve run up record budget deficits on the way — an approach that economists have gradually come to support, ever since the last big crash in 2008 ushered in a decade of tepid growth.

From this point on, clearly we are living in a fiscal-policy dominated world, the central bank will take a backseat.  What does this mean for the stock market? It is super bullish because now we have the fiscal policy to support the consumers which in turn will support the stock market further.

The NASDAQ will continue to perform, but the law of big numbers will work against it because it is much harder for a one-trillion dollar company to double than a five-billion dollar company.  If you decide to invest in index, you should open a long position in IWM or TNA (3x leveraged small cap ETF) to capture the rise in the early phase of the 4-year cycle.

The economic news will continue to be negative with unemployment numbers, loan losses and bankruptcies.  But we should ignore those noises and pay strict attention to stock market.  The stock markets are forward looking.

In our private email we also noted that the residential solar and genomic sectors are breaking out.  TAN and ARKG are the two ETFs we recommend.

Technically, the current new daily and weekly cycle started on 09/24/2020.  It has been 2 weeks into the weekly cycle and 11 days into the daily cycle.  There is a tendency for a seasonal high to occur in October.  If indeed we have a seasonal high in October, then we should expect the low to occur in January 2021.  If there is no selloff after October, then we can expect a high in February 2021.

In either of the situations, we should take advantage of the volatility to get long of our favorite stocks.  This is a new era of fiscal support that we have not had in decades. 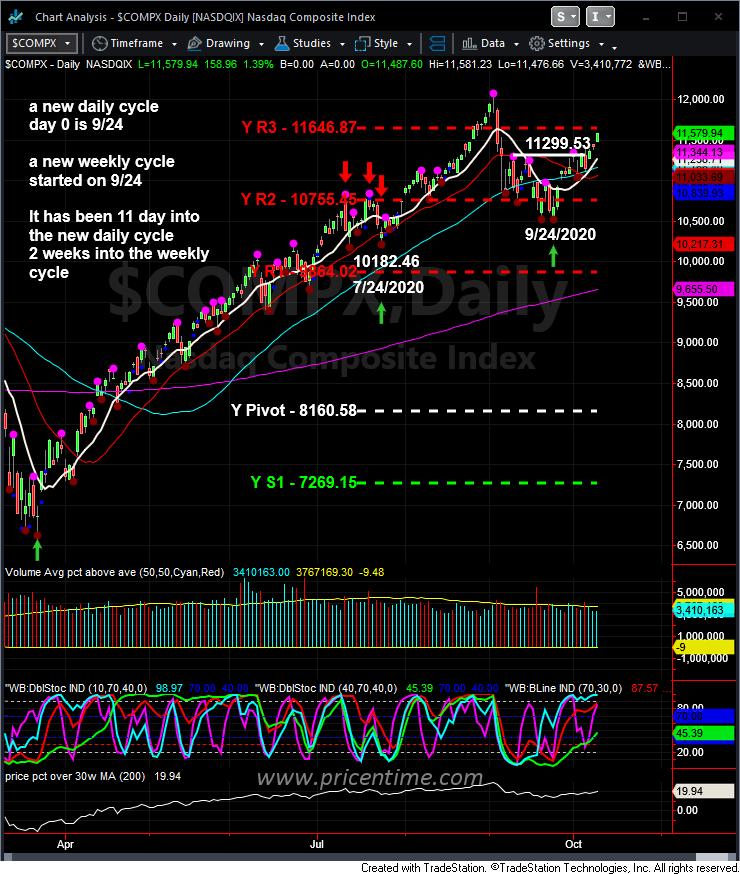 weekly cycle weekly cycle bottom
This entry was posted on Sunday, October 11th, 2020 at 10:06 pm and is filed under Forecasts, Stock Indices, Uncategorized. You can follow any responses to this entry through the RSS 2.0 feed. Both comments and pings are currently closed.