All Clear After the Panics of 2020

The year of 2020 has been proven to be nauseating, the amount of churns feels like being thrown in a washing machine on the spin cycle and not able to turn it off, between COVID, BLM, Election and the markets.  However, the market has been unemotional and faithfully carried out the cycles and is pointing to a clear path forward from here.

We started 2020 by making a new high in February and then crashed in March to take out 2019 low, which made a yearly outside reversal on the downside.  At the March 2020 low, it was extremely bearish.  However, the Fed stepped in with ALL force and turned the market around in March.  But the market participants were still skeptical, the rally was led only by the safety stocks (mega tech and stay home stocks that would work during COVID lock down).  In June, the market had a hiccup which was successfully supported by the Fed buying junk bonds directly in the market.  By the time we got to the September top, the market has rallied 23 weeks from the March low, which is an extended weekly cycle.  Having an extended first weekly cycle at onset of a four-year cycle is a very bullish signal, which means the rally is durable.  A bear market rally typically is very short and erratic.

The first weekly cycle low was made on October 30th, two days before the election.  Even when the election outcome was not conclusive, the market rallied on November 4th.  The market was just glad that the election was over, it didn’t matter that we didn’t have a clear winner on that day.  The rally on November 4th confirmed the validity of the October 30th weekly cycle bottom, especially now the risk-on stocks such as the DOW and small cap Russell 2000 indices are leading the mega cap tech stocks.

The fundamental news will continue to be negative with the surging virus and jitters of the power transition in the White House.  Please ignore all that and focus on the price actions.  The market is a forward-looking mechanism, it has already priced in all those knowns.  At this point, only the unknows will cause the market to change its behavior. 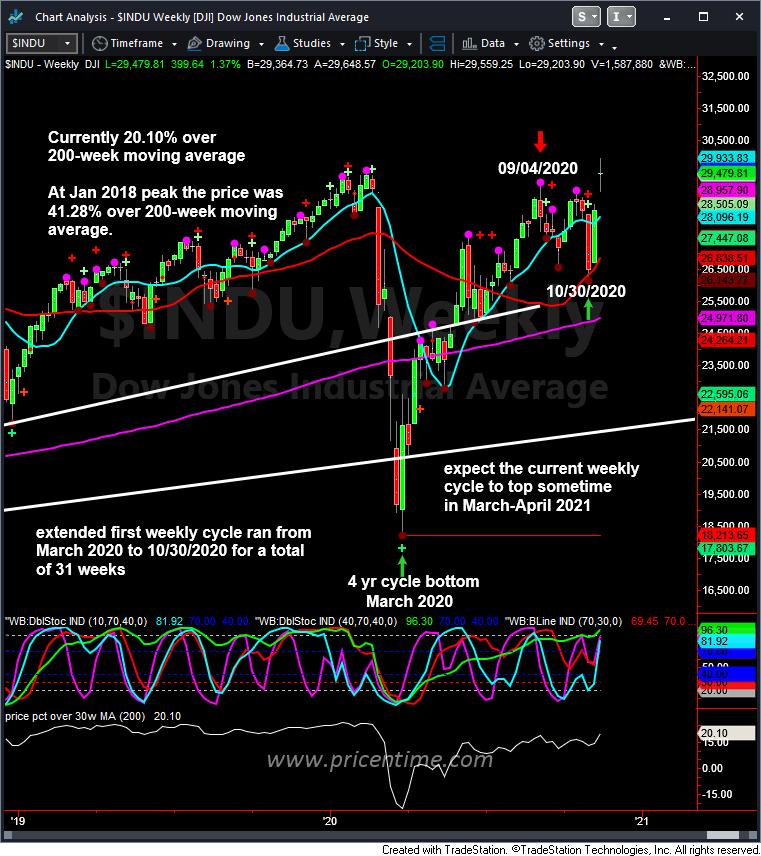 We hope our subscribers have taken long positions with PLTR.  PLTR broke out against its IPO high at 11.42 and rallied 38% (11.42-15.80) as of last Friday’s close in two weeks.  Normally when a breakout can achieve more than 20% gain in two weeks, you need to hold the stock for at least 8 weeks to capture the momentum.  PLTR is trading at 22 times price to sales right now.  SNOW, another recent cloud software IPO is trading at 125 times price to sales.  So PLTR is not over valued when compared to its peers.  We believe PLTR is misunderstood by the street due to its work with government agencies.

We are still holding KPTI and expecting it to move soon or sometime in March when it gets FDA approval for the 2nd line multiple myeloma indication.  KPTI recently announced positive clinical data with solid tumor and we believe the company will eventually realize the founders’ vision that Selinexor will be part of the core cancer treatment therapies.

Again, we are now in a new four-cycle and the best gains are made in the first two years of the new cycle.  Enjoy the ride!

SP 500 weekly cycle weekly cycle bottom
This entry was posted on Sunday, November 15th, 2020 at 6:29 pm and is filed under Hot Stocks, Member Only, Stock Indices. You can follow any responses to this entry through the RSS 2.0 feed. Both comments and pings are currently closed.