The DOW closed at all time high last Friday while the US capital was under mob attack on Wednesday.  The bull market doesn’t care whatever happens on the main street.  It cares only about the money, when there is so much money on the sideline, it has to go somewhere!

Rightfully the hot money found places in bitcoin, commodities and stocks.  This time it is not going into bonds.  The 10-year treasury yield just broke out 1% which is highly significant, this could be the beginning of a major trend change, meaning the interest rates will go up and inflation will go up as well.

Short term, we are looking at another trillion dollars to be injected into the economy after the new administration swears in on January 20.  There are lots of comparisons between the current mania and the DOTCOM bubble.  But it is not time to worry about the crash yet, because the money hasn’t finished injecting into the stock market yet.  We mentioned August 2021 and March 2022 as potential turning points in our previous blogs.  In our panic cycle model, we have found August 2021 to be a juncture that a major global contagion could be unfolding.  The German elections are supposed to take place in August.  Germany appears to be the epic center for Europe.  Bitcoin panic cycle is also showing up in August.  So we definitely keep a close watch on the mania and will send out notes immediately to our private members if anything changes.

Technically, it is 10 weeks into the current weekly cycle.  We are into the second phase of the weekly cycle which could last into February/March.  The DOW is the only index that hasn’t broken out.  The resistance is around 31200.  If it encounters this resistance and corrects for a little while, it is a good opportunity to get long.

We haven’t opened a long position in bitcoin as we are not sure if the worldwide governments would allow an alternative currency to co-exist with their official currency.  The central banks could issue their own digital currencies.  There are so much money to be made in the stock market.  We are not confident enough to take additional risk in bitcoin which could be banned by the government potentially.  We could be wrong on bitcoin, though.  The melt up in bitcoin will be met with melt down.  All things come back to earth eventually.

We are still holding KPTI which we will soon get out when it runs to 20 resistance.  KPTI is a good investment in cancer therapy, but we have found a better stock that we want to move money over.

Bionano (BNGO) is a genome analysis company providing tools and services based on its Saphyr system to scientists and clinicians conducting genetic research and patient testing and providing diagnostic testing for those with autism spectrum disorder (ASD) and other neurodevelopmental disabilities through its Lineagen business. Bionano’s Saphyr system is a research use only platform for ultra-sensitive and ultra-specific structural variation detection that enables researchers and clinicians to accelerate the search for new diagnostics and therapeutic targets and to streamline the study of changes in chromosomes, which is known as cytogenetics. The Saphyr system is comprised of an instrument, chip consumables, reagents and a suite of data analysis tools, and genome analysis services to provide access to data generated by the Saphyr system for researchers who prefer not to adopt the Saphyr system in their labs. Lineagen has been providing genetic testing services to families and their healthcare providers for over nine years and has performed over 65,000 tests for those with neurodevelopmental concerns. For more information, visit www.bionanogenomics.com or www.lineagen.com.

We have blogged about the genomic sector previously.  ARK Invest has been promoting the genomic sector and it has caught the fire with the wall street since March 2020.  There are two next generation sequencing equipment providers.  ILMN provides short read instruments, and PACB provides long read instruments.  PACB has better accuracy than ILMN. PACB has had an amazing rally since March 2020.

Now it comes BNGO.  It is using optical genome mapping (OGM) with Saphyr to analyze the genomes of patients with a variety of genetic diseases, blood cancers, solid tumors and repeat disorders as well as the studies supporting validation of clinical assays developed by Saphyr users.  BNGO has better accuracy than PACB and it could be paradigm shift in the genomic sector.

The stock has rallied from 0.49 to 7.24 when the investors caught up with the fever.  The company promptly raised money based on the investors’ fever.  The public offer price is 3.05, meaning institutional investors bought about 30 million shares at 3.05.  Last Friday, the stock went down because of the public offering, but it never went down to 3.05 which is a good sign.  We have opened a trial position around 4 last Friday and plan to add more.  The company will kick off its next-generation cytogenomics symposium to showcase Saphyr’s utility in genome analysis for genetic disease and cancer in the next five days.  The stock could be volatile in the next five days, the retail investors are very hot on it while the institutional ownership is quite low since it is so new.

Because it has rallied so much already, we were concerned that it could be a penny stock that’s been manipulated.  We checked out the management team (CFO came from Tesla) and the technology whitepaper.  We decided that it is for real.  Please do go to their website to check it for yourself.  This is a small cap with low institutional ownership.  KPTI is a safer bet because it has a very high institutional ownership and FDA approved products.

So right now the market is super bullish.  It could encounter a little selloff when the DOW meets 31200, but we expect it to power through. 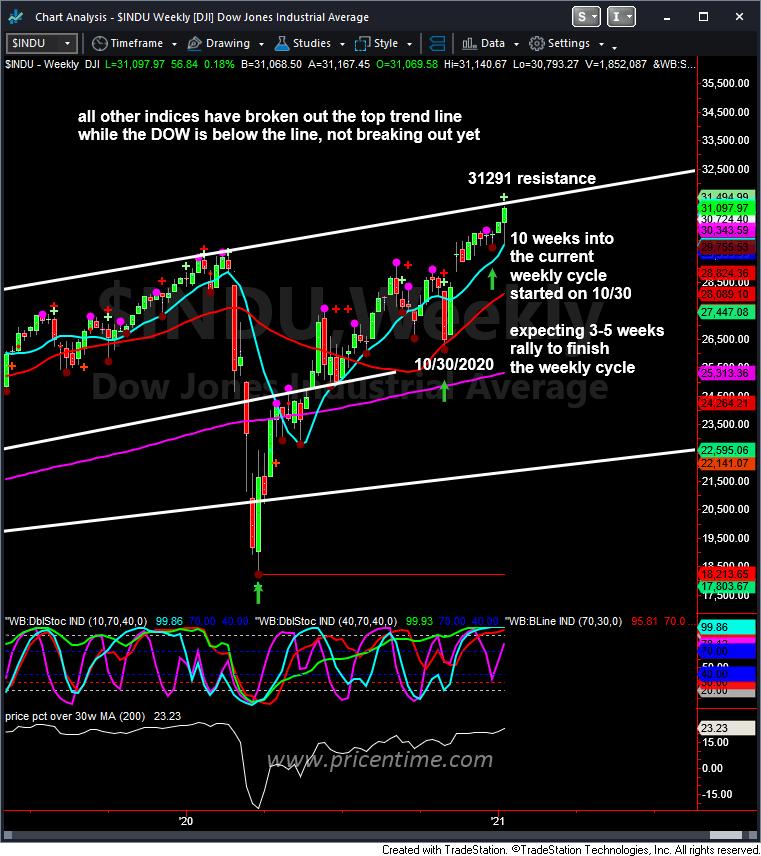 Member Only SP 500
This entry was posted on Sunday, January 10th, 2021 at 8:12 pm and is filed under Hot Stocks, Member Only, Stock Indices. You can follow any responses to this entry through the RSS 2.0 feed. Both comments and pings are currently closed.