Sideways to Down Movement

Last week the Biden administration unveiled a new $1.9 trillion stimulus plan.  The market took it lukewarmly without a rally.  The chatters about inflation/higher interest rates are turning up.  There are some big wall street whales calling for inflation on the horizon which will kill the bull market.  We agree that the bull market will eventually be busted either through high inflation or some black swan event such as the pandemic.  But right now, it is not the time to worry about it yet.  The stock market can go up with the rising interest rates up to a point.  We are far away from that point.  There is speculative fever in the small cap stocks which will be selectively corrected at some point of time down the road.  The stay home stocks have been selectively corrected without causing the general market to go down.

Since the weekly cycle oscillators have turned down, we expect the market to enter the weekly cycle high to low phase.  Under normal market conditions, this is the place that you can place a short bet because a weekly cycle high to low phase normally would have good amplitude on the downside.  Under the current market conditions, we would not trade on the short side because there isn’t enough downside momentum to make the trade worthwhile.  Instead, we will focus on opening new long positions.

Technically, it is 11 weeks in the current weekly cycle that started on 10/30.  We expect this sideways trading to last until mid February.  While the general market is trading sideways, the small caps could be experiencing bigger corrections since the small caps have had outsized gains relative to the large caps.

Last week we made outsized gains in BNGO stock.  The company had a five-day event broadcasting to the world how great the new genome optical mapping technology is.  The retail investors went crazy and traded it with huge volume.  We are completely out of the position and will try to get back in the next few weeks.  It is not sustainable to have such volatile trading all the time.  It will cool down and there will be opportunities to get back in.

ARKG and ARKK had a fabulous 2020 performance and they have attracted shorts.  There are good amount of bearish bets on ARK’s ETFs.  The street doesn’t believe Cathie Wood’s hot streak would continue unimpeded.  We believe ARK could continue its hot streak unimpeded because of the sheer amount of retail investors following her and the amount of money on the sidelines.  Every ARK’s stock is a story stock with incredible growth stories.  In a speculative bull market, buying MacDonald’s stock is not exciting, it doesn’t matter how many creative new menus MacDonald’s have come up with.  We are still early in the 4-year cycle, so if you want to have exposure in the new economy stocks, you could open positions in ARKG and or ARKK. 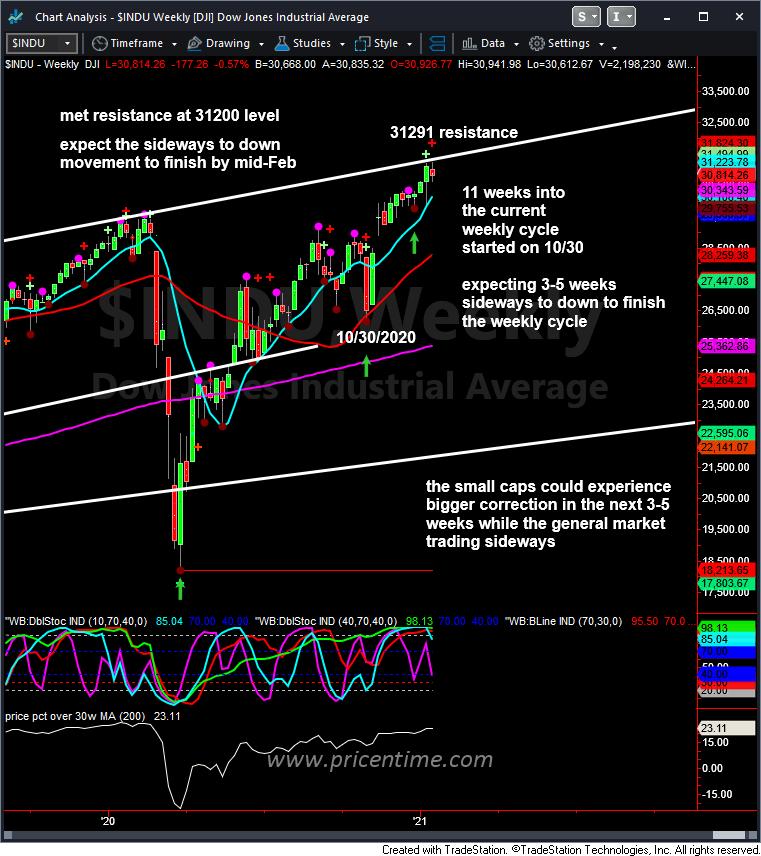 SP 500 weekly cycle bottom
This entry was posted on Sunday, January 17th, 2021 at 7:38 pm and is filed under Hot Stocks, Stock Indices. You can follow any responses to this entry through the RSS 2.0 feed. Both comments and pings are currently closed.