The DOW Is Curiously The Laggard

Last week the NASDAQ and small cap Russell 2000 had a great week, yet the DOW is lagging, just can’t breakout the 31,200 level on closing basis.  The weekly oscillators have turned down despite the DOW making a new intraday high last week.  The DOW’s highest weekly closing occurred two weeks ago.  Why the divergence?

We don’t know the reasons why the DOW is stubbornly lagging the other major indices.  One can speculate that the international money is not flowing into the DOW because they are not so sure about the impact of the policies from the new administration.  They are waiting for more clarity, hence the lagging DOW JONES index.  Back in the DOTCOM bubble era, the NASDAQ and S&P 500 kept going crazy in February and March 2000 while the DOW topped in January 2000.  Could the DOW be hinting a correction due in the next 1-2 months?  It could well be, because the Covid vaccination distribution has been patchy and news of the new strains of the virus kept popping up.  The Biden administration just issued more international travel ban.  The Biden administration is also lobbying the Republicans very hard on passing the additional stimulus package.  Do they know more about the severity of the uncontrollable virus more than the general public?

The bitcoin topped in January, could the bitcoin also be flashing a stock market top?  We believe it is more likely to have a correction in the next few weeks than a continued rally unimpeded from this high level.

Speaking of the coming correction, are we going to close out the PLTR position after it rallied 25% last Friday to close at all time high?  We have two batches of PLTR position, first batched was opened near DPO price and the second batch was opened during the previous correction period from last November to last Thursday.  If the general market is not this toppy, we would let the PLTR position to run.  Since the general market is so overbought and the correction could be coming soon, we might close out our second patch PLTR position next Tuesday.  On January 26, PLTR is giving a high profile live demo of their products and use case studies.  The 25% rally came from a little news release that the company did APOLLO software update 150,000 per week in Q4 2020 and 40,000 update per week in Q2 2020.  The near four fold increase of software update made investors speculating that PLTR will report an earnings surprise in February 2021. Three days after Q4 earnings release, the DPO lockup period expires, meaning a lot of shares from the existing investors become available for sale.  Combined with a pending market top and DPO lockup expiration, PLTR could enter a correction based on these two catalysts.  Other than these two reasons, we don’t see how PLTR will not out perform the general bull market.

As of last Friday, PLTR market cap is $57 billion with price to sales ratio at 45, which is very expensive.  If the company reports a crazy $2 billion 2020 earnings which is twice as the guidance, the current price to sales ratio is still very high,which makes it a very expensive stock.  But a bull market will continue to reward an expensive stock like PLTR, not so much in bear market.

This pending top is not a DOTCOM styled bubble top, so if you don’t take profit of the position, you will be fine by riding it.  It’s very difficult to get in and out of positions, the market always wins.

Technically, 33.60 which is 10 cents about the previous 52-week high at 33.50 is a breakout buy.  If the breakout continues without interruption, the minimum next target could be 40-50.  The only thing can stop the breakout is the general market correction.

BNGO is another super runner.  The company did a secondary offer at $6 per share for over 33 million shares which crashed the stock from near 10 to low 7’s in pre-market trade.  The stock never came close to 6.  It traded very technically to test the prior high at 7.24 in pre-market on January 20th.  Then it rallied in the last two day to close at all time high last Friday.  The highest intraday high was 10.  So technically 10.10 is a multi-year breakout buy.  Again, this breakout will only be interrupted by the general market correction.  It seems that the retail investors are ahead of the institutional investors in this stock.  We still have some BNGO position, will buy more on Monday.

Below is the DOW weekly chart, which clearly shows the cycle oscillators have turned down. And it is clearly contained below the upper trend line. Be cautious, that is all we can say at the moment. 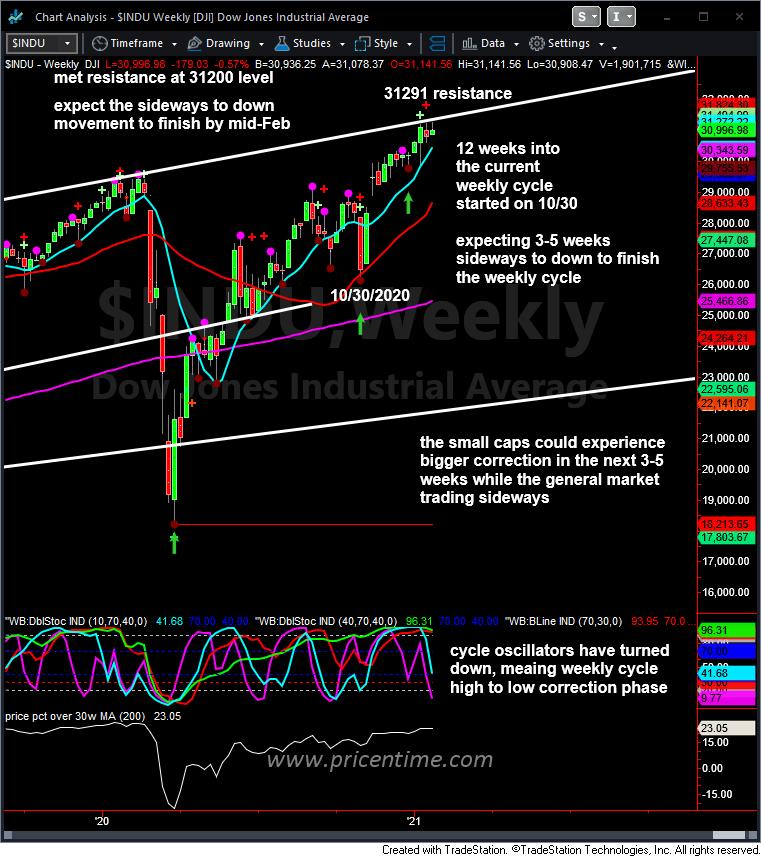 Member Only weekly cycle
This entry was posted on Sunday, January 24th, 2021 at 9:22 pm and is filed under Forecasts, Hot Stocks, Member Only, Stock Indices. You can follow any responses to this entry through the RSS 2.0 feed. Both comments and pings are currently closed.