Watch for Seasonal High in May 2021

Now the laggard DOW has gathered strength and closed at the upper channel line on the weekly chart.  The weekly oscillators have turned up and is getting ready to march with the rest of the indices.  The pundits are calling for the market valuation is too high, but the treasury sectary Yellen and other members of FOMC have been openly stating that the market valuation is justified considering the extreme low interest rates.

We tend to agree with the charts.  The charts show clearly that the bullish trend is intact.  Based on the weekly chart, it is three weeks into the weekly cycle that started on 01/29/2021.  We expect the current weekly cycle to top in early May 2021, which is the location for a seasonal high.

On the daily chart, all three major indices are making a daily cycle bottom, which is why the market has been sideways in the last week.

Palantir PLTR had a very volatile week of trading last week.  The DPO lockup expiration caused the shorts to jump on the stock, tried to get ahead of the lockup.  The 24.50 bottom is in, which is almost 62% retracement from the low of 8.90 to the high of 45.  Since the lockup expiration is not done in 1-2 days, we expect the stock to build a base before it can take off.

During the selloff, ARK Invest bought more than 6 million shares, which are in addition to the shares they have bought in the past.  ARK Invest chief investment officer Cathie Wood is very confident about PLTR’s future.  She particularly liked how aggressively the company is focused on its long term outlook instead of quarter to quarter results to please Wall Street.  PLTR is guiding 30%+ compound annual growth rate for the next five years.  We believe the company will meet its guidance and perhaps even over deliver in the next few years.  We are holding a large position and also trade a portion of the position around the volatility.

Below is the DOW weekly chart.  We expect the current weekly cycle to top in early May. 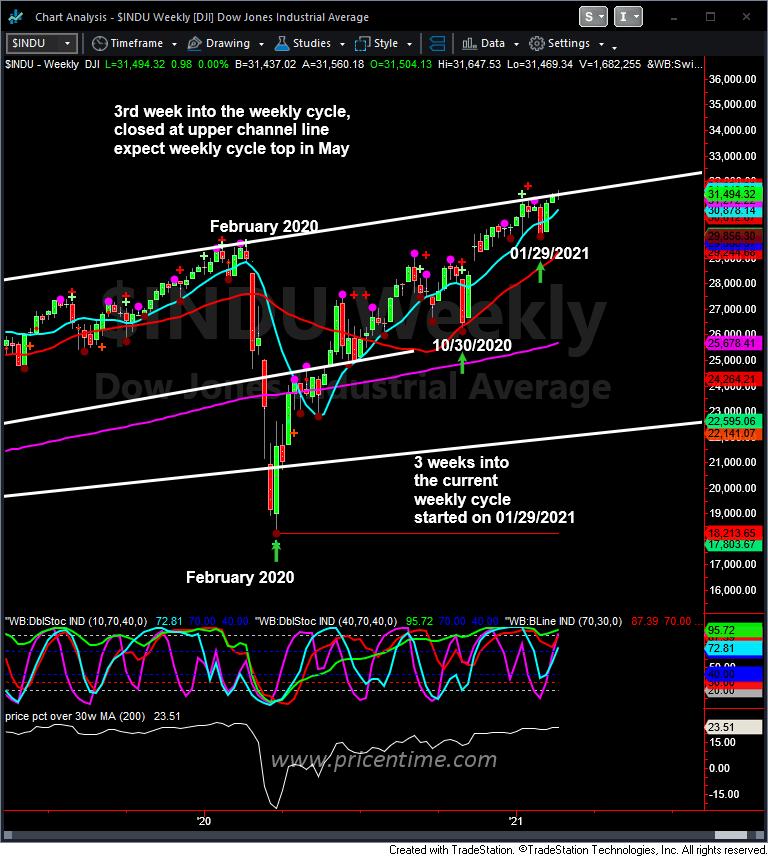 Member Only SP 500
This entry was posted on Sunday, February 21st, 2021 at 8:06 pm and is filed under Hot Stocks, Member Only, Stock Indices. You can follow any responses to this entry through the RSS 2.0 feed. Both comments and pings are currently closed.